The Great Human vs AI Challenge

Did you know that it is almost 25 years since Skynet became self aware?  I thought I would test whether or not the old girl was still up to snuff.

Play 10 games of Race For The galaxy on my iPad whilst I am walking up in the morning (see I'm already finding reasons why I lose), log all the win scores and then crunch the numbers in excel.

Only completed games are recorded and there is no quitting except in the event of a game crash (it happens surprisingly often).  The AIs are set on Hard and play uses all the expansions available (New Worlds, Gathering Storm, Rebels vs Imperium and Brink of War).
It will be interesting to know if any patterns emerge among the AIs and whether or not my win rate improves as I play more games.
I have done this challenge before in the first lockdown and despite playing 1000 games I only managed a 25% win rate which is probably the same as the random chance score in an ESP Test.

Race for the Galaxy The RPG?

Unlike other CCGs like Magic the Gathering, R4TG has no  flavour text on the cards despite the huge potential to do so contained within the theme.

If you are active on Instagram check out @r4tg_2022 which is one person's personal project to add a narrative roleplaying element as he plays the game.

As I write this I am 1 week into the challenge with 70 games completed.  Scores on the doors please George Dawes! 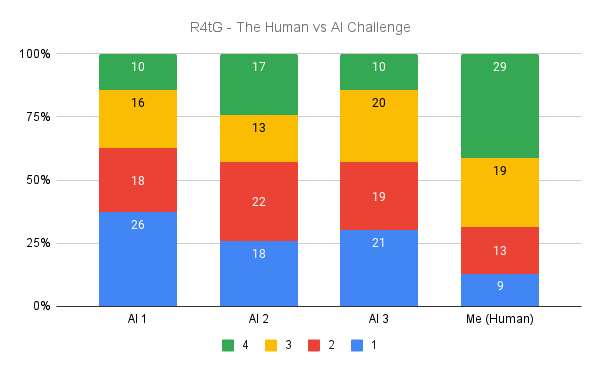 What a diabolical start to the challenge. Lets hope that my play improves considerably going forward.
If, like me, you think that Race for the Galaxy is the greatest card game ever invented shout out in the comments below and if you have a Race for the Galaxy blog send me the link.
Posted by Tony Bro001 at 09:00