Since returning to regular sessions of in person roleplay at Dragons Keep Roleplay Club, I have a hankering for GMing some more Judge Dredd.

Don't get me wrong, I love the detail and gorgeousness of 28-35mm scale miniatures, but when I represent the citizens of Mega City One I want there to be lots of them.  The niche nature of the subject matter means that there are few alternative miniature options other than the classic Laserburn Lawmen (now produced by Alternative Armies) to act as proxies for Judges.  I am fortunate to have amassed quite the collection of these minis over the years so my Justice Department is at full capacity.

But What About the Bad Guys?

The Law is a bit redundant if you have nothing to crack down on but there are a host of Sci-Fi crew and civilians to act as perps with a bit of creative license and a generous dollop of milliput.

I need some fatties to bulk out my perps roster so with a dab of milliput to add on a few extra pounds you have instant fatties.  These guys tend to always be pictured wearing one piece tracksuits so painting was a breeze - These particular civillians were from Ground Zero Games Stargrunt range and come in at a not unreasonable £3 for eight figures (specifically packs SG15-V01 & V02). 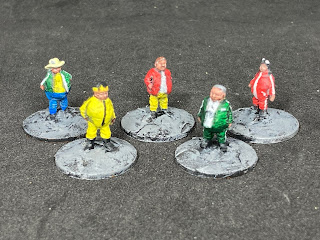 Often overlooked by most citizens the humble robot has replaced human labour for 96% of the population of Mega City One and whilst not as numerous as their fleshy counterparts no Judge Dredd story would be complete without a robot or three.  These bots come in many varieties:

Humanoids (GZG SG15-V16) for all those tasks that having a human shaped body is absolutely the best solution.  Jobs like Crash Test Dummy, Exotic Dancer, Waiters, Butlers, Supermarket Checkout Staff and of course Traffic Wardens. 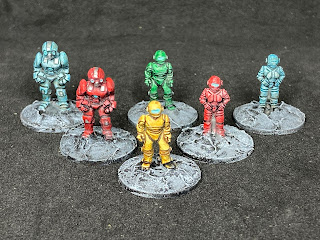 Work Bots (GZG SG15-V13) who are often employed doing menial dirty jobs.  The Wall-E's of this world who maintain the sewage system, unclog the resyk conveyors or sweep up after the inconsiderate humans they are programmed to serve. 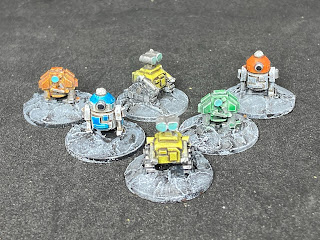 Security Bots can come in all shapes and sizes but mobile spider bots seem to be the flavour of the week and I particularly liked these Spider Drones (GZG V15-84A) as they reminded me of the Tachikoma's from Ghost in the Shell and those stupid fuzzy hand puppets from kids TV back in the 80s. 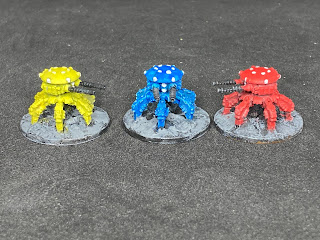 I think you would be hard pressed to find a more classic alien race than the Kleggs.  Giant stupid war mongering crocodile headed mercenaries employed by the mad tyrant Judge Cal during his short lived reign of terror.  The beauty of 15mm is that you don't feel cut up about literally cutting up your new miniatures as they are so stupidly cheap.  This trio are made from two seperate minis; HOF 69 Draccian Lord and Warriors donated their heads to be put on TW15-DG01 Draughar bodies. 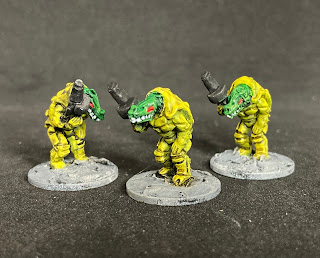