Real life events once again got in the way of my screentime and life appears to be giving me a bit of a punch in the guts at the moment.  However, I did manage to slip in one long awaited movie and a bit of an epic historical espionage thriller. 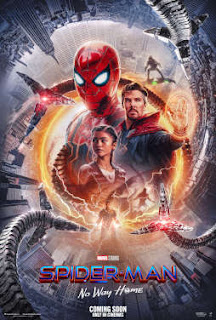 I was really looking forward to this latest outing of Tom Holland's Peter Parker and to be fair it was a pretty good movie if you view it through the lens of setting up the Multiverse of Madness story arc.  As a standalone spiderman movie it kind of sucked.

I totally get what they were trying to do with the premise.  Bring back some characters from yesteryear, fan favourites.  It was a neat idea which fell flat in execution.  We have seen this spider-man fight, as a member of The Avengers, much more imposing and dangerous villains than those from his past and they just seemed so provincial.  Moving the focus to helping and not killing them was something new but I just didn't care enough about them to feel empathy towards them.

Live action Doc Oc was always a talker rather than a doer and whilst I always enjoy seeing Alfred Molina on the screen, this role is really beneath him.  I did like that he accepted his redemption with grace and humility which made him seem like a much more complex character than perhaps his earlier outing gave him credit for.  However, Sandman was always a pretty pathetic character, Electro's alter ego was more interesting than he was and Willem Dafoe's green goblin was only interesting when he went full goblin.

It was nice, but a bit weird, to see the other spider-men, although Toby Macguire is really starting to show his age.  This felt like they were trying to reference Spider-Man into the Spider Verse but in a much less satisfying way.  Each has their own cautionary tale for the MCU spider-man and this was painfully self aware such as referencing the back problems, the "Amazing" prefix etc etc.  I'm not adverse to a dollop of fan service every now and then, but this was really quite heavy handed.

Ultimately the film is a two hour prelude to a quick and largely down beat finale in the last 30 minutes.  I felt quite depressed by the ending and I hope that this will ultimately be resolved in future MCU movies because I truly felt that everyone got a raw deal at the end of this movie.

Perhaps this is the MCU's defining moment, it's Empire Strikes Back middle film, it just definitely wasn't what I expected of a spider-man movie. 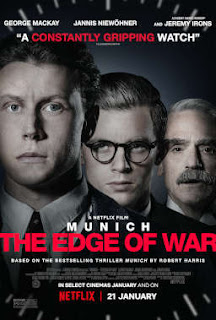 Wow, what a movie!!  This is a real tense espionage thriller set against the backdrop of impending war and the Munich peace conference.  Wonderfully cast with the ever classy Jeremy Irons who blows everyone away with his portrayal of Neville Chamberlain, but some creditable performances by some younger faces.

This movie is based on the best selling book by Robert Harris and is an insight into the year long prelude before the outbreak of WWII which gave the Allies the time to prepare to win.  Chamberlain has been treated quite badly by history, mostly through the benefit of hindsight, and this movie goes someway towards trying to explain the events surrounding the peace conference and the famous piece of paper waving moment which ultimately defined his Prime Ministership.

It's a beautifully crafted movie with perfect pacing and stage craft which is rare from Netflix.  Every moment is engrossing and the viewer feels like they are transported to Autumn 1938 and that they are a fly on the wall at a pivotal moment in history.  The last time I felt like this was when I watched the masterfull Churchill.

This movie manages to pull off the almost impossible, a war movie without any war.  I recommend any real cinefile should put this on their bucketlist immediately.