This post might be controversial but when I am running my games I don't like my players knowing how many hitpoints they have left.  I know, crazy right...

The core concept behind this is my use of 5x3 Record Cards as a sort of mini character sheet to record each character's current Initiative, Hit Points and any interesting side effects they may experience in combat.  Each character has one, but so do each of the monsters or NPCs that are engaged in the combat.

A used Initiative card will look something like this 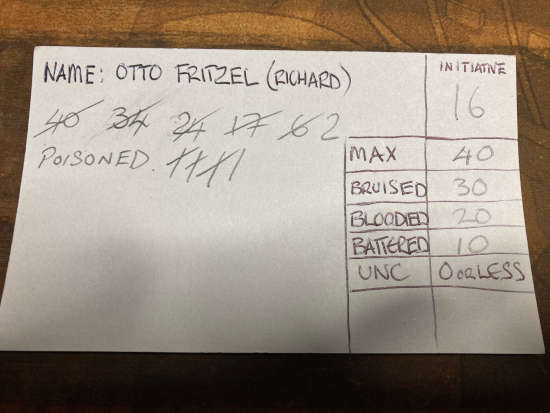 When the combat ensues the players write their initiative in the corner of their Initiative card and hand it to me.  I roll for the monsters and do the same.  These cards are then sorted into descending numerical order and the combat begins.  My role as DM is then to tell each player when their characters card comes up and they can resolve their action.  when they take damage I roll and record the result and then tell them how wounded they are.

In the Real World there are no Health Bars

In real life, if you become injured you don't know how close to death you might actually be.  Beyond the sensation of pain or a physical cut, stab wound or a broken leg you really have no idea if you are about to shuffle off this mortal coil or bleed out in 10 hours.  Cut to the RPG and we've all had the experience of taking the fight to the enemy even when we are on our last hit point.  Does that seem like the action of a hero to you?  It's the not knowing if you are going to make it which makes the self sacrifice heroic.

Enter the concept of Wound States these are simple subdivisions of your characters hit points into one of 4 wound states:

When you get damaged by an opponents attack that moves your character into a new wound state then I will update you.  Armed with this knowledge It is your decision to push your luck and to continue to fight or not.

The inspiration for this push your luck mechanism was in the video game Driver 2 (correct me if I am wrong) in which you had to hazard a guess at how physically injured you were by the increasingly laboured way the character walked.

I don't know about your players but some of mine are want to loot bodies and stash those special items before announcing that they didn't find anything.  Sometimes I want to drop a hint that they might have discovered something during combat that they don't realise is important until after the fight is done. The initiative card system allows me to do this effortlessley without breaking out of combat unnecessarily or telling the world and their wife what only the character should know.

Am I still Crazy?

Now that you've heard about it, what do you think?  Am I still a madman or is this a technique you'd like to inject into your games?  Answers in the comments below.