A random post on twitter reminded me that we are now living in the year of one of the greatest genres roleplaying has ever known.  Cyberpunk 2020. 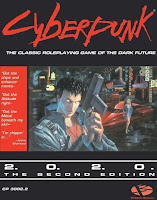 I have been a fan of the genre since discovering it in the early 80s through the literary works of Gibson, Sterling, Williams and Effinger. Visual stimulation came in the forms of films such as Bladerunner, Akira, Bubblegum Crash, Black Magic M66 and Ghost in the Shell.

It changed the way I looked at technology and society and changed my future career choices.  I was never much of a punk but I immersed myself deeply in the dark gritty disposable future of a new breed of heroes.

The new 20s sees the cyberpunk alive and kicking in the form of the much anticipated video game Cyberpunk 2077 and a new version of the RPG from R.Talsorian.