I blogged recently about Starblazer Comics the small format sci-fi stories from my childhood.  Thanks to eBay a few more dropped onto my doormat this week. 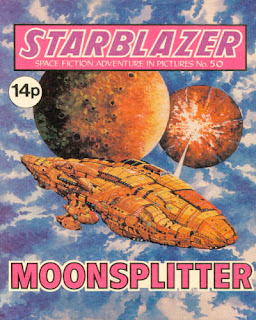 #50 - Moonsplitter - Out of the cosmic rim, one of the many Galactic wars raged. Only one thing stood between the Earth Galac-Squad as it swept triumphantly towards the Mease aggressors homeworld - An impregnable armoury on the barren planet known as Silicon IV.  General Larz Pluto (love it) readied his Earth forces for an invasion that would end the war.

Issue 50 marks fearless Fighting-Scientist Hadron Halley's first appearance as he fights off the Mease to save some Galac-Squad soldiers on the planet Silicon IV.  Halley uses his gadgets and his knowledge of science to single handedly defeat the bald-headed Mease and get back to the safety of a Terran carrier only to find that General Larz Pluto has been captured.

Halley mounts a one-man rescue mission and infiltrates the Mease base, locates the Genral and makes a bid to escape.  The interior design of the Mease base is really interesting and features numerous psychedelic looking geometric patterns which wouldn't look out of place in a Zenith strip.  Curiously the Mease also seem to use the English alphabet, which is handy.  The titular moonsplitter device makes its debut and the Fi-Sci command use it to bombard the mease base with moon fragments utterly devastating the planet, but that's okay because they are the good guys... right? 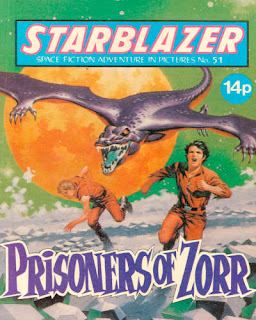 #51 Prisoners of Zorr - By the year 2382 Earth was the administrative centre of The Galactic Foundation.  The gigantic Sandpoint Military Academy trained a multi-planetary peace-keeping force and the highlight of each year was the passing out parade when only the best pupils qualified.  The planet Zorr had observers present... and they were interested in only the best.

Cadets Sol and Hammond are top of their class at Sandpoint (a potmanteau of Sandhurst and Westpoint) and due to graduate in a few days when thay are kidnapped by mysterious alien observers and transported to a prison compound on the planet Zorr.

Along with cadets from other worldsthey are subjected to batteries of tests and arduous training exercises to turn them into the ace pilots that the planet's ruler Zorr needs to fly his Dragon Ships and conquer the galaxy.   Will they escape the prison and overthrow this evil dictator?  Will they ever see Earth again?

A typical Starblazer tale as our heroes dash from one death defying encounter to the next.  There is definitely a WWII vibe about this issue, the bad guy, Zorr, looks like a cut price Mussolini and the Zorr soldiers have a mild Nazi look to them.  I was most surprised to see Zorr and General Valcan ride in on a sci-fi version of the WWII manned torpedo known as The Chariot. 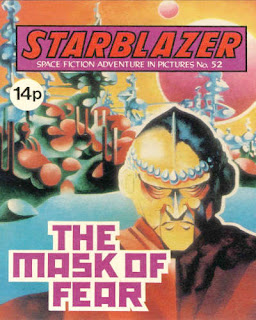 #52 The Mask of Fear - By 3000AD Man had spread out and colonised worlds among the stars.  With men, went crime. Wealth and position were highly prized, and life was cheap.  Desperate men did desperate things to achieve wealth and position - even destroy entire worlds.

When a mysterious group of three criminals destroy the planet Deltan they murder millions of innocent inhabitants including the family of Special Agent Hart Tallis.  His mission is to bring the three to justice and to seek revenge.  A fairly simple galactic manhunt as Tallis follows the few clues he can piece together.  Fortunately for him he grew up on a heavy G world he is more than a match for most of his assailants.  One by one he tracks down the members of the group of three and uncovers more evidence of their intergalactic crimes until he finally comes face to face with The Mask.

Only one question remains... Is the mysterious Mask someow related to Diktor Van Doomcock Future Ruler of Earth? 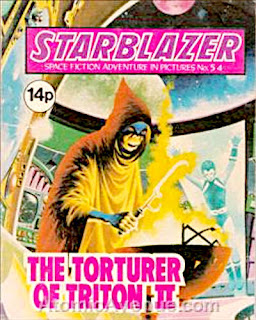 #54 The Torturer of Triton II - The Terran Galc-Squad were the prime fighting and exploration force of the year 2280, ready to space-warp to trouble spots anywhere within the star-systems of Federation space.  Galactic conflict was a complex business, and could involve forces beyond the experience and understanding of an ordinary galac-soldier.  To meet this challenge, a specialist unit was formed, men who had the brain power to understand science, combined with the strength and courage of a fighter.  They were called the fighting scientists and their outfit was called the Fi-Sci branch of Galac Squad.

Another Hadron Halley adventure, which opens with him deliberately crashing his shuttle into the docking bay.  What a joker!!  But wait, he survives certain death using a force-field shell he has invented.  That's going to be important later on.  The art in this issue is top notch although some of the spaceships look like they were inspired by legendary spaceship artist Chris Foss.  The one of page 31 bears an uncanny resemblance to the Jodorowsky's Dune spaceship.  The cover art depicts the evil Torturer of Triton and reminds me of Thundercats villain Mumm-Ra.  The evil aliens of the story look pretty good even if they are only wearing what look like silver underpants! 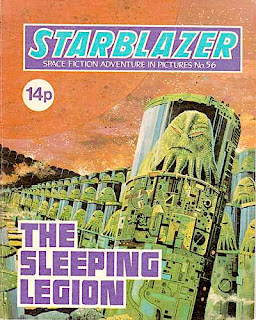 #56 The Sleeping Legion - By the year 3500 Solar powered space craft had blazed man across the Galaxy.  Each passing star was an energy source, charging solar panels that fed unbelievably powerful engines.  Thus was the Milky Way explored until only the galaxies beyond remained a mystery.  Man was too busy forming the Galactic Commonwealth to take up this new challenge, so unmanned probes were sent outside the galaxy.  These reported the existence of strange, alien cultures, and armed forts were built around the galactic perimeter in case of need.  But when those forts were eventually attacked they proved useless against the might of the aliens, who at all costs had to be prevented from activating their sleeping legion.

Our heroes this week are Crane, an eyepatched wannabe Snake Plisken and his trusty droid UNGO or UMGO (The letterer seems to have had a bad day).  The aliens from the planet Largos bear a striking similarity to TMNTs Kang and once again seem to be dressed in nothing but metallic underpants.

Crane has a real time of his life and ends up getting swallowed by a giant metal right off the cover of Judas Priests, Screaming for Vengeance. The alien art is really outta sight.  We have aliens in mobile guard towers that look like Wallace's wrong trouser's, Blobs that live in frozen craters, an alien spider that looks like it overdosed on H.R. Gieger's Biomechanics, but nothing quite prepares you for the sight of Crane in his space suit. 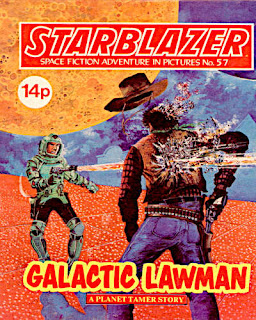 #57 Galactic Lawman (A Planet Tamer Story) - The Planet Tamer!  Throughout a lawless universe the name was spoken in whispers.  Just who was this mysterious instrument of justice.  Part man and part machine?  none could say for certain, but one thing was sure, wherever Evil went The Planet Tamer followed, and The Planet Tamer punished!

Our story opens on the prison ship Negril (which is also a resort town in Jamiaca) where the monosyllabic Molok, a being of pure Evil with the good looks of Brian Blessed, is none too pleased with being de-corticated.  Meanwhile in a cheap knock off Westworld the Planet Tamer arrives to arrest galactic fraudster Lorix.  With the crook swiftly apprehended and the entire pleasure dome time bombed until the space police can turn up, the Planet Tamer jets off on his space scooter towards Pados 12.  Enroute he encounters the wreckage of the Negril and learns that Molok and some convicts have escaped to the planet below.

So begins a manhunt across the galaxy but we also discover much about our hero the Planet Tamer's history.  He was once a UPO Marshall called Jubal McKay before he was injured.  His paralysed body was rebuilt by a ceybernetics expert in some Robocop like experiment.  Catching up with Molok we discover that the de-corticator has somehow given the crook the power to manifest creatures made of ectoplasm.

This week's issue throws the kitchen sink of plot devices at our hero and then some.  How did it all turn out, well I;m not telling so you will just have to read it yourself. 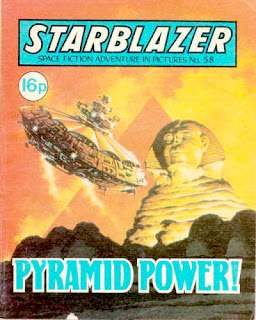 #58 Pyramid Power - After the Great Galactic War of 2482 an uneasy truce was established.  Many worlds joined a concordat to forge a lasting peace, but hte most powerful single nation, the Pugnarions, declined to take an active part.  They saw peacekeeping duties as an increased burden on their powerful spacefleet's patrolling capabilities.  Eventually, in 2492, the Pugnarions were persuaded to take part in the Amity Day celebrations.  In honour of this event they agreed to display their legendary symbol of power - the priceless ancient diamond - The Pyramid of Pugnaria.  A Concordat vessel was sent to transport the diamond along with other treasures to Centros, the Concordat capital.

The early 80s were the golden age of mysticism history authors like Eric von Daniker and this Starblazer's click bait (before click bait was a thing) title suckers us into a gripping tale of intergalactic heist whodunnit.

Investigator Petrie (he's a real dish) enlists the assistance of Professor Calegh as they track down the jewel thiefs before the Pugnarions lose their patience.  On the planet Kanthus they stop a mugging and with their new friend in tow hit the space pub (aka a fluid replenishment centre) and embark on a manhunt to find some aliens who never take off their spacesuits.  That's ruddy mysterious!

On Rogus they find an ancient egyptian tablet they return to earth to the egyptian museum to have it translated, the professor has seen the tablet before along with the spacesuited aliens and in a flash they are off to Sadalmelek.  Flitting from one planet to another is a trope within Starblazer stories.  If you haven't visited at least 4 alien worlds per issue then you feel a bit short changed.  The aliens (Xsilith) have been placing transmitters at strategic locations throughout the galaxy and use pyramid science to harness the energy of five suns energy creating a super weapon.  Surely it would have been easier to build a death star...