Cast your mind back to 2003 when WotC released the D&D Miniatures Game.  Each set came with a 5"x8" single sided cardboard map tile.

The D&D Miniatures Game was essentially WotC's attempt tocreate a D&D miniatures Collectible Card Game and cash in on the popularity of Pokemon which was everywhere at the time.  This isn't meant as a slight, basically every games company was trying to do the same.  It was popular among regular D&D players as a cheap way to get officially licensed versions of painted miniatures for your AD&D Game (3.5 at the time) and was instrumental in introducing D&D to a whole new audience of young players.

These maps are a useful addition to the Game Master's arsenal of tools either for inspiration or for that on the fly dungeon, the one that is inexplicable and doesn't make any sense.

A complete archive of the map tiles seems nowhere to be found.  Come on internet do your thang. 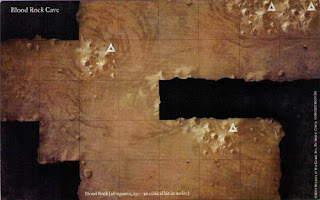 If you know of anywhere that has a complete listing of the tiles which were available or you would like to share your memories of playing the Dungeons & Dragons Miniatures game please feel free to use the comments section below.