Sersa V at Save Verus Death posted some nice papercraft obelisks which I had to build.   Perhaps this will be all the encouragement I need to run the Desert of Desolation again.  Here's a pic of how they turned out: 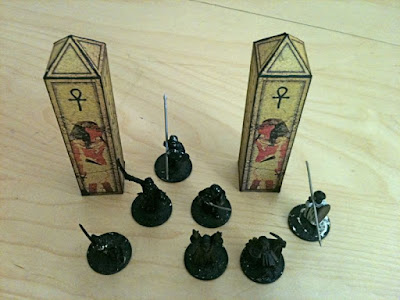 Cliche avoidance... or 4 ways I've put a party together through enforced captivity.

I know I've been guilty of using the "Bar Brawl" or the "Adventurer's Noticeboard" cliche's every once in a while but here are a few of the other ways I've brought a party of PCs together:

"It's a lovely summers day and the grass is even tastier than it was yesterday."

This was the opening line in a Justifiers RPG scenario where the PCs were all beta-humanoid sheep. They had been on a mission, to investigate the dissappearance of a fellow Justifier team, which had gone horribly wrong and they began the adventure in a pasture having been subjected to a neural wipe without any memory of themselves, their past or their species. Over a couple of sessions they gradually discovered their identities and skills as the neural wipe wore off.

"The guy in the unseasonal outfit seems to have wires running from his sleeve to something in his hand..."

In this Squadron UK scenario (see Project Daedalus postings) the PCs are the only survivors of a terrorist dirty bomb in Trafalgar Square.  The bomb awakens their latent superpowers (the genetic legacy of their grandparents) and during their recuperation in a secret government facility they get to know one another and explore their new found powers.

"You notice that the ship's motley crew are carrying short lengths of chain with manacles at each end.  Something tells you that you should start running..."

I started one of my The Lands of Dual fantasy campaigns by collecting together each of the players from their respective homelands with a slave pirate ship.  It's amazing how quickly a party bond with each other when they're chained together rowing for 18 hours a day!!

"You best be getting up to the Castle before the Siege starts..."

In this campaign opener the PCs were press ganged into becoming siege defenders by the Baron of a coastal town.  The PCs were unaware that the Baron was being controlled by the forces of darkness and that the King's forces, massing on the hills outside of town, were being led by a particularly devout Warrior Priest with strict instructions to erase the castle and it's inhabitants from history.
Posted by Tony Bro001 at 11:12 1 comment:

Something I've been meaning to put together for a while and with the help of Sketchup and the Unfold plugin (see my previous post for details) here it is...

Every party needs a cart to get from Town A to Village B and when you've slain the Dragon you need something to haul away it's horde.  For DM's sometimes it's just nice to make the PCs have a good old punch-up around a few wagons.

Normal rules apply; cut along solid lines, score along dashed lines, put tab A into slot A etc.
I used chopped down cocktail sticks to secure the optional roof.

After scanning the interweb for Nazi UFO pics I stumbled across some teaser posters for IRON SKY currently slated for a 2011 release.

The basic premise is that in 1945 the Nazis landed on the moon and set up a secret base where they have hiden out.  Cut to 2018 when the Nazi's try to invade Earth in their huge flying saucers and impose a Fourth Reich.  I hope the film turns out as good as some of these images:

Once the PCs have managed to locate the Nazi research facility they mount an infiltration attempt.  Inside they discover a large hanger equipped with two UFO's, an airstrip, factory complex, drawing office, barracks and a prison.  Inside the prison are the remaining members of "D Platoon".

The PCs must gather as much evidence of the Nazi UFO Research and return to their own time.  The question the PCs must answer is do they attempt to release their own grandparents from the clutches of the evil Nazis and in doing so change their own futures?... 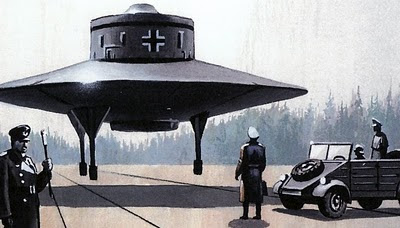 Two days later the PC's are briefed about a new mission.  The body of the German has been examined and it is in fact that of David Williams (code name D4) of the original "D Platoon", disguised as an SS guard.  In his jacket pocket was a scrap of paper with a grid reference scrawled on it  which corresponds to a location in the Bavarian Mountains North of ingolstatt.  During 1944 this was a suspected Nazi research facility.

The Nazi UFO is also being examined, early indications suggest that it is equipped with a primitive antigravity engine which the scientists predict would have had a strange effect on space time.

The PCs embark on a short helicopter ride to a rusting metal structure in the sea off the coast of England.  Inside are obvious scenes of repair and a clean up operation cables are strewn everywhere and the atmosphere is charged with electricity. 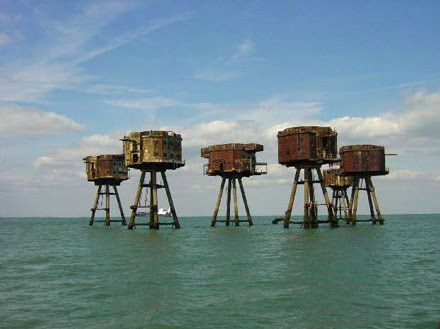 The head scientist is a chap called professor Jennings he explains that this site is a relic from the British attempts to recreate the American Philadelphia Experiment, inadvertently greating some sort of temporal vortex.  The scientists are confident that they can send the PCs back to the right time but they are having difficult focusing the other end of the temporal vortex.

The entry point for the vortex is below the main gantry of the central tower the PCs dropping through into it.  They black-out as soon as  they jump into the vortex, when they come to they are falling through the roof of a barn into a haystack.

The barn is approximately 1 mile from the site of the Nazi research facility in the foothills of the Bavarian mountains.

Project Daedalus: Pt 2 - UFO from the Past

A UFO has been spotted entering UK airspace and has crashed into the sea off the South coast and the PCs are mobilised to investigate.  The craft is submerged in a few feet of water, our heroes are required to don Scuba gear to swim to the craft.

In the murky and silty waters they locate a disc shaped craft carrying WWII markings.  Once inside they discover the body of a German soldier (not a pilot) slumped over the controls of the craft, he is dead, his body is riddled with bullet holes and his fresh blood covers the instruments and controls.  In his jacket pocket is a scrap of paper with a grid reference scrawled on it.  When the PCs report back a salvage operation is launched and the craft recovered for further investigation. 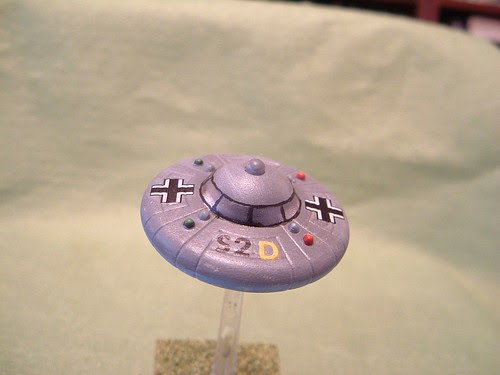 Before the outbreak of WW2 both Axis and Ally powers were involved in a scientific arms race to produce super-soldiers.  The most famous of these being Captain America.  The British attempt, code name "Project Daedalus" produced 5 superheroes members of the elite unit "D Platoon" who were lost in 1944 whilst carrying out a covert operation behind enemy lines.

Unbeknownst to the British Government, their genetic secret lies dormant in the DNA of their illegitimate grandchildren, the PCs.

The PCs powers are awakened when they are irradiated by a dirty bomb set off by a terrorist in an attack on a famous London landmark.  They are the only survivors of the incident and are immediately isolated in a government facility whilst their powers slowly emerge...

Installed the fantastic Unfold plugin for Google Sketchup the other day which makes the job of unfolding your sketchup designs into flat planes ready for papercrafting.  Here's a skyscraper I made to demonstrate the end result (it took no more than 30 minutes from start to finish). 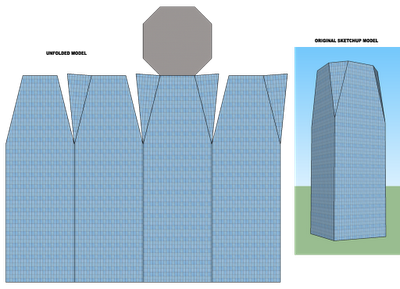 Those of you who have met me in meatspace, I'm a tight-fisted Northerner, and love to make my mini's and scenery rather than buy them.  I'm always on the look out for nice papercraft models to jazz up my Tapletop or RPG games.

Here are some lovely papercrafts from a very talented designer at www.topsolitario.com, of particular note are:

Hexographer is a fantastic free application which helps those of us who are cartographically challenged create our own hex maps.  It's cross platform and runs in the browser, there's also an installable Pro version which adds more map styles and symbols.  Good enough for two Honourable Mentions at the 2010 Ennie Awards.
Posted by Tony Bro001 at 12:11 No comments:

The PCs are sent to a location by their corporation on the pretext of a mission when they intercept an SOS message from an unknown source.  Locating the source of the SOS the PCs discover that it has been sent by a group of ex-corporate troubleshooters who famously bought out their respective corporations contracts. These NPCs are the rolemodels the PCs look up to in their respective fields. The NPCs tell them that their former corporations want them dead... or worse.

The quandry for the PC's is do they join forces with these dissidents and face the wrath of the corporation or do they turn them in?

The scenario is in fact a corporate purity test and the PC's will be "retrained" if they support the refugees rather than alerting the corporation to their whereabouts.

Anything with a heavy corporate setting: CYBERPUNK / JUSTIFIERS RPG / PARANOIA
Posted by Tony Bro001 at 11:48 No comments:

60 years ago an eccentric Billionaire tired of the dog eat dog existence of Mega City 1 started a "simple living" commune known only as The Valley. The residents of The Valley think that they are on a colony spacecraft to a distant planet. They have been living in isolation from other citizens of Mega City 1 for their entire lives. All is well until one of their number finds out the truth and commits suicide by throwing himself out of an airlock.
Phillipe Stark Towers is a 2000m tall luxy block the top 900m or so which are the property of the walker foundation. Entering at any of the pedways or blockparks below 1150m, the PCs will find that the elevators do not have buttons for the remaining penthouse levels. They will need to hotwire an elevator, Barney will be too busy to override an elevator (The control panel is voice activated and will not allow any unauthorised access to or from the upper levels.

The upper levels house The Valley Forge commune, the brainchild of eccentric multi-trillionaire Findus Walker. A commune in which the inhabitants have no knowledge of the existence of Mega City 1, it is an elaborate 60 year psychological experiment to test the theory that the psychological stress of inhabiting a Mega City is the cause of the anti-social behaviour demonstrated by it's residents.

The experiment has been the life work of Findus Smith-Walker who has undergone many bodyswap's in order to witness the result of the experiment at first hand he is currently residing in the body of a 12 year old girl. The residents of the commune live under the pretense that their accommodation is in fact a space colony seed ship destined for a remote corner of the galaxy on a one hundred year long voyage. Many of the original inhabitants who were specially selected for the voyage have since died and their descendants currently inhabit the "space craft".

Oh and just in case you thought the judges were getting off lightly Smith-Walker uses a private army of War-droids (dressed in Judge uniforms) which the residents know only as "space pirates" to keep them under control and at a stable population density.

Originally written for JUDGE DREDD RPG, but would work in any city based sci-fi setting with heavy corporate overtones such as CYBERPUNK / JUSTIFIERS / PARANOIA / SLA INDUSTRIES with some minor tweaks.
Posted by Tony Bro001 at 11:46 No comments: