Movie Modern Day Survivors - I think I fell in love

Cruising the usual suspect 3D model websites I found this collection of modern day survivors and fell in love.

What an amazing addition to your modern day game.  A couple of lowriding survivors who just seem to have the ability to bounce through life. 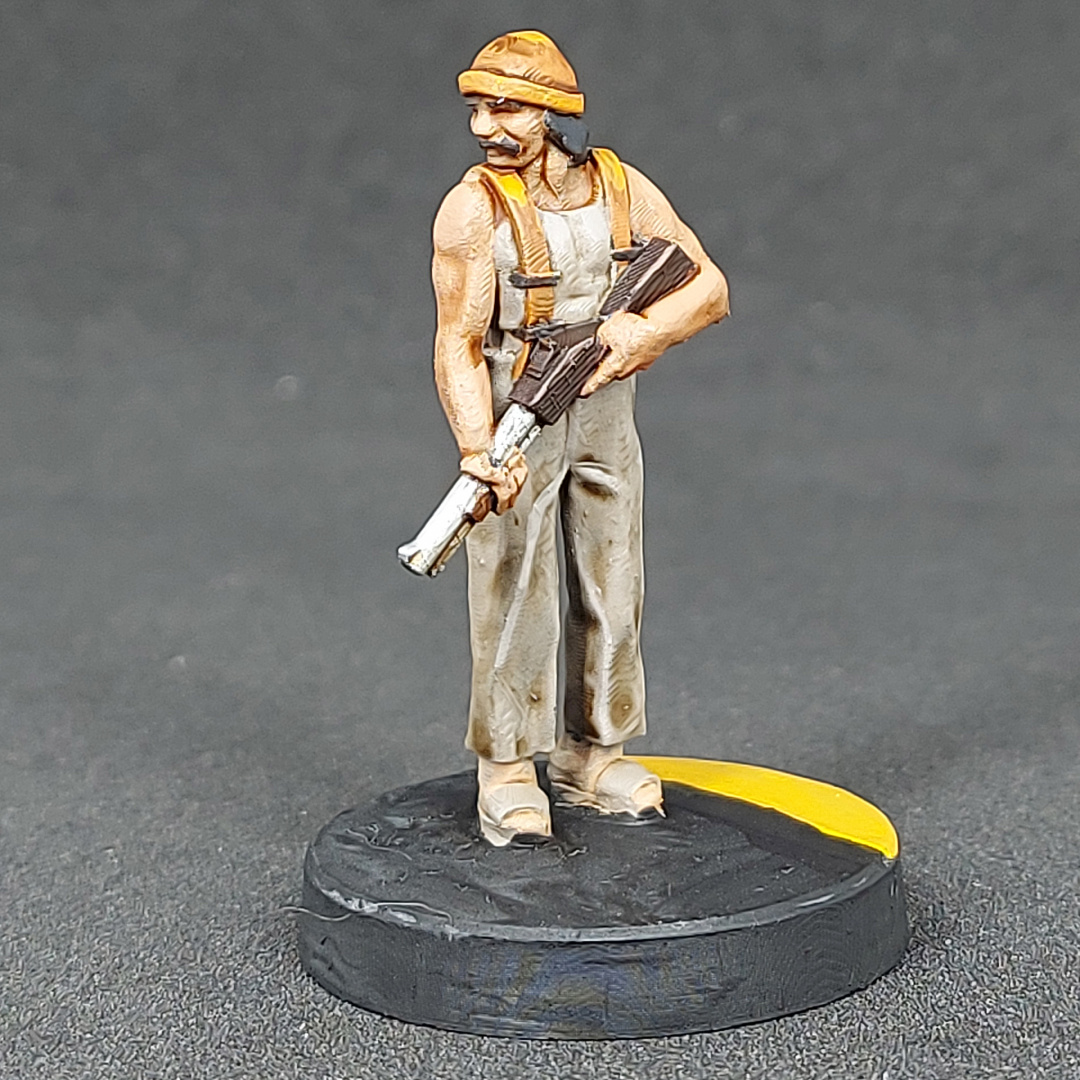 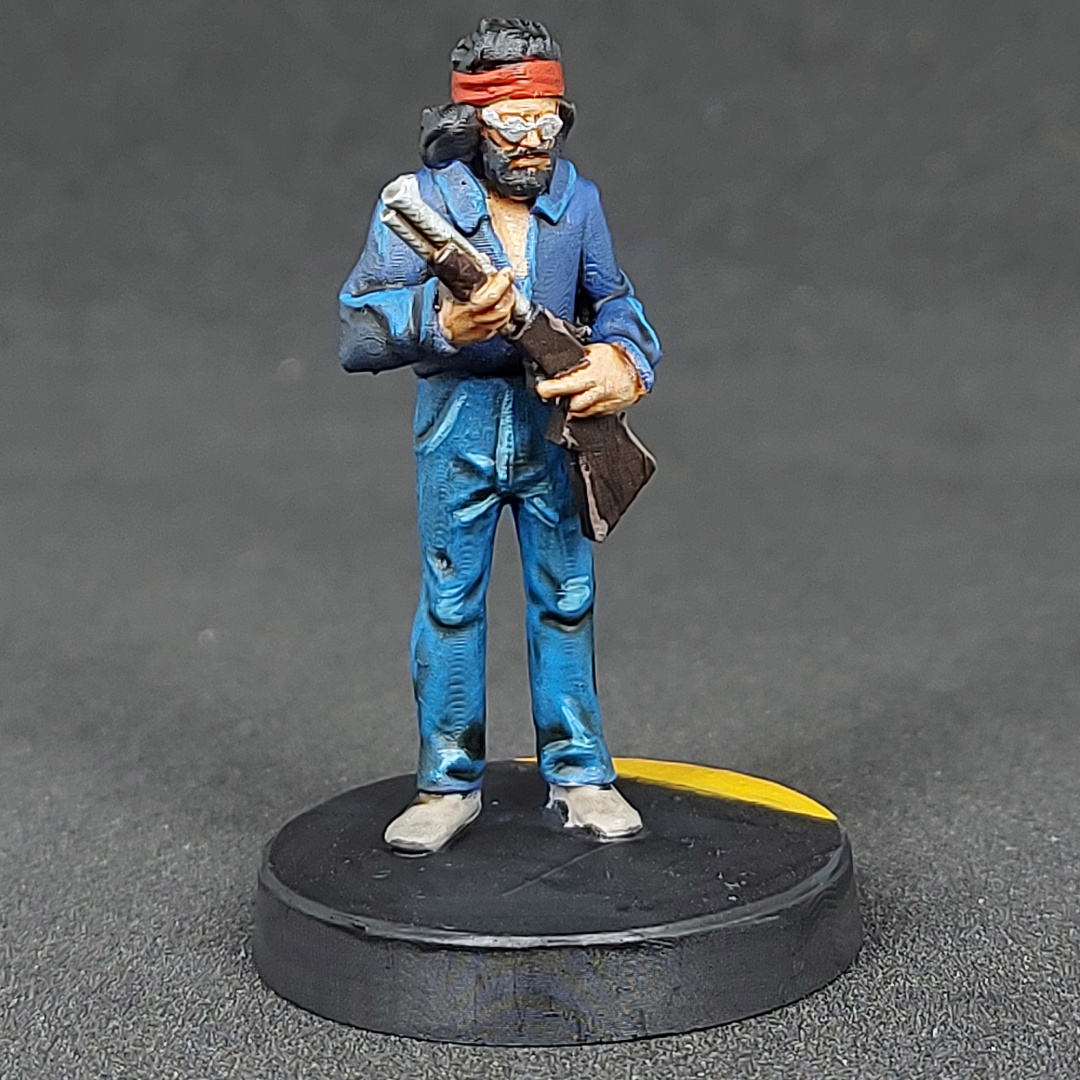 You don't just 3D print Chuck, he prints you! 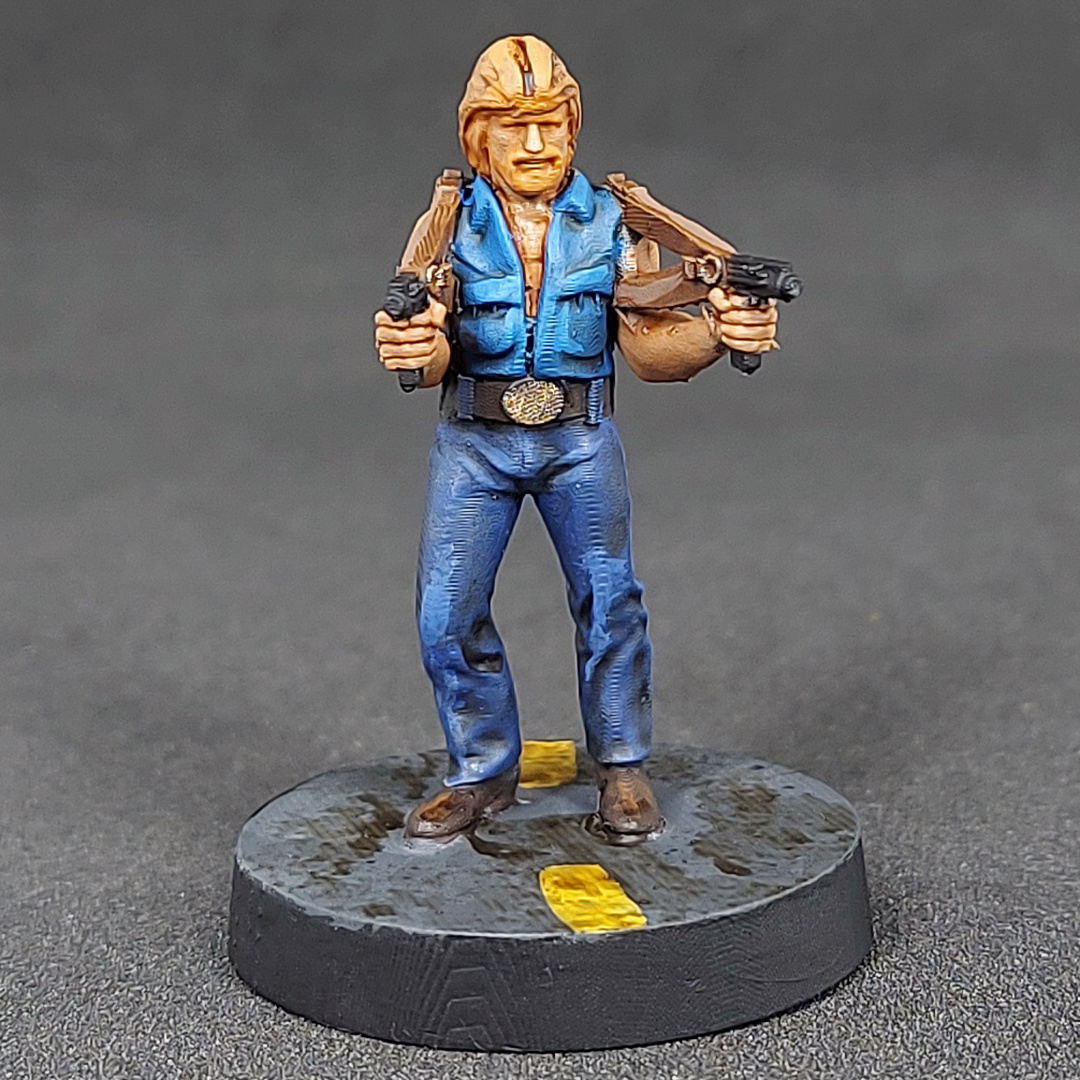 If you are fighting zombies then having this cowboy fighting beside you is definitely going to increase your chances of survival. 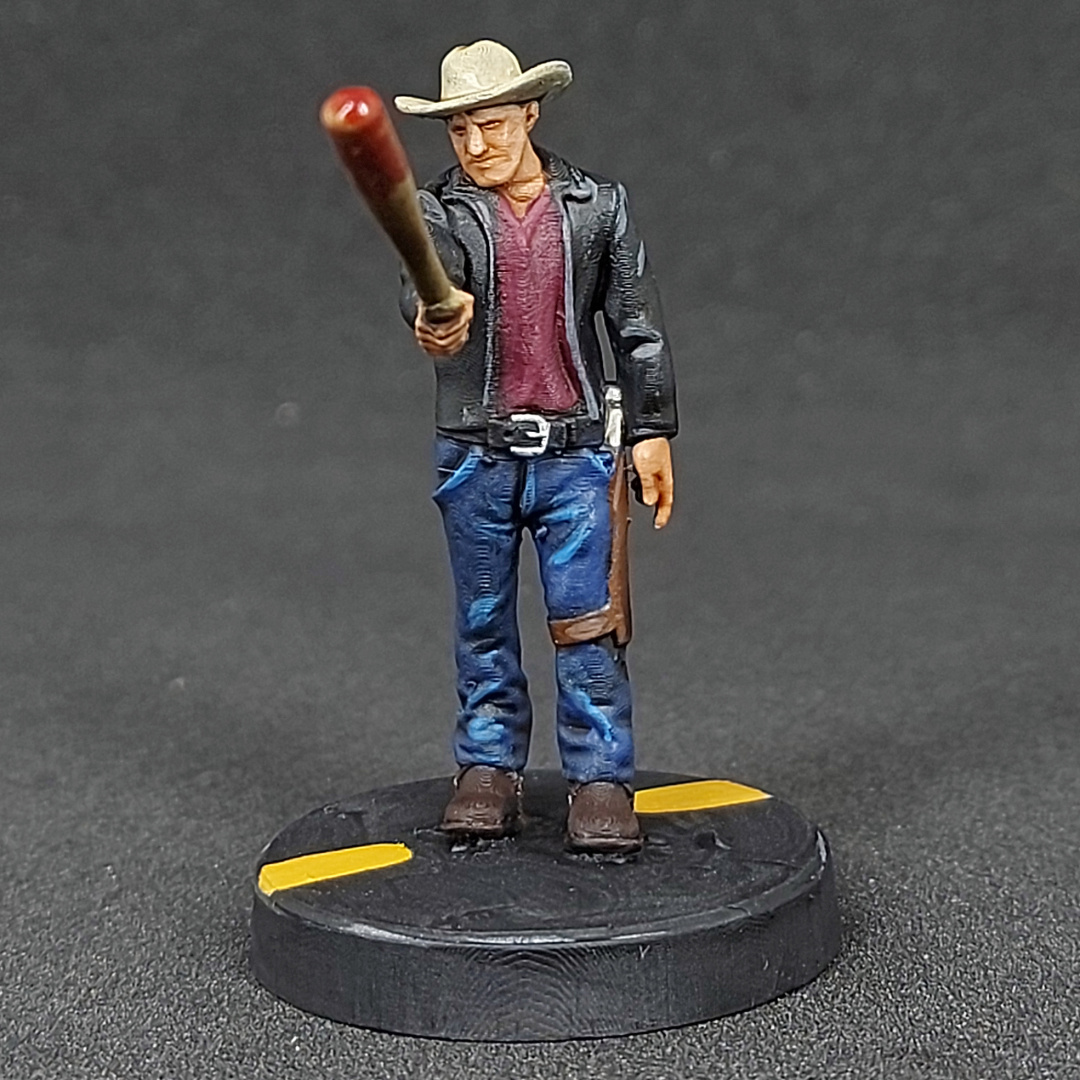 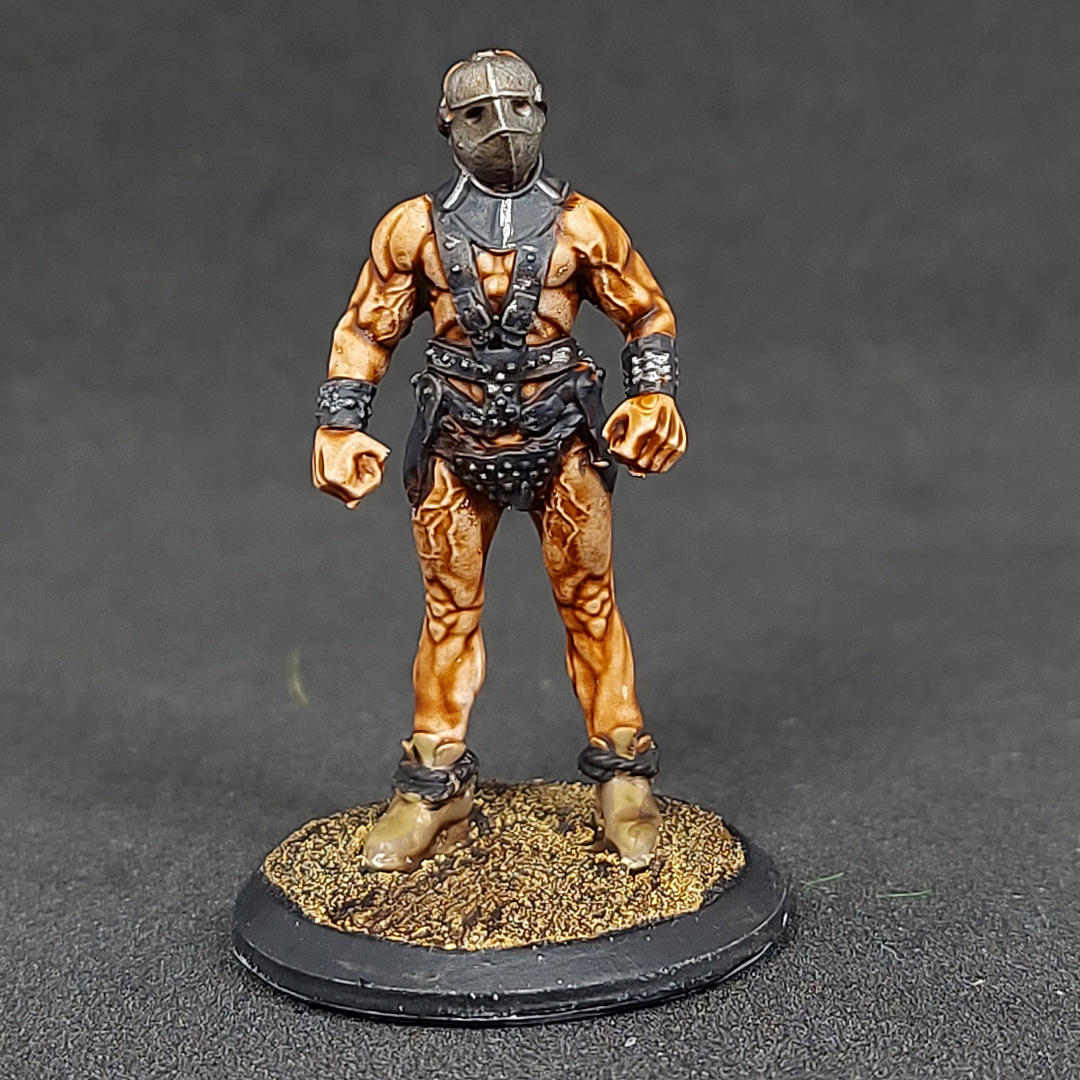 This week, I are mostly been printing...  Stuff for Friends

My current DM Mark is a bit of a metalhead and in honour of his awesome DMing I printed him this equally awesome spell effect for the famous D&D spell Bigby's Hand.  I hope I get to see it in play in the not too distant future. 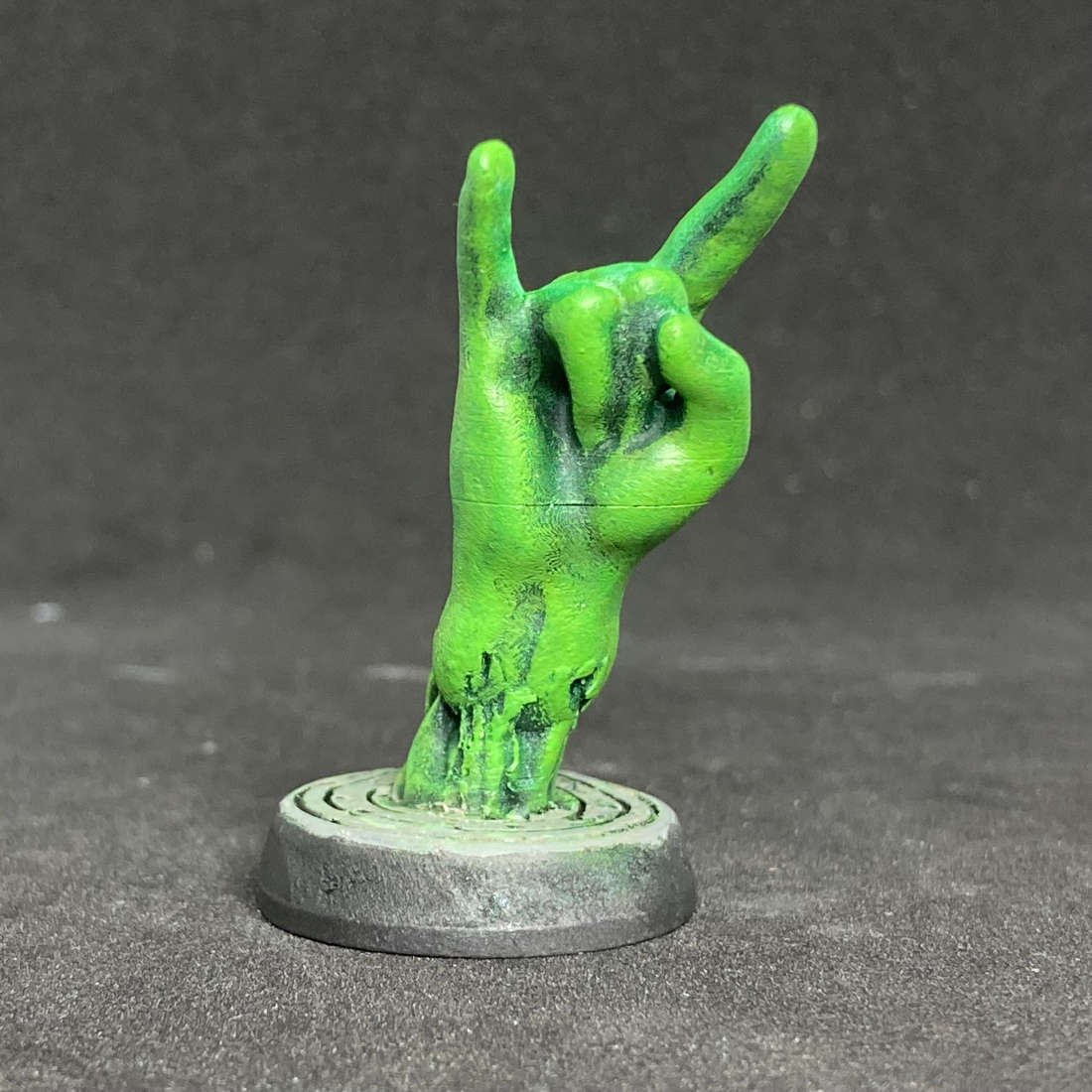 Printing a Lithophane has been high on my agenda for some time and as I was due to meet my 3 old work pals from the Ministry of Defence what better way to celebrate our reunion after Pandemic. 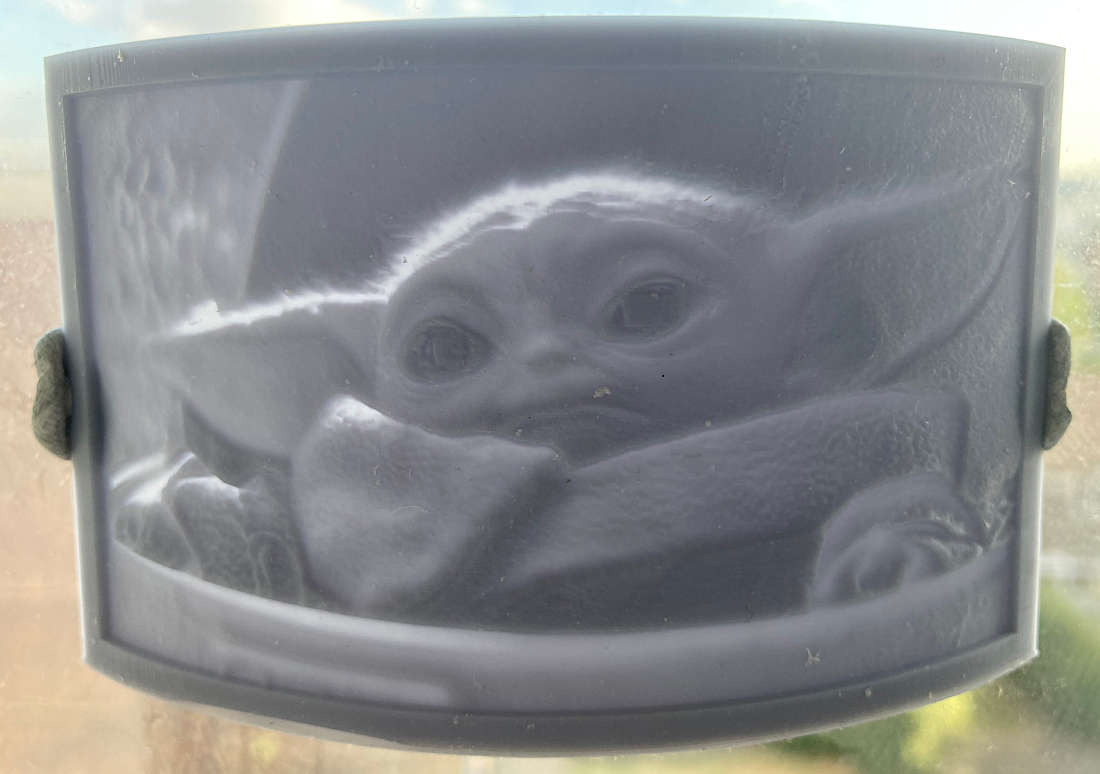 This has been my biggest resin print to date and I really wanted to push the printer to see what it could do.  I am blown away by the mid bending properties of Lithophanes and how, on a budget resin printer, I can make photorealistic 3D art.

Fellow Dragons Keep member Kat told me that her DM had recently gifted her a Displacer Kitten as a moving-in gift so I quickly sourced this super cute mini and an equally awesome displacer beast to represent the kitten when fully grown. 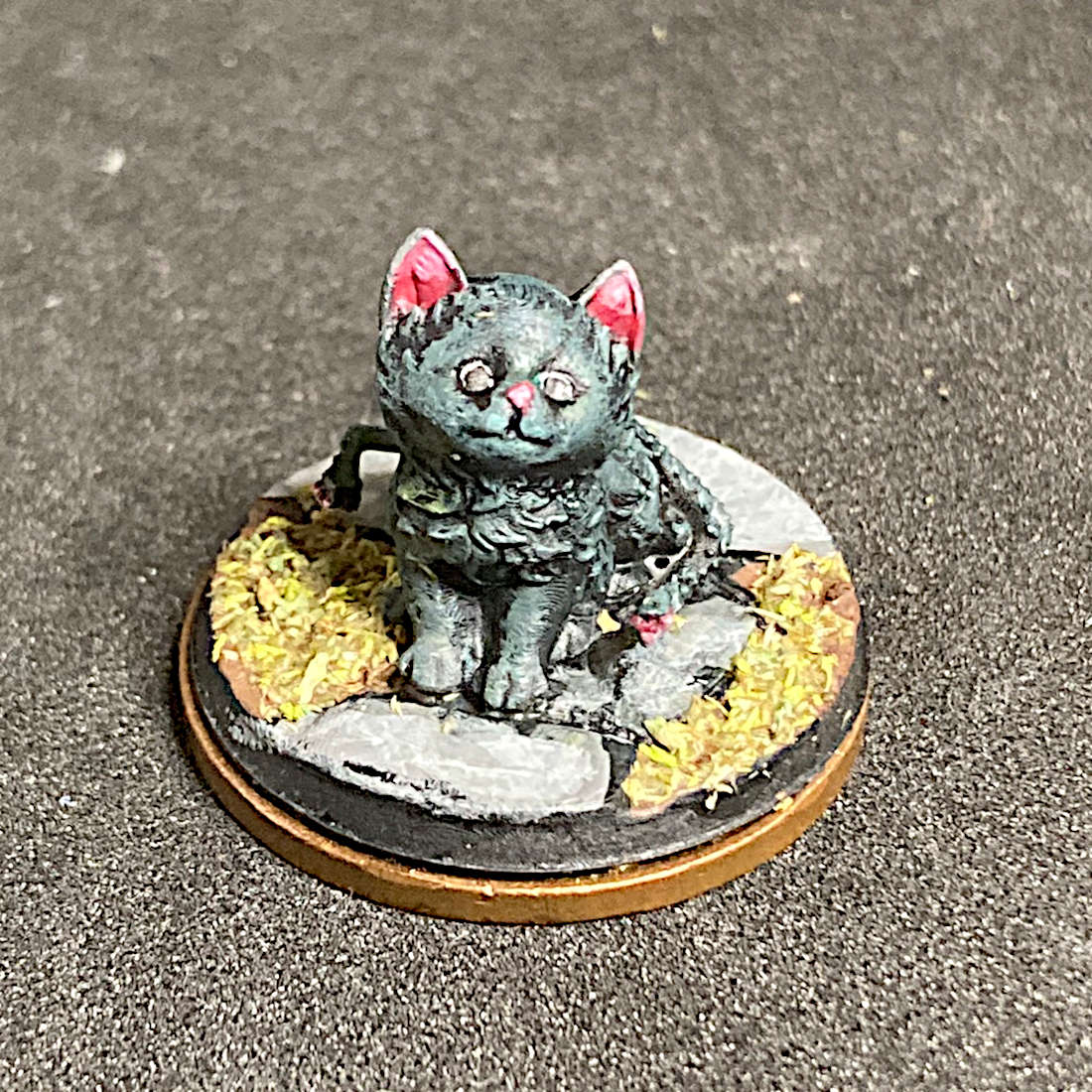 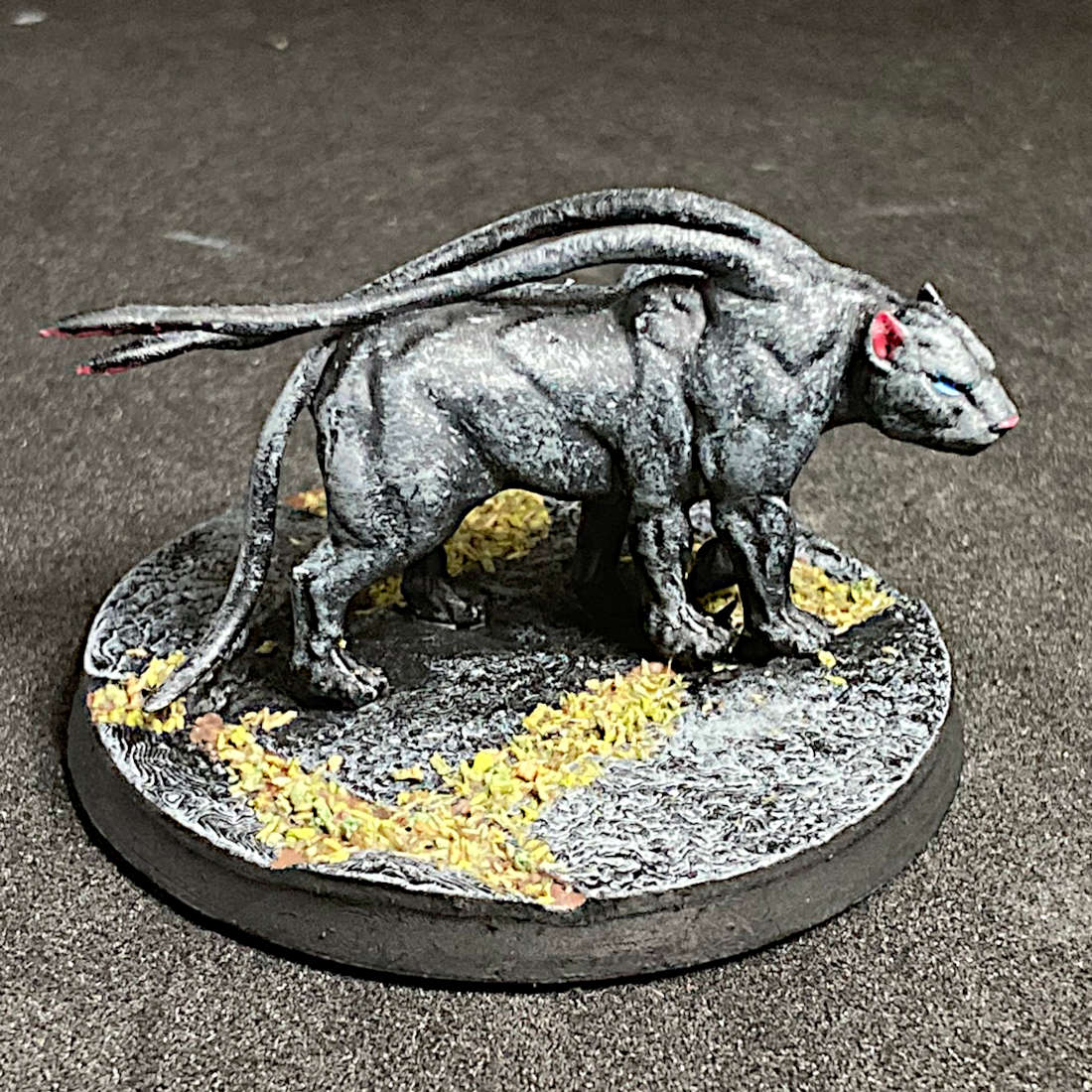 Of course no birthday gift can come without a presentation gift box and my old 3D Printer sacrificed some of it's foam packaging for a custom box. 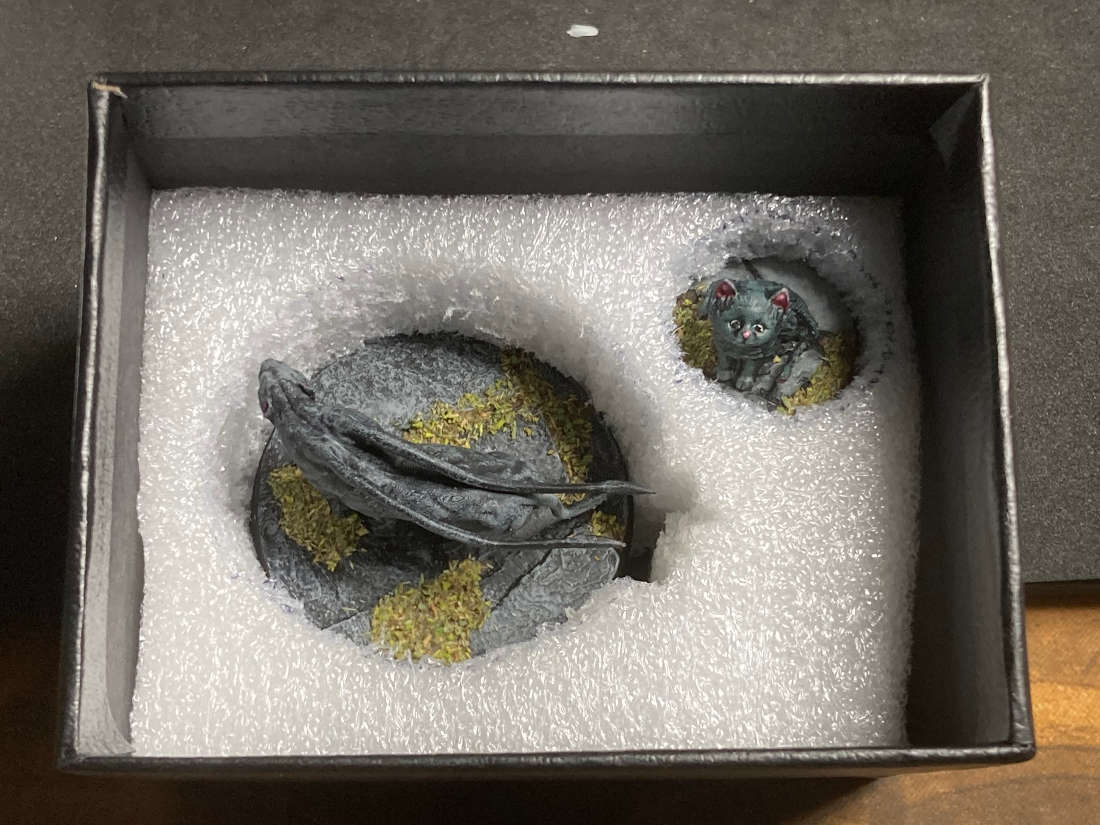 This week, I are mostly been enjoying printing some characters I found on the interweb.

People of a certain age will instantly recognise this little fellow.  He looks harmless enough but back in the 80s he kidnapped a bunch of American kids and put them through all manner of trials and fights against dragons and monsters.  Today's generation would have none of his nonsense I am sure. 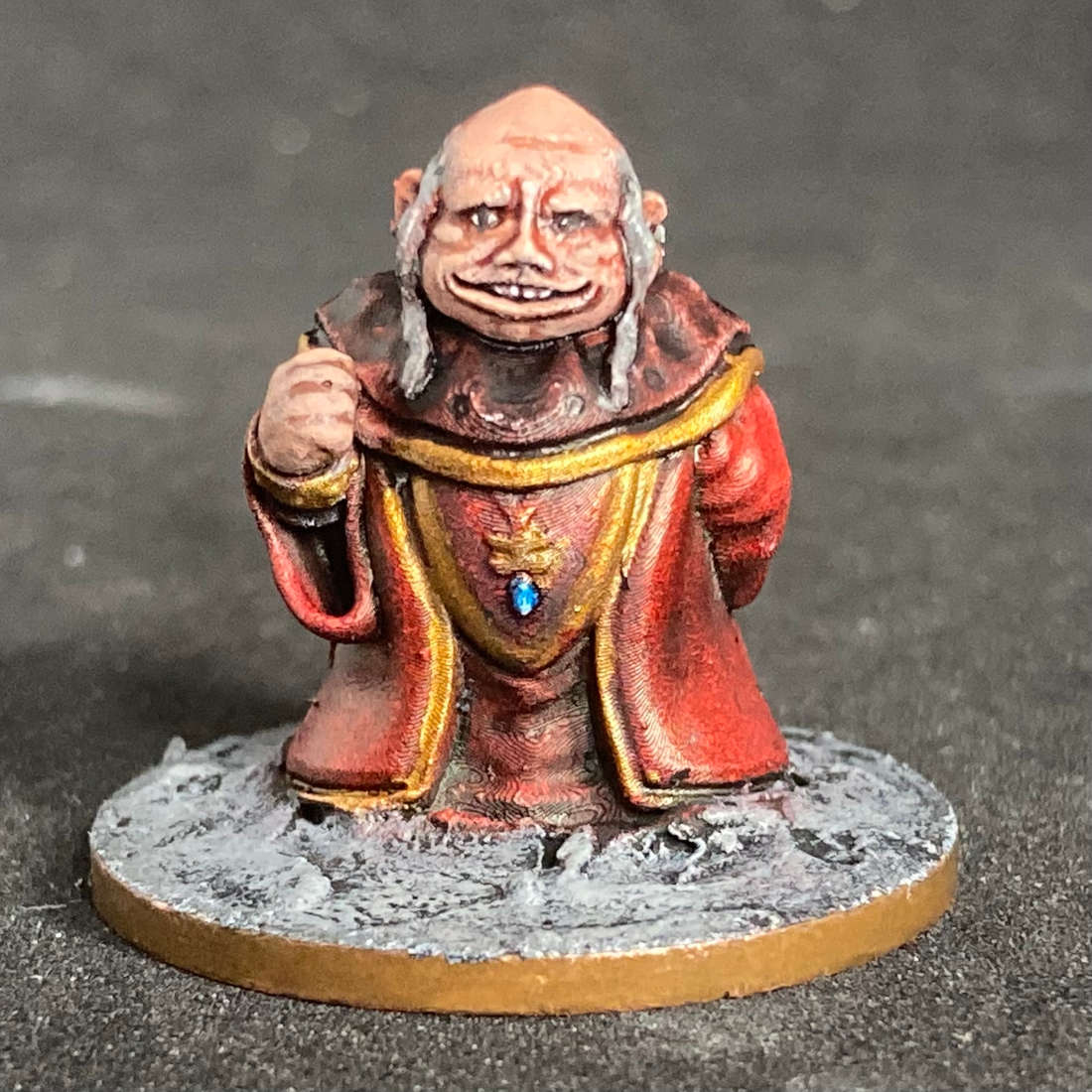 If Hollywood is listening, someone please make a live action remake of the Dungeons and Dragons cartoon.  It will be a guaranteed hit.

There  are a lot of Futurama models out there (I do want to print a cosplay brain slug and a Planet Express) but having a Bender miniature means I can keep those anoying meat bags at bay.  I needed to scale this one down and poor Benders antenna was just too fragile at that scale. 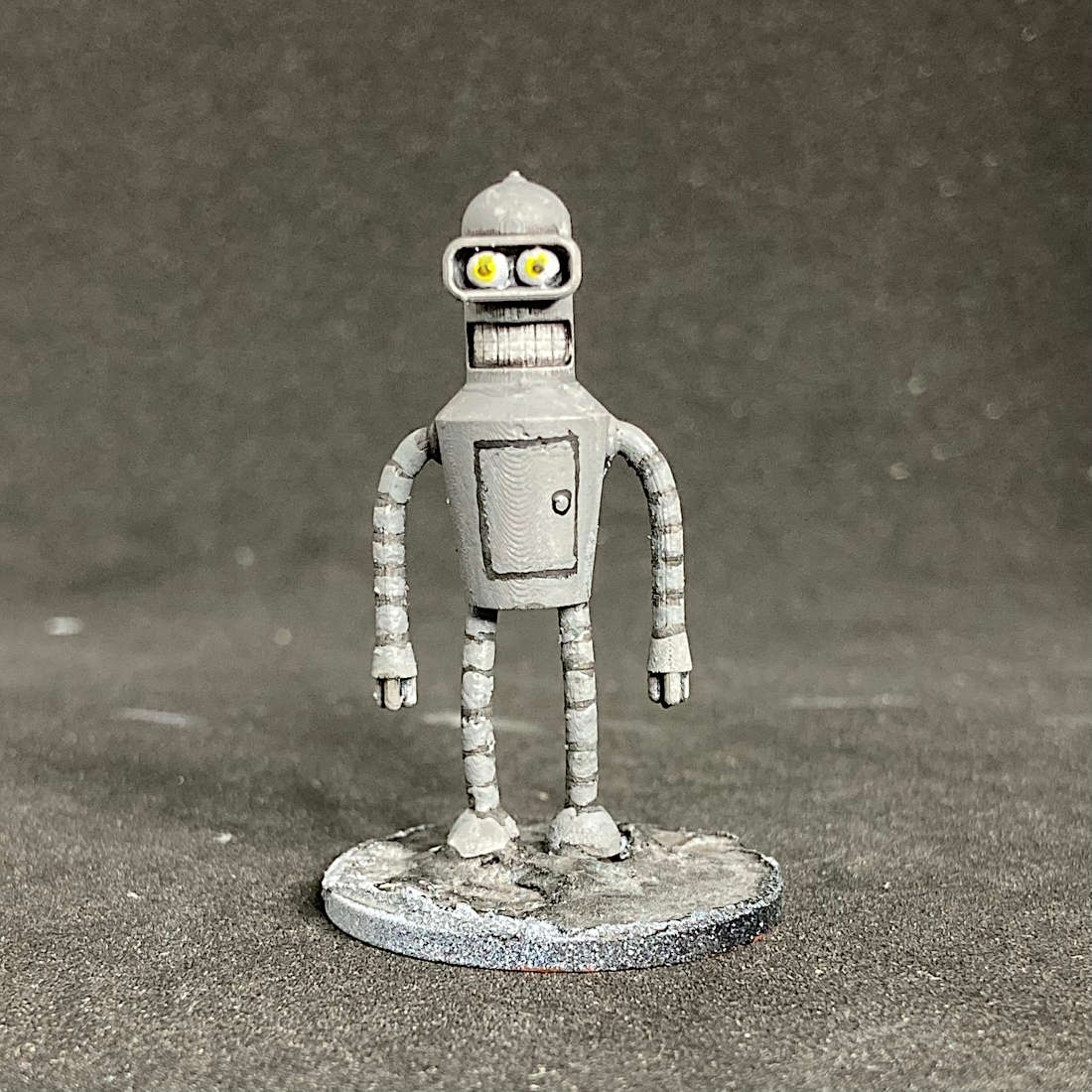 In a previous episode I printed the mad scientist Dr. Frankenstein and his able assistant Igor.  It would be churlish of me not to include his two most famous creations, the monster and Frankenstein's Bride.

Both these sculpts are by GloomyKid on Thingiverse who seems to push all my buttons when it comes to the models he chooses to sculpt.  Awesome work dude. 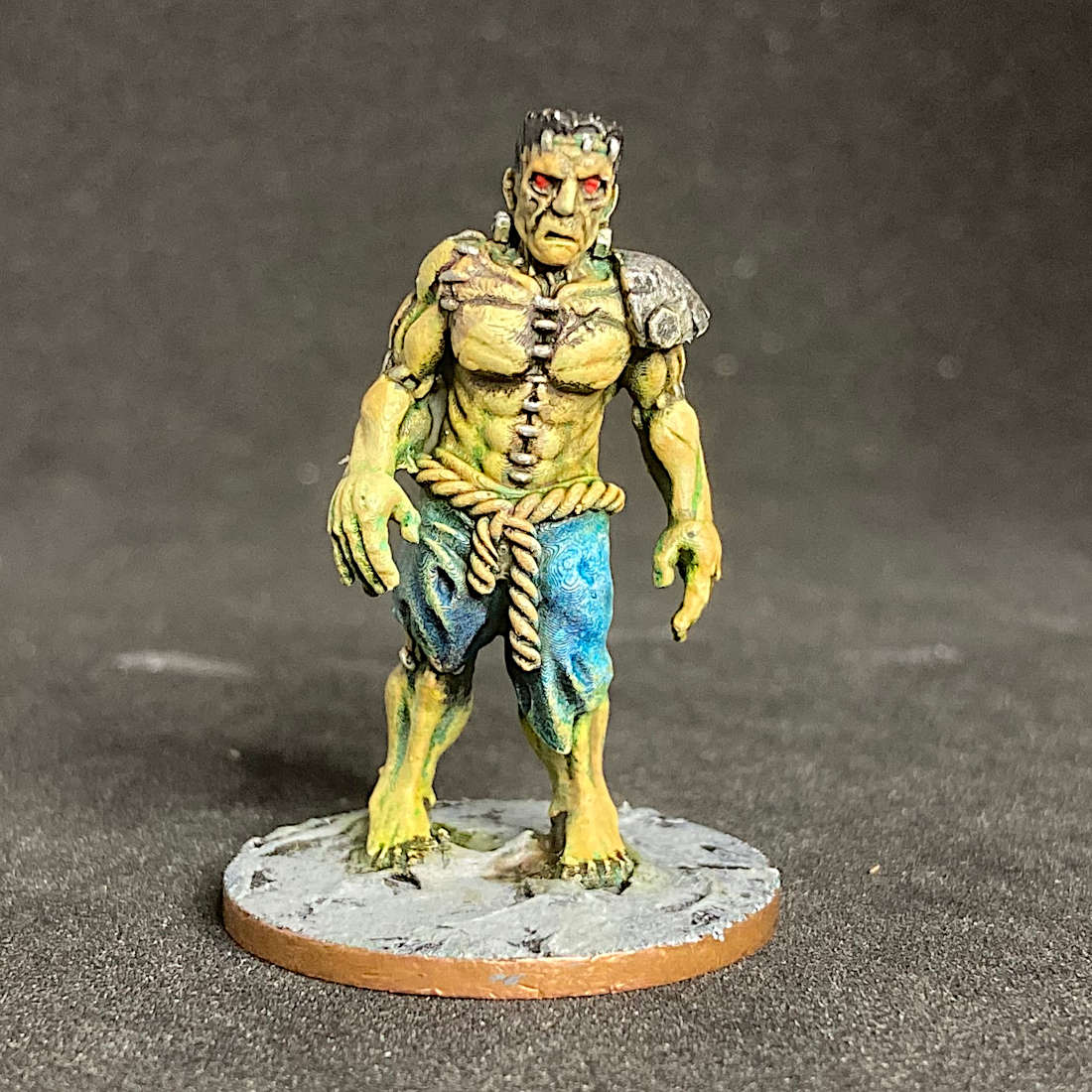 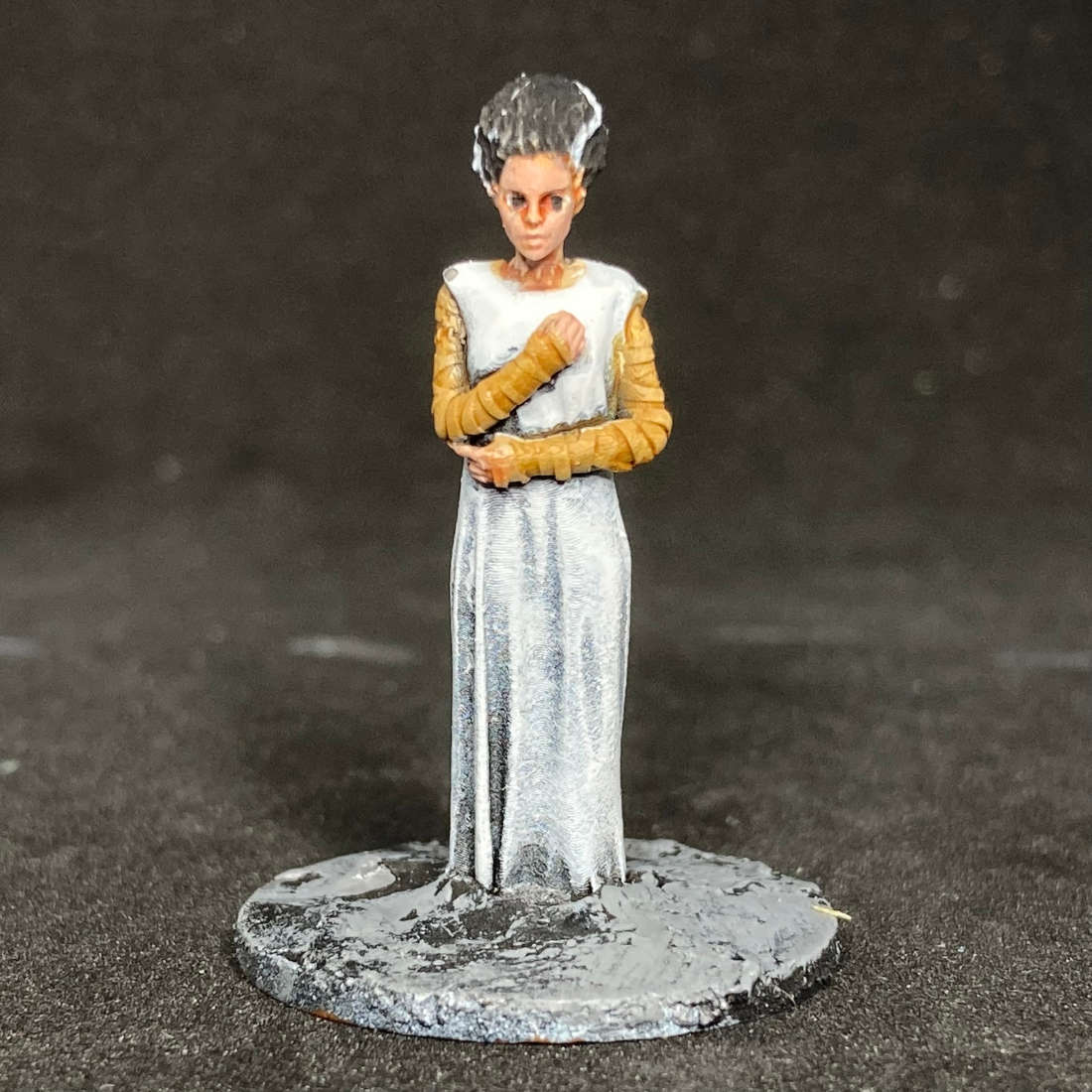 The House of R'yleh: Part 4 - The Art of Negotiation

The House of R'yleh is a Call of Cthulhu adventure set in London in late November 1923.  The Games Master is Mark and play takes place at Dragons Keep Roleplay Club in South East London every Friday night.

The beret wearing creature ordered his minions to surround the friends but, despite their weapons, it was clear that they were going to have to talk their way out of the situation.  The cavern was dimly lit but four fully finished paintings could be seen leaning up against the far wall.  Chester addressed the beret wearing creature as Peters but the creature said this was not his name.  Yoshi put two and two together and realised that this was the macabre artist Thewlis, who had been drummed out of the Chelsea Art club for creating obscene art. 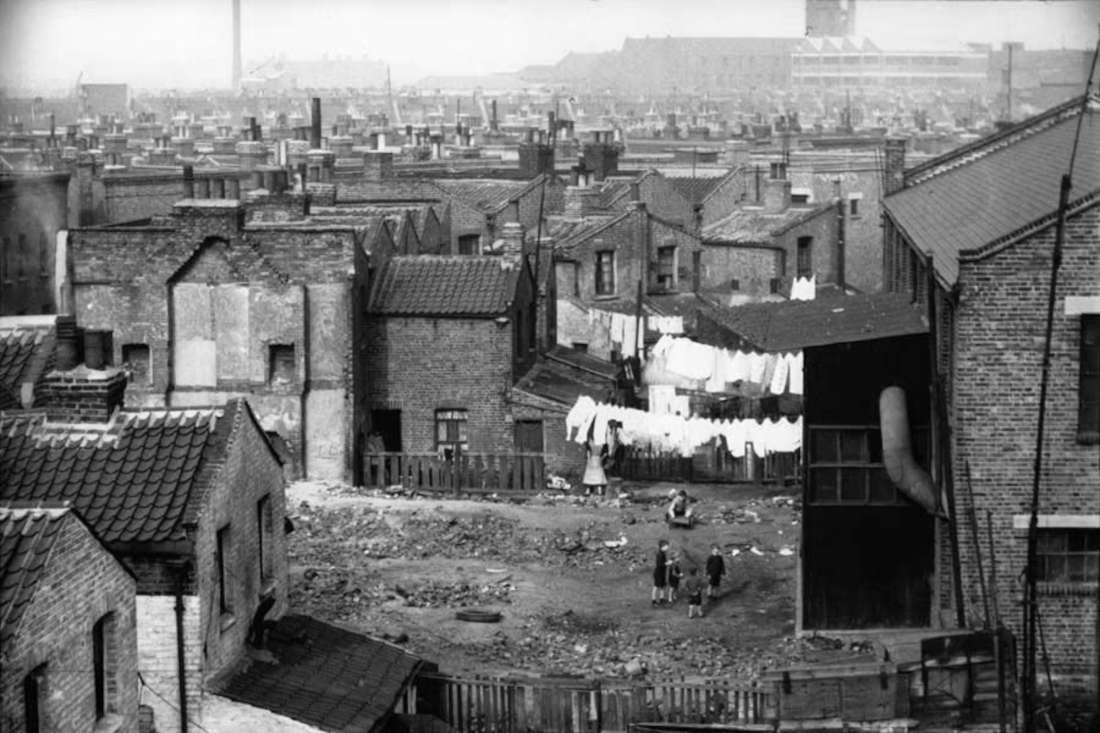 In broken English Yoshi claimed that they had come from the Chesea Art Club who had had a change in leadership.  The new regime wanted to right a previous wrong and purchase all of the art on display in order to hold a grand exhibition, one of the conditions was the return of Davies and his two students.
Thewlis was intrigued and pulled his forces back enabling Yoshi and Ginger to cross the cavern and get a better look at the four paintings.
The first was of a grand country house with a rotting corpse in the foreground.  The second was of a strange ruin in the desert.  The third of the interior of a building its walls covered with intricate hieroglyphs. The final painting was of a fantastical island structure jutting out of a stormy sea.  A tiny boat battled the gigantic waves heading towards this island.  In the centre of the painting a great door imprisoned something powerful which wanted to be released.  Observing this final painting Yoshi and Ginger had a visceral out of body experience.  It was as if they were on board the ship heading towards the island.  Looking down at her feet Ginger noticed that they were wet with seawater.
After some discussion Thewlis agreed to the terms on the condition that the friends retrieve an important artifact for him.  He passed them a grubby manuscript whihc detailed the history of something called The Shining Trapezohedron, an artifact which would enable Thewlis to truly convey the majesty of his art to canvas.  Only then would he release his "students".
The foursome agreed and, led by one of Thewlis ghoulish servants, they returned to the surface and cold snowy Lambeth.

The friends reconvened at Victoria Police Station and Ryan went to inform Det. Sgt. Farrell that they had located the missing artists.  Farrell assembled a five man squad of his finest officers.  This came as a dissapointment to the friends who urged him to bolster his ranks.  Another five men were found and they piled into a black mariah and followed the directions to the tenament in Lambeth. 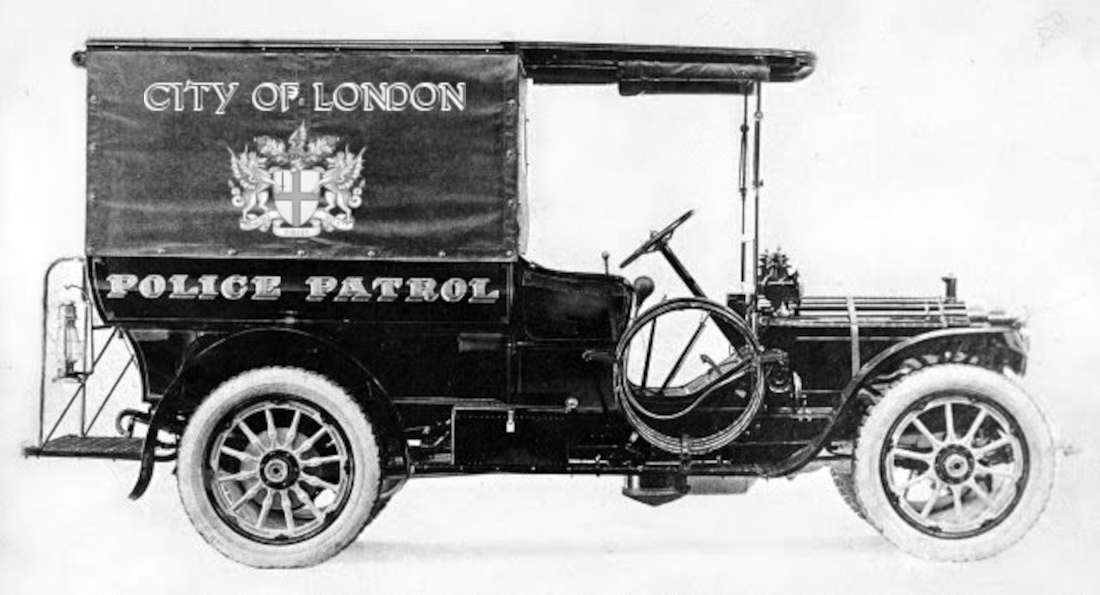 Ambushed in the Sewers

When they arrived in the basement they expected to find one of Thewlis's creatures waiting for them but the room was empty.  They decided that Farell would accompany them in a lead group whilst Sgt Forester and the remaining officers would be following behind as backup.  They proceeded to traverse the sewers until they were about 100 yards from the entrance to the excavated side tunnel when they heard gunshots from behind.  They had been ambushed.
a half dozen or so of the creatures came at them from both directions cutting them off from the officers behind and a pitch battle ensued.  They overcame their assailants with great difficulty and all were wounded in some way except for Chester.  They ran back through the tunnels to the ladder stopping only briefly to recover the collar numbers of the slain officers they found along the way.
They only found four of them...
Posted by Tony Bro001 at 11:21 No comments:

You wait months and two Reapers come along in quick succession!

This is a great mini because it is so purposeful.  Every fantasy game you've ever played has this type of veteran fighter as an NPC.  They're usually the one giving the orders and putting your neck on the line! 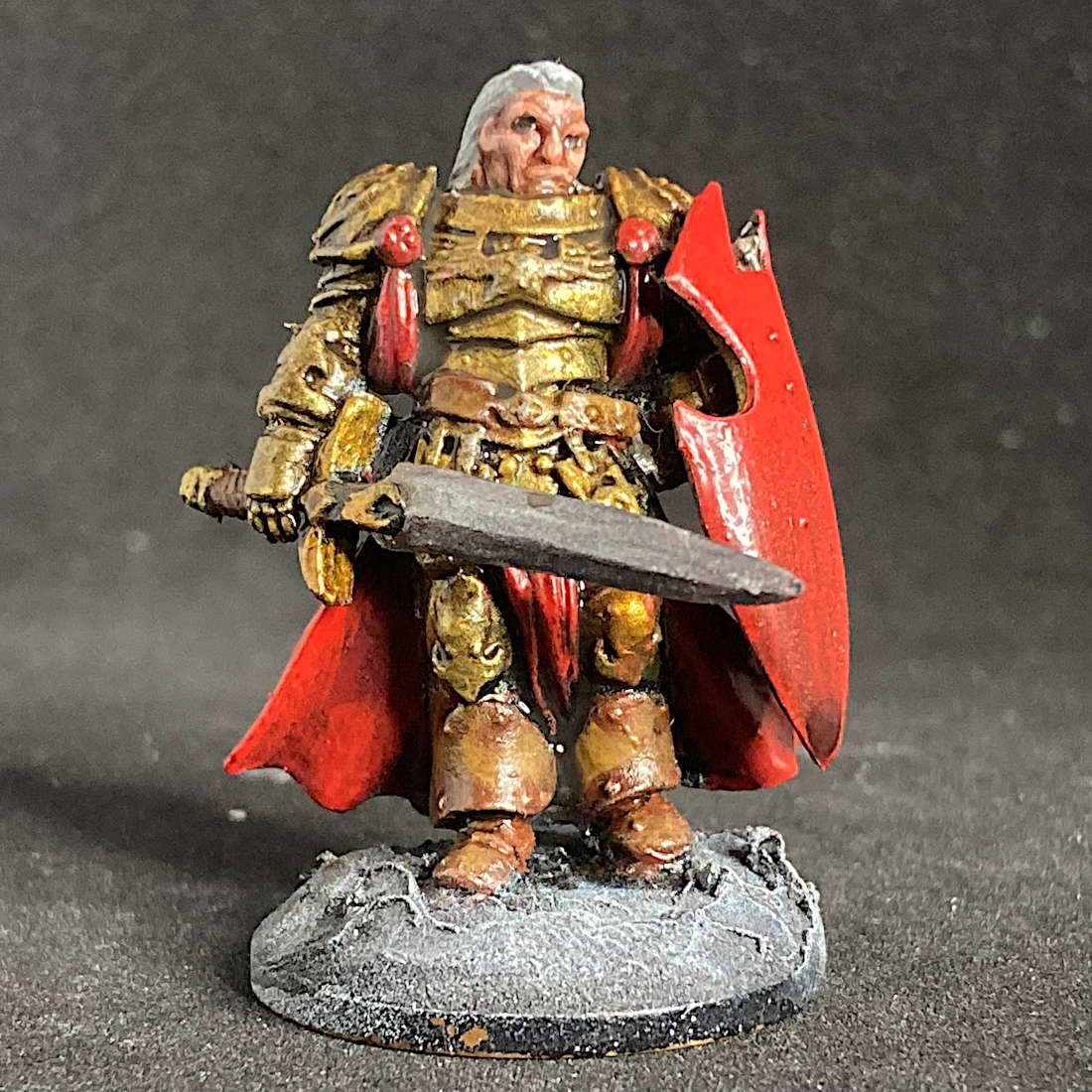