I've blogged before about my love of the Starblazer Adventures RPG system which was inspired by the small format single story comic books published by DC Thomson Comics in the 1980s.

Starblazer was never as popular as it's war story cousins Commando and Battle and I know as a kid they were hard to come by in 1980s Bradford.  In fact I seem to remember there being one news kiosk in the bus depot that used to carry them in one of those wire racks for birthday cards.  Isn't it strange what you remember.

DC Thomson had started publishing collections of these long out of print gems, but after 2 volumes the faith seems to have departed.  Not to worry, I have a small collection of these thrill packed little comicbooks and they are still readily available on eBay at very reasonable prices. 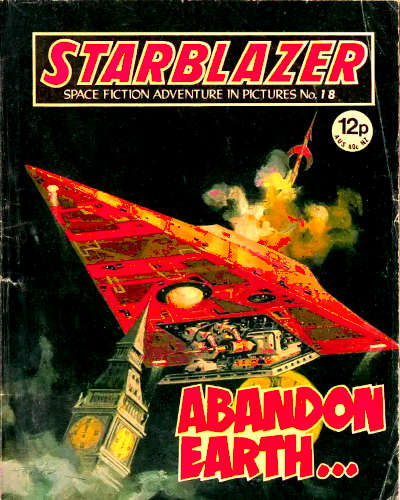 #18 Abandon Earth - Space Wars did not exist.  By a series of treaties each galaxy remained alone and untouched.  Earth built a survey shi, Zephyrus, to prospect in deep space.  It was this ship that led to the call - "Abandon Earth".

In this tale of human humbris, the arrival of the Zephyrus in Vemlin space is interpreted as an invasion and gives rise to an intergalactic war with Earth.  The inexplicably named Carstairs is the robotic hero in this odd tale of politics and miltary strategy.

The cover art is reminiscent of the spaceship paintings of Chriss Foss, Peter Elson and Jim Burns which are gloriously immortalised in the Terran Trade Authority Books published by The Hamlyn Group in the late 70s.  I remember getting one of these coffee table books as a child and they were like nitromethane for the imagination. 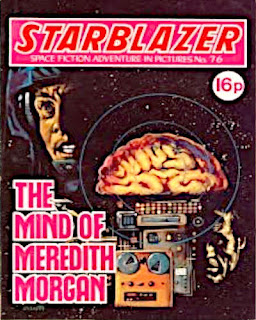 #76 The Mind of Meredith Morgan - Benjamin Starr was a teacher - A man who knew nothing of the mysteries of space travel.  Yet, when a simple accident brought him to the attention of the World Council, he found himself at the controls of a starship, pitting his wits against and alien computer, and warping space itself - and if he failed, Earth was doomed to an eternal Hell.

A rollercoaster of a tale which pretty much sums up a standard Starblazer storyline.  Heavy on the cliffhangers, bouncing from one near catastrophe to another a breakneck speed.  There's no time for an indepth discussion or detailed character motivations, its a swift punch to the jaw and a laser blast from the hip.

The Starblazer Adventures RPG echoes this with it's hilarious random Starblazer Comic Title Generator.  Honestly, I could just spend a couple of hours happily rolling up different scenarios an imagining what might appear on the cover. 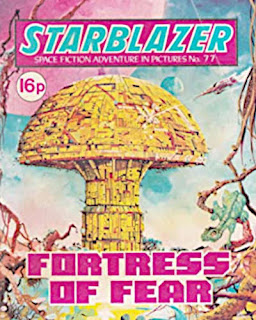 #77 Fortress of Fear - The key to space travel, was the system of wormholes througout the galaxy.  As they were so far away, defence posts had to be constructed.  Operatives from Earth's elite fighting scientist branch, The Fi-Sci's, were put in charge of their construction.  Danger was a part of their lives , but even their brand of courage was put to the test by the... Fortress of Fear.

In this issue we follow the exploits of Hadron Halley (what a zarjaz futuristic name) as he explores the mysterious planet which is home to the even more mysterious Mind Lords.

These cut price Mekon-like maniacal mentalists have subjugated the native population and turned them into puppets dressed like the Oz's Tin man (I kid you not).  They hide in the safety of their mushroom shaped city come spaceship and finalise their plans for Solar galactic domination.

Elements of the artwork remind me of Simon Harrison's Bradley the Sprog but in classic fashion DC Thomson never cited who wrote or inked their comic books. 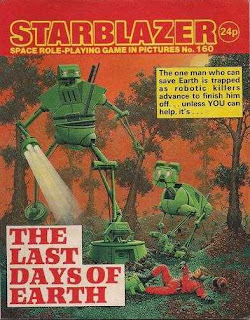 #160 The Last Days of Earth -  It is 2500 AD, and Earth is protected by Earthwarriors - A select band of highly skilled fighters.  A mission starts on Picture 1 and progressively becomes more and more difficult... It is at this point that your help is needed to make vital decisions.  Read on... unless you succeed you will witness... The Last Days of Earth.

A cheeky subtitle change to "Space role-playing game in pictures" announces that DC Thomson have  jumped on the Fighting Fantasy style adventure gamebook in this story of post apocalyptic survival.  You are Space Patrolman Svenson .  I can't remember ever seeing anything as ambitious as this in comic book form although the Ace of Aces Game Books from Flying Buffalo.

Needless to say the adventure is a pretty ripsnorting affair with Svenson bouncing from one death defying panel to another before ending up in court.  I think this deserves a proper playthrough and mapping of the choice tree so I can work out what the hell is going on in this story arc. 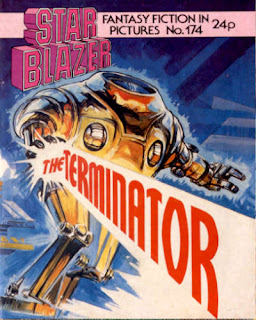 #174 The Terminator - Lawlessness abounded in the pioneer outer worlds of the Earth Federation, and the few over-worked, short lived Marshals attempted to stem the criminal tide.  Assisted by huge, deadly robotic terminators, justice slowly began to return to the colony worlds... Until one of these gigantic, unstoppable machines turned rogue and proceeded to eliminate innocent people.

It's 1986 and clearly James Cameron's lawyers thought it wasn't worth suing DC Thomson over the title of this issue.  This has all the hallmarks of a classic western story where up to no good town officials are lining their pockets with some scheme involving the mine.  Enter Marshall Skarr (God, I love these names) who is sent to Glasis V to investigate.  He gets straight to the bottom of things and stirs up trouble for the local Judge who programs a Terminator to exterminate Skarr before he really finds out what is going on.

The Judge has done a deal with the Ellon, who basically are starfishmen, and not the cuddly Patrick kind these are more like Zygons.  The Terminator gets its second wind and helps rescue Skarr and everyone lives happily ever after.  The robot is a pretty cool design and lives up to its description as an unstoppable relentless agent of justice. 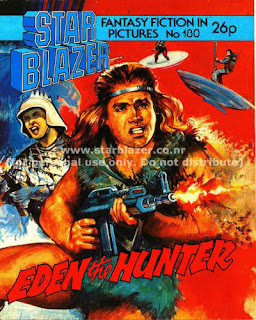 #180 Eden the Hunter - Made an outcast because his mistake had caused the death of fellow villagers, Eden swore vengeance.  The only trouble was - he didn't know what he was fighting.

The depiction of Eden on the front cover is a bit misleading and clearly someone must have copied a picture of Kurt Russell as once you turn the page he looks more like a Native American Indian tribesman.

This is such a weird story and the sort of techno savagery story you used to get in science fiction back in the 80s.  As the story evolves the villains of the piece are introduced, a race of electro vampires that look like a cross between a human and a pteradactyl.  Eden encounters various people along the way all of whom seem to have fallen prey to the electro vampires but Eden is a rugged outdoorsman and not to be trifled with.

The electro vampires reminded me of one of the character Worzel from the excelent Lensman anime movie.  A highly recommended adaptation of the E.E Doc Smith, Hugo Award nominated Lensman books from the 1950s. 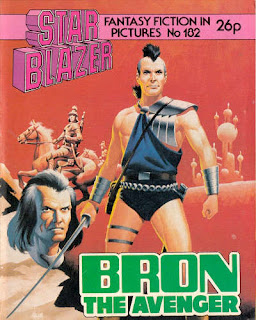 #182 - Bron The Avenger - After the Nuclear Wars devastated Earth, civilisation ceased to exist as we know it.  Murderous bands roamed the country taking what they wanted, but the hand of fate selected Bron to stand against them.  A young man with strength in his limbs, and revenge in his heart.

Well from that description Bron sounds like a lot of fun.  Starblazer didn't just do Sci-fi with spaceships and aliens, there was a healthy smattering of fantasy and crossover post apocalyptic mad max style adventure too.  Bron is one of those sword and sorcery tales set in the ruins of 1980s civilization.

The scent of anachronism is heavy and at one point Bron delves into the subterranean underworld chased by zombies and finds himself on a runaway tube train.  This theme runs throughout, the idea that some technology survives, hoarded by the "sorcerors" and technomancers with the knowledge and skill to keep the machines alive and working for their own benefit or that of their overlords. 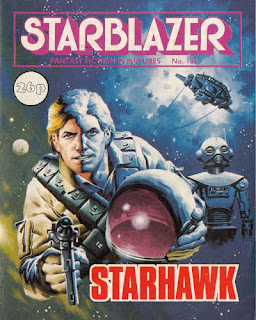 #186 Starhawk - The 3rd Millenium, 2600 AD, and the Galaxy spanning Terran Empire is crumbling in decline.  The savage Krell ravaging its borders and order is replaced with choas.  Barbarism exists everywhere, and amid this lawless bedlam one man stands for law and order - Sol Rynn, known as Starhawk.

This is a return to the square jawed smoke me a kipper type hero who roams the spacelanes like a one man A-Team.  His calling card, quite literally a card you push into a machine to make a call, reads "If your cause is just, but the odds are too great Use Me".  I'm suprised he gets any business at all with approach.

Somone on Wengel IV needs his help, but the first locals he encounters practically ignore him.  Fortunately he finds the terminal used to make the call in an abandoned communications centre.  Enter the Battletoads style mutants who chase Starhawk through the jungle.  Eventually he discovers the secret lab of Hak Galos the owner of Megalos Mining who has hatched a nefarious scheme to mine Trikalak K a banned substance and key ingedient in Quark bombs.  Galos clearly has some sort of plan for those quark bombs, but it is never fully fleshed out.

I found a great resource with some fantastic interviews from some of the original artists and writers who worked for DC Thomson back in the day.  Check it out at downthetubes.net.