It's 2022 and the COVID-19 debacle rages on.  One of the casualties of the Coronavirus pandemic was my old club.  The pandemic was a catalyst for division and greatly reduced attendance as fear and panic spread across the membership, it ceased to function in any meaningful way.

This club had been founded on the principles of democracy, every member having an equal say in how the club was run.  Unfortunately this led to internal politics when most members just wanted to turn up, play games and have fun.  Running that club became a constant battle of personalities, skullduggery and in-fighting.  The pandemic was a cover story for usurpers to spread rumour, lies and deceit in private channels in order to facilitate a popular uprising.

Unfortunately, the patient was considered to be unsaveable and the tough decision to pull the plug had to be made.  This enabled the membership to ultimately make their own decisions about how they wanted to roleplay going forward.  The club was dead, long live the new club.

Running a club is a thankless task and I have played my small part in helping to run numerous roleplaying clubs over the last 30 years.  The problems are diverse but mainly revolve around organising games so that everyone has something to play.  Clubs evolve organically, expanding and retreating as the winds of fortune blow and the real-life priorities of members compete for their valuable time and energy.

It takes a certain amount of sacrifice to run a club and a management team that can commit to doing what the club needs rather than what they need as a player or a games master for the good of the group.

I have learned a hard lesson in that a club is not a democracy.  Democracy empowers people with a voice and a platform upon which to speak their opinions.  However, without effective rules, governance and constitutional principles it can easily turn to Anarchy.  For a club to thrive it has to have strong leadership and direction, it has to have doers and not talkers, because ideas are ten a penny and talk is cheap.  A thriving club is one where everyone is engaged and they want to come to enjoy themselve and not to talk about politics or how they could run things better if only they had a chance.

January of 2021 saw the birth of a new club, Dragons Keep Roleplay Club, founded by a small group of 6 people with the core principle of "being excellent to each other" and fostering engagement.    The management team run things for the benefit of members and the members only duty is to make sure that they and their fellow players are engaged and enjoying themselves.

I am happy to say that we have exploded in size and the membership has swelled to  around 25 members and every one of them turning up every Friday night.  We have gone from an online only existence, playing our first games during lockdown via Zoom and Roll20 to being once again an IRL club with 5 different games on offer.
We hosted our first Games Day and Christmas Party which was very well attended by members and a huge amount of games were played, turkey consumed and sprouts scowled at. 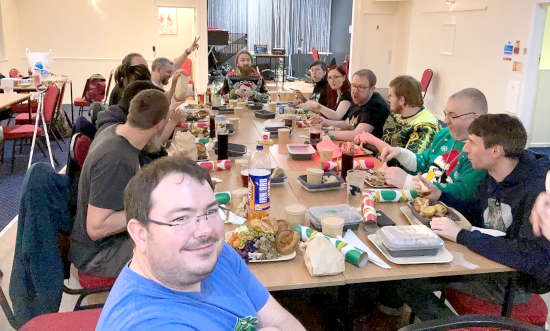 We have produced a stable funding platform to guarantee our future.  We now have a merch store so that members can digitally pay their subs and help to fund the club through their purchases, a website which punches well above it's weight, a management team who understands what the members want and actively make that happen.
I am proud to say that we have created a space where people can put their work-a-day worries aside and for 4 hours escape to worlds of wonder safe in the knowledge that the people around them have their best intentions at heart.

However, the most important thing is that this club is full of excellent people who are the most engaged bunch of players and gamesmasters that I have ever had the pleasure to call my friends.  Here is a toast to the future and the roads we will journey together.
Fellow Dragons... Live long and prosper.
Posted by Tony Bro001 at 14:21