Bob Dylan sang "Oh the times, they are a changing..." and never a truer word was said about how the advent of tablets has changed the fortunes of boardgame and RPG companies.  As a long time Mac user I'd long since accepted my platform as an afterthought from games companies like Wizards of the Coast when making e versions of their popular products so you can imagine my surprise when bumbling around on the App store I found a new official Dungeons & Dragons game!!  Minutes later the download was done and I was ready to get my dungeon bash on... 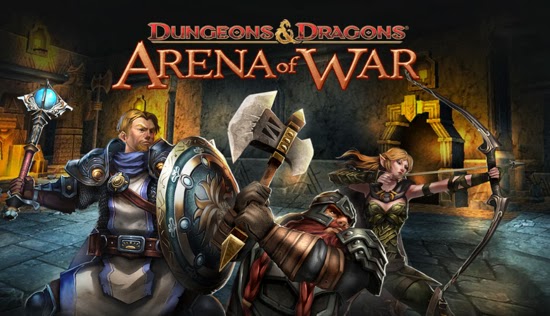 NOT WHAT I WAS EXPECTING...

I'll get this out there at the beginning of this review. If you want a like for like simulacrum of a D&D encounter, this app is not for you as once you're past the initial character generation screens and into your first "tutorial" adventure, your carefully imagined plans of strategic movement go out of the window when you realise that this is ANGRY BIRDS D&D!!. Yes that's right, the only way you interact with your character is by using a bizarre slingshot technique to fire yourself at random monsters dotted around an arena.  However, as this is WotC's first iOS release I'm going to give them the benefit of doubt and delve a little deeper.

You get a nice selection of characters to begin with which cover the usual spectrum of races and classes with options to change clothing and gender.  The main thrust of character development is reserved for a system of powers much like 4th Edition D&D.  These powers can be enhanced to increase damage (and oddly HP) and you can swap powers between quests to take full advantage of each new ability or upgrade.

There are 3 Quest Books to begin with (Baldur's Gate, The Trade Way and Northern Sword Coast) each of which you will unlock as you progress through the game.  You will be also be rewarded with Daily Quests for levels you've already cleared and for two days of the week you get to have a crack at the Undermountain quests (a sort of ranking tournament).  Each quest costs Quest Energy (QE) to join and you have 100 QE to begin with which recharges on a timer system.  You can also use Potions to recharge your QE instantly and each time you level up it automatically recharges to full.

Each Quest is essentially an encounter in a single location comprising of a bunch of monsters which attack you in waves.  The locations are nicely rendered but a little monotonous and reflect the overall theme of the Quest level you are on, so dungeon quests are inside rooms and wilderness quests are in forest glades.  The edges of each location have features like walls, teleportation portals, gas vents or spring traps which you need to utilise (or avoid) in order to maximise your combat potential.

The reward for completing quests varies but essentially is a combination of powers, enhancement scrolls or potions of Quest Energy.

As I mentioned earlier you use the slingshot interface to fire your character into monsters with a charging attack. As soon as you start to drag backwards (ie away from your intended target) a small power bar will start to extend from the circle to indicate how far you will charge. Whilst this is fine when your characters are in the middle of the screen, if they are close to a wall you can end up being restricted in the amount of power you can apply and coming up too short. When using Heroes with a missile attack you need to pull back only slightly, they will then move forward a small amount (or not at all if you're really good) and fire off an arrow, thereby stopping them charging across the room straight into danger.

Although this is a weird (and to be honest a little random) interface it does force you to use a few interesting techniques:

Ricochet: When you charge (or shoot an opponent) they get pushed back into another hero, enemy or bomb. When it's pushed back into a hero, they suffer an attack of opportunity, if it's another enemy then they both take additional damage; if it's a bomb it explodes damaging anyone in it's blast radius.

Rebound: A variation on the ricochet occurs when an enemy is pushed back into a wall and rebounds into the original attacker who then automatically attacks again.

The real trick in the game is to strategically chain these two techniques together to clear each wave of monsters as efficiently as possible.  On occasion I've manged to wipe an entire waves of enemies with just one move, but it was more luck than any type of strategy.

Each basic character comes with two power slots which you get to use during combat to cause effects or heavy damage, additional slots are unlocked as you progress through the game and unlock the Tier 2, 3 and 4 characters.

Powers are ranked from Common (C, C+), Rare (R, R+), Ultra Rare (UR, UR+) to  Legendary (L, L+) and can be enhanced by fusing identical lower level cards to them with the Fuse Power option.  Scrolls or different powers can also be fused, but are less effective.

You can then use the auto equip button to assign the strongest powers to your character and increase their Attack and HP values to take on tougher monsters in higher level quests.  Whilst this is a simple enough mechanism, it is a little obtuse and I have yet to understand how to get the best out of my upgrades.

The graphics, animations and interface are all flawlessly rendered and very reminiscent of other WotC products.  The quirky catapult mechanism is fun once you get the hang of it and whilst this will leave most experienced role players left wanting, it is quite a fun use of the D&D brand and has potential to bring younger players into the hobby.  It has some of the iconic elements of D&D such as monsters like the Gelatinous Cube and Beholder, a turn based combat system which feels like initiative and a simplistic system of character progression.

However, I still yearn for an experience closer to a simulation of an actual game, so come on WotC you've given me a taste of what you can do on iOS, I'm salivating to see some real D&D.

You can also check out a video walk through showing some actual game play on my new You tube channel Roleplay Geek TV.