I know what you did last Summer!

I was kindly asked by Joe Wetzel of Inkwell Ideas to contribute some random maps for his successful Creature and Encounter Decks Kickstarter project (I did the spaceship deck plans in Encounter Deck 2).  Joe sells these decks on his website which also contains some of the best RPG random generators the internet has to offer (like the amazing hexographer I reviewed in my mapping mini series) and comes highly recommended.


So What the Heck is an Encounter Deck?


It's a deck of 56 cards containing ideas for DMs to use either during play to add a little randomness or spice to their game.  They can also be used during scenario or campaign preparation as a random idea generator.

Each card has on one side:
and on the reverse side a generic scenario idea split into:


Example of their use as an Idea Generator


Here I've simply taken 7 different cards and selected one item from each category to use to generate my scenario.  I could have just used the entire scenario idea from the reverse of the same card, but my objective here is to generate something really random and get those creative juices flowing.  I've used cards from Encounter Deck 2 and referenced the card number next to each item for those of you who want to recreate my steps.


My Adventure Outline (as outlined using the cards above)


An evil plague is spreading over the land, leading to an influx of refugees into the capital city.  This plague is a magical slime whose epicentre is a town some twenty leagues from the capital.  The PCs have been passing a steady stream of refugees all day as they head in the direction of the town.  That night as they search for a likely looking camp spot they encounter a band of Gypsies.

The gypsies agree to let the PCs stay the night in their camp, which is unusually subdued, and during their conversations learn that the Gypsies have been blamed by the locals for the outbreak of this slime.  The Gypsies have nothing to do with it, but one of their number is a fortune teller who predicted that they would meet the PCs.  The Gypsies insist that one of the PCs must have their future foretold, during which they must forfeit some item of great value (or a lesser body part like a finger, toe or earlobe).

During the divination the gypsies reveal that they must retrieve the mystical cube from the shrine of St. Haute Pointe and take it to the slime infected town.  Once there, they will know what to do.

On the way to the shrine of St. Haute Pointe the PCs are ambushed by another adventuring party who are also heading to the shrine (but they are after a legendary chalice said to be able to restore missing minor body parts, observant PCs will notice that their leader has lost one of her ears).  There will most likely be a stand-off, a chase, another stand-off and the final realisation that the two parties are after entirely different things and either leave on good terms, or not.

After recovering the cube, the PCs finally arrive at the town.  From a hilltop vantage point they can see that the town is dotted with patches of this slime and overtime they will notice brown robed riders arrive in town on horseback and then leave shortly afterwards carrying a cylinder on their backs.

If they venture into town they will observe a cult of brown robed human monks congregating around the towns municipal water well.  They are decanting slime and something like frogspawn from the well into these cylinders and handing them to the dispatch riders who arrive in town.  All the while chanting some eldritch verse.

The solution to the PCs problem is to slay the monks and venture down the well where they discover some small innocuous looking creature the monks have chained up, laying its eggs.  If they capture one of the monks, preferably the leader, they can transport him and a frozen sample of the eggs back to the capital for the Lord's apothecaries to inspect.

To Adventure and Beyond

Naturally, the Lord rewards the PCs for their heroism and then mention that he has another problem of a delicate nature.  He explains that as a young man he had an unfortunate hunting accident and now the kingdom (and his wife) is pressing him to sire an heir.  He's heard that there's a fabled chalice, located somewhere in the kingdom, that is rumoured to have the power to restore minor body parts...
Posted by Tony Bro001 at 12:00 2 comments:

99 Problems but the Pole ain't One

My regular gaming group are currently experiencing the Liberation of the Demon Slayer an old school gonzo module by Venger Satanis with maps by Dyson Logos.

The beginning of the module has them preparing to delve into the caverns outside the village of Clear Meadow in search of a fabled magic sword, the villagers kindly provide 3 days rations, 30 foot of rope and a 10 foot pole to each brave soul willing to enter.  My players are unfamiliar with old school dungeoneering so I've taken the liberty of preparing a short list of things they can do with their pole in the style of popular urban troubadour Jay Z... 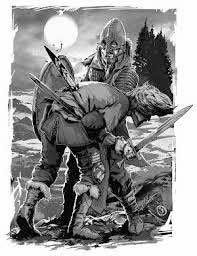 I'm doing plenty of new things so far this year, and one I can now cross off the list is to back a kickstarter and so I pledged my support for Troll Lord Games latest project for their rules light OSR style system Castles and Crusades.

The Codex Nordica is a 128+ page book filled with all manner of content, from a complete guide to Viking Mythology for everyone's use, from new spells for characters to monsters for Castle Keepers/Game Masters.  The great thing about these OSR modules is that they're easy to repurpose for other Fantasy RPGs so even if you're not a fan of C&C, you can easily add some Vikings into your campaign setting.

The stretch goals already include 3 bonus adventures and Odin's Rune Tiles and if it gets to 300 backers, they'll throw in some custom C&C dice made by Crystal Caste.

The great thing is that they've already hit their funding goal so this can only get better.

For more details go to the Codex Nordica Kickstarter page.
Posted by Tony Bro001 at 15:42 No comments: