The judges are faced with 4 choices stay at Nowhere and wait for the Ships, Go back to the ships or go to bartertown or to go on their own to the lawman outpost.

Judges decide to leave the mulgoons at Nowhere and head out to the Lawman Outpost.  Against the advice of Uncle Jessie they choose to ride through the night.

As they thuder northwards in an arrow head formation through the radioactive desert they are suddenly attacked by a swarm of four winged bird like creatures with long beak like proboscis.

A bird swoops down out of the black sky stabs Judge Hammer in the shoulder.  As he wrestles with the creature he loses control of his lawmaster which veers violently right and crests a small sand dune launching it into the darkeness.  Heading up the formation Judge Uthred is hit in the head by one of the leathery winged creatures which frantically claws at his face.

"Bike Auto!" he shouts as he desperately tries to wrestle with the avian monstrosity.  Judge Teal shoots at the creature and misses planting 3 GP rounds into Uthred's lawmaster.  One bullet hits his bike computer causing the whole machine to grind to a halt.  Judge Cully rides alongside the slowing Lawmaster and clubs the creature with her daystick.

They stop their bikes and for the first time hear the leathery flapping of wings above them and realise that Hammer is missing.  Revving the two remaining bikes into life they U-turn back down the desert road with Uthred riding pillion on Teal's bike.  The wheeltracks of Hammer's bike are easy to find in and they crest the roadside berm to discover Hammer's bike embedded in a sand dune.  Judge Hammer is lying face down in the sand and they can hear a big swarm of rad birds heading in their direction.  Teal and Uthred wrestle the bike out of the dune.  It is pretty beaten up but it starts and is rideable.  Cully administers some first aid and Hammer is revived and immediately grabs his lawgiver.

"Incendiary" he shouts and fires a single round over Cully's shoulder into the night sky.

A huge fireball erupts illuminating the swarm of rad birds which were circling overhead.  Bits of bird carcasse fall from the sky as the fireball expands.  The birds fly off.

The Judges leave Uthred's bike at the roadside and carry on through the night as best they can.  Hammer's bike would be considered unserviceable in Sector 55, but in the Cursed Earth you have to make do with what you've got.

By early morning the desert road fades into tarmac and they soon realise that they are riding on a pre-atomic highway.  It is not long before the road comes to an abrubt end on a broken bridge spanning a wide valley.  On the valley floor is their destination, a squat octagonal concrete building with a telecommunications array on its roof.

Surrounding the building are 4 black vehicles emblazoned with the Skull & Scissor motif of Muldoon. 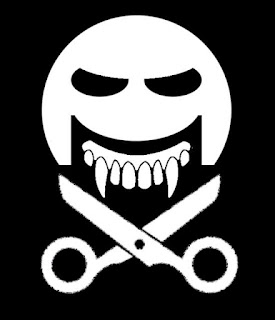