Prog 1 - Another Day in Mega City One 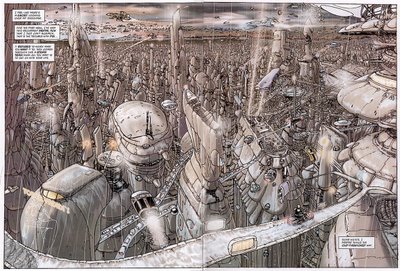 Another hot and sunny Wednesday afternoon's patrol in sector 55 begins with a briefing.  Patrol Chief Belloch informs the assembled Judges that weather control has a ten minute shower programmed for 14:00 hours.  Elon Deerscent is going to be unveiling the latest stretch of his super duper loop with a big ribbon cutting ceremony at the newly commissioned Loop Plaza near Steve Jobs Block.  Lastly, Sector 55 is hosting the Fidget Spinner World Series later and expects a large number of competitiors  and tourist fans to be targetted by the locals or causing trouble.

Judges Holmes, Steele and Psi Judge Wallace mount up and head out to Loop Plaza on Meg 5535. As they approach the junction with 5527 the traffic has slowed to a crawl.  An impromptu roadblock is in place manned by two Judges, White and Greene.  Pleasantries are exchanged and the patrol takes the off-ramp for 5587 heading to Loop Plaza.

A few miles down the road Holmes suddenly realises that there was something wrong about those two judges.  White's left knee pad was on upside down.  She orders the patrol to do a swift 180 and ride back to the roadblock.

The two Judges are gone but their Lawmasters remain parked blocking the off ramp.  Two civs in grey corporate security uniforms flag them down.  They explain that the Judges requisitioned their truck and sped off towards the 5527 off-ramp.  The guards are really concerned as they forgot to tell the Judges to be careful, their truck is loaded with Nitro9 explosives and any sudden impacts will set the explosive off.

This looks like a classic case of Jimping and Road Piracy, but the Lawmasters are real which means somewhere there are a pair of Judges in trouble or worse dead.  The patrol soon finds a set of tyre marks  at the side of the road which swerves off into the undergrowth.  At the bottom of a short slope is an abandoned Fonda hatchback.  Wallace gingerly lifts the tailgate to reveal Judges White and Green, stripped down to their regulation underwear, bound and gagged in the trunk.

When released, the Judges explain that they were investigating this abandoned vehicle when they were jumped from behind and knocked out.  They didn't see their assailants and they woke up in the trunk of this car.

A message from Sector Control squawks over their helmet radios.  They had a drone cam following the truck but it went into a through-way in Thatcher Towers and never came out.  The judges head out to the block to investigate.

Thatcher Towers in the Eurozone

Arriving at the through-way the truck is abandoned awkwardly on the side of the road its rear doors wide open and cargo gone.  The only thing in the back of the truck are two piles of judges uniforms.  A cursory scan of the through-way identifies at least 4 block vid cams which might have caught the perps in the act.  They make their way to Thatcher Towers and enter the block at the level 250 atrium.

A demonstration is in full swing with a couple of thousand residents chanting about something called BREXIT.  On a stage at the far end of the atrium stand a few well dressed citizens below banners emblazoned with the the slogans "Vote Nigel"  "Vote Brexit".  At the moment this seems like a peaceful gathering but the Judges' training and experience tells them that a situation like this can get ugly fast.

However, their immediate concern is a missing cargo of Nitro-9 and so they head to the Block Security Station.  When they arrive it is in lockdown and after Steele shows his badge, the staff let them in.  The watch officer Dun Can tells the Judges that they are an old pre Apocalypse War block and their CCTV system can't surveil every camera simultaneously.  They don't have any footage from the cameras in the through-way as they are totally focussed on the rally in the atrium which has been going on for the last two weeks ever since Nigel Faraway was elected to the post of Citi-Def Block Commander.

Just as the Judges are about to wrap up their investigation, Chief Belloch shouts over the radio


"Steele where are you? You're supposed to be at Loop Plaza by now.  Get your asses down there pronto!"