In preparation for my next Judge Dredd Savage Worlds game at Dragons Keep Roleplay Club, I've been printing and painting like a banshee.  I covered this in my post about 15mm Judge Dredd Civillian Vehicles but now the Sky Surfers are complete. 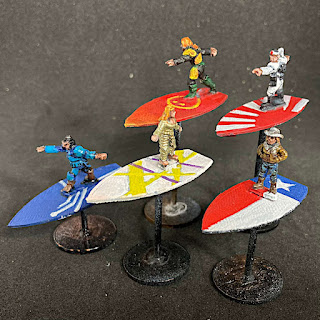 Supersurf 7 and the Midnight Surfer

Illegal competitive Sky Surfing was first introduced to the Dredd universe in the Midnight Surfer story (Progs 424 thru 429) and one of the iconic thrill packed stories which I devoured when I was a kid. Prog 425 has a great line-up of the contenders which I used as the inspiration for my surf dudes. 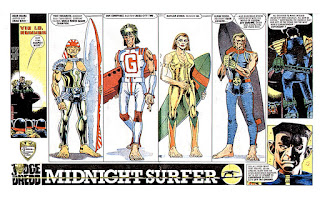 Supersurf 7 had a huge number of entrants, 57 in total, and many got no more than a partial reference in text or their name printed on the bottom of their boards.
Chopper returns in the epic 26 episode story Judge Dredd in Oz (Progs 545 thru 570) where escapes the iso cubes and journeys to Oz to participate in Supersurf 10.  Good vibes indeed.