Judges Cully, Hammer Teal and Uhtred clean up the crime scene at the mutie farmstead.  They agree that they need to send a message to the enemy at Black Gold Mesa as if it were from this raiding party.  Without a long distance radio and the right frequency they are out of options.  They decide to return to the land ships and consult with the pirate captains.

Back on board they discuss their predicament with Captain Scurvy Jack and El Diablo.  The ships don't have radios but there is one at the refuelling depot at Nowhere.

Pirate Law dictates that "You keep what you catch" and so Cully orders the prisoners to be hung from the yard arm untill they crack.  After a couple of hours Bob 211 has had enough and starts to spill the beans.  The Judges learn that :

Hammer negotiates with Scurvy Jack to let them run ahead to the provisioning outpost at Nowhere but the pirate captain doesn't trust him to not run with his tail between his legs to Bartertown and raise the alarm with Auntie.

Teal reminds Hammer about the Doobie Brothers incident at Merkel Mansions a few years back when they had to pretend to be Sector Gas Workers inspecting a leak.

Harmer uses a Birdie Lie detector to convince Scurvy Jack that he is telling the truth.  The Pirate agrees to let the Judges ride out to Nowhere and send their message.

On the Road to Nowhere

They ride through the night for 4 hours with Bobs 365 and 211 riding pillion until they reach the depot at Nowhere.  It's a small run down gas station surrounded by a fortified iron wall and heavy gates.  The Judges are challenged by the guards on the ramparts but they let them in.  Apparently they have been expected. 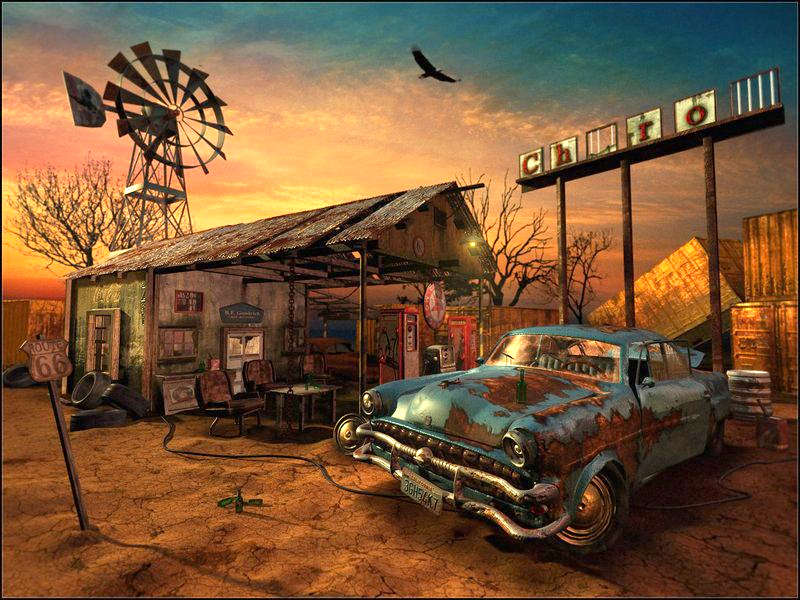 Uncle Jessie runs Nowhere with about a dozen men.  He is an elderly pirate who wears a battered red baseball cap which reads MAKE AMERICA GREAT AGAIN.  He takes them through to his office where the radio is set up.  He explains that The Pirate King called a few days ago and told him to expect 4 lawmen arriving with the Pinacolado and the Saint Mary.  He was surprised to see them on their own.

Teal explains that they ran into the mulgoons raiding a farmstead and rode ahead to use the radio to stave off a larger war party coming to find the Bobs.  Jessie regularly monitors the mulgoon transmissions and recalls that there was a raiding party operating due East a day or so ago.

He agrees to contact the Pirate King to ask permission.  Just as Jessie is about to blurt out over the radio that the lawmen have arrived, Hammer stops him.  Realising that these are unencrypted radio transmissions he tells the old man to talk in code.  He tells him to say "code 77" the Justice Department code for "Wally Squad" (undercover Judges) operations.  He assures Jessie that the Pirate King will understand.

Permission given they contact Black Gold Mesa pretending to be Team Falcon and report in that they are on their way back to base, delayed due to mechanical issues.