My weekly roundup of news and what I found on the internet.

The King is Back

Godzilla vs Kong hit streaming services this week and I have to say I was impressed.  It's another installment in the Legendary Pictures franchise comprising of Kong: Skull Island, Godzilla, and Godzilla: King of the Monsters.

The CGI is top notch and the story line pretty bonkers, but what you really came to see this movie for is a straight up duel between the two biggest monsters in Hollywood history.  There is plenty of additional content to excite fans of Kaiju movies and without spoilers, this isn't just about the two biggest Titans duking it out.

An all star cast of quality actors provide exposition and never overshadow the real stars.  This is a winning formula for Legendary and produces an insane mind blowing visual spectacle of a popcorn movie which is what the real fans are after.

In preparation for my current game at Dragons Keep Roleplay Club I had to invent an evil genius to be at the heart of the current problems that the city is experiencing.

In order to wreak revenge on an epic scale you need to have epic resources and epic managerial skills.  Whatever your evil scheme is you will need to amass resources through various shell companies and have unwitting minions essentially funnelling cash into your organisation to keep the lights running at your secret volcanic island hideaway.

Being a costumed superpowered crusader on the other hand is usually a solitary affair and thwarting evil schemes is a simple case of turning up doing a bit of blasting and then off to the next encounter.  There isn't much in the way of investment required.

And then I found some playthrough videos of Evil Genius 2: World Domination.  The designers have clearly looked long and deep and consider all the vital aspects of the evil genius business model.  Worth a look if you are into your worker placement simulations.  Available to download on Steam

If you aren't into computer games I can heartily recommend Mwahahaha! which is a 2 to 5 player boardgame which explores the same principles of resource gathering and minion management.  Published back in 2013 by White Wolf it is sadly out of print but copies can be snagged on eBay at a reasonable price. 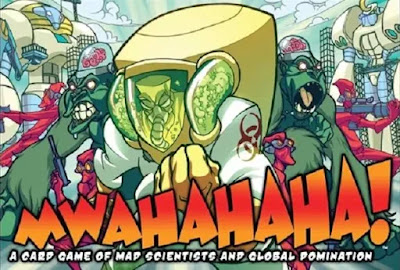 The long awaited season 5 trailer is out and it looks amazing.  As a fan of Combining Mecha anime such as Voltron (aka Beast King Go Lion) and 80s puppet show Star Fleet (aka X-Bomber) I am particularly looking forward to them exploring this trope.

Rick and Morty is chock full of great ideas for role playing games.  No genre is left untouched from their hypercritical and synical gaze.  One of the best sci-fi comedy series in the multiverse.

The new series on Sunday June 20th so yet another date for you to pop in your calendar.

Role Playing Games are a funny business to be in as it specifically appeals your creative side.  Once you have purchased the core rules for your system you and are actively encouraged to go off and write your own scenarios.  There is really not much incentive to keep buying core rulebooks.

However, whilst I love this part of the hobby as it scratches my story writting itch, I understand how important it is to support small creators who are doing some amazing work.  Scalping everything for free doesn't keep the lights on for most publishers.

In fact small publishers often do things for the love of the hobby are some of the most creative people out there which is another really good reason to lend them some financial support.

There are plenty of resources for the time poor DM such as Drive Thru RPG, DMs Guild or Dragonsfoot and one such creator is DMDave who publishes a host of Dungeons & Dragons materials via his Patreon subscription.

These are really high quality productions and feature battle maps by Miska's Maps, additional monster stat blocks and magic item cards.  I downloaded the Glaive of the Revenant King and this adventure is the real deal, a ready to run scenario.

Want a taste of how good his products are?  Just sign up to his mailing list and you will get a free D&D 5e scenario every month.