It's just another day in Sector 55 and Judge Belloch is giving his day watch briefing...

"Okay listen up cos I'm only going to say this once.  There have been increased reports of low level corpulent delinquency, the usual stuff, fatties hanging around outside munce burger joints and extorting the customers, blocking the pedways and just generally being a nuisance.  The head of local gang Mosh 55 got released from iso cubes yesterday so expect them to be full of juvie bravado.  Oh and there's an intermitten a fault in weather control so prepare for inclement weather.  Now get out there and bust some perps!"

Judges Teal, Hammer and Uthred peel out of the sector house on their law masters and it is not long before sector control routes them to a disturbance at Slooty Zute's Suite You, an upmarket clothes store on the Melania Boulevard level of Trump Tower.

As they park their lawmasters outside they see a juve punk cuffed to a holding post.  Teal challenges the punk and he reflexively raises both hands in surrender, clearly he is not cuffed to the holding post.  Uthred, unhappy with the lack of response from the punk, cuts to the chase and punches him squarely in the chest knocking him against the glasssteel door and he crumples to the ground winded.  The autodoors open automatically and the judges can see 3 more punks in the store.

Hammer springs into action and moves into the doorway and shouts "Freeze Punks!".  The juve on the floor shouts "Its the fuzz Sid!" and lashes out at Hammer with his foot.  The punks inside turn their attention to the Judges and the leader Vicious Sid opens up with his spit gun cutting the manequins to pieces and showering Uthred and Hammer in shrapnel which bounces off their armoured jumpsuits.

Judge Teal runs through the door shooting a 3 shot burst at Vicious Sid as he runs for cover behind a trio of mannequins.  It is clearly this punks lucky day as with a click the first round jams in Teal's lawgiver.  Uthred dives into the store and brings down a solid blow against the red head girl who blocks the blow with her spit gun.  Hammer moves to get line of sight on the fleeing Vicious Sid and plants a couple of GP rounds in his back.  Sid's luck has run out and the punk crashes to the floor knocking the carefully posed mannequins over like skittles in a bowling alley.  The fat punk behind the counter unloads both barrels of his stump gun at Judge Hammer missing wildy and ducks behind the counter to reload.

Teal moves to the corner of the display plinth, unjamming her gun but the fat punk behind the counter is behind cover so she throws her day stick bouncing it off the counter and onto his head.  Uthred cracks Debbie Destroy over the head concussing her as Hammer calls up an armour piercing round and shoots through the counter unsighted.  The round punches through the counter front but misses the perp.  Vicious Sid summons his last energy and desperately crawls towards the fire exit leaving a trail of blood behind him.

Uthred runs onto the plinth and launches himself feet first over the counter landing squarely on fat freddy pushing all the air and what little fight was left out of him.  Hammer runs round to the pitiful gang leader Sid and tells him to give up.  Sid continues to scratch his way towards the exit.  The Judge notes his reaction and "Brings down the hammer" crushing the back of his skull with his day stick.

Cowering on the clothes store floor are 3 civillians.  Owner, Zlooty Slute, his partner Whistler Floot and a customer Dapper John.  They pick themselves up and graciously thank the Judges for their timely intervention.

Only then do the Judges realises that the juve outside is gone.  They cuff the perps to the holding post outside and call for a Pat Wagon and a Meat Truck to haul their carcases off to the iso cubes and Resyk respectively.

Dapper John pushes his business card into Uthred's hand telling him that if he ever needs anything to give him a call.  Uthred has no idea who Dapper John is and looks back at him blankly.  Hammer recognises the citizen as a manscaping magnate and socialite who has several male grooming ventures throughout the city.

Judge Teal goes outside to see if she can see the juve punk.  The report of unexpected inclement weather is accurate as there appears to have been a short rain shower whilst they were engaged with the Mosh 55 punks.  Her observations are cut short by the piercing scream from the alleyway beside the clothes store.  Rushing to investigate she finds a hysterical woman leaning in shock against a wall pointing to the body of a bald headed man lying on the ground in front of a row of 3 vending machines.  Hammer and Uthred gain access to the alleyway through the fire exit.

Turning the body over, the unfortunate man appears to be in his late 40s and has had his throat torn out severing the carotid artery.  Death would have been swift as he would have bled out in under a minute. 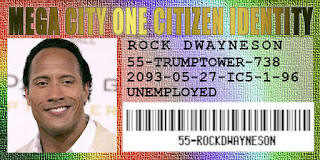 Searching the body turns up an MC1 ID Card and a door key card.  The victims is an unemployed local resident, Rock Dwayneson, 48 of Apartment 738 Trump Towers.

On closer inspection of the corpse they notice that the victim is bald yet his ID shows him with a full head of hair.  An examination of the crime scene does not turn up a toupee.  Is this a case of a mullett mugging with menaces or did he have some cred chips on him?

The woman is Victoria Nobody a young window dresser on her way to work at Plenty Bags of Style from her apartment in Amundsen & Abba.  She was about to buy a Synthi Joe when she found the body.  Her story checks out as her outfit is spotlessly clean and the crime scene is showered in blood so the Judges let her leave.

"Always a pleasure to serve the Justice Department.  Have a nice day Judge Teal"

It dawns on Teal that the vending robot may have seen the murderer.  Handing her caf to Hammer, she dials in another cup and asks the machine who used it today.  The machine cheerily replies "Back again so soon, you must be really thirsty.  You are my first customer today Judge."  A fresh hot cup of joe with a dash of hazlenut syrup plops onto the serving tray and the robots lights go dark.  Uthred suggests that they open it up and access its video logs.  A good idea if the trio were skilled Tek Judges but as Street Judges this is out of their particular skill and toolset.

At that moment the Resk  Meat Truck crew arrive to remove the dead bodies.  The Judges retrieve the gang's firearms and help load the perps into the Pat Wagon.  For their part in an Armed Robbery and a a serious assault this pair will be doing 40 years in the cubes before the day is out.

With a cold crime scene the Judges are left with three possible next steps: