The Judges descend to the 7th floor of Trump Tower and exit the elevator.  The decor is distinctly shabbier and it looks like these apartments are reserved for the tower's lower income citizens.  The tranquility of the upper floors is replaced by the smells and sounds of people living cheek by jowl.

The carpet in the corridor is decades old hasn't seen a cleaner in many years judging by the filth ingrained into it's bizarre repeating pattern. The judges overlook the designers horrific choices and locate apartment 738.

After a full sweep of Mr Dwayneson's apartment the judges find nothing out of the ordinary.

In the bedroom there are a series of 5 mannequin heads on a shelf wearing wigs and one empty head.  The heads all have sharpie labels, the missing one reads "The Magnum", the one matching his ID Card photo reads "The Black Mamba"

A message hand-written in sharpie on the dresser mirror reads.

"A HAIRY YOU IS A BETTER, MORE CONFIDENT YOU!"

In the trash is a plastic packaging for a Trend Topper Toupee "Magnum" hairpiece.

The screaming and shouting from the apartment 740 nextdoor intensifies.  It sounds like whoever lives there needs to blow off some steam in the Agrodome.  The apartment is registered to Brandon & Betty Blunder a married couple of 30 years.

Betty politely answers the door in curlers and a dressing gown.  Her husband Brandon is watching the Vid and tells his wife

"Get rid of the roz luv I'm trying to watch my COVID!!"

Mr Flowers is watching the new hit show CO-VID-55 which is sweeping the sector.  Celebrities caught in their own homes on hidden CCTV cameras.

The Justice Department doesn't take a position on censoring Vid shows until there is clear evidence of criminal activity.  As a result most Vid Shows either keep it clean or don't get a second season.

Betty tells the Judges that her next door neighbour is a lovely man, very quiet and in fact a model citizen.  She last saw Mr Dwayneson a couple of days ago and he was in high spirits as he had just purchased a new toupee and was eager to try it out.

If questioned Mr Blunder reveals that he used to have a management job at Resyk in charge of the team that operated the sludge-o-matic 3000 but was made redundant when they upgraded to the sludge-o-matic 4000.  He hasn't worked a day since.  He remarks that they used to live on the 300th floor and had a window in their apartment, but welfare didn't cover the rent and so the had to move further down the block.

Judge Teal notices Mr Blunder is clearly suffering from future shock syndrome making him a powder keg of negative emotions.  He way be okay today but he could blow at anytime and go on a killing spree.  He contacts Barney and orders a psyche evaluation just to be on the safe side.

The Judges move on to Apartment 736 which is unnocupied.  The bedroom is full of the detritus of the last occupant who clearly used it as a workshop for some electronics repair business.  A residency check reveals that the last occupant was a Freddy Slump who is currently serving 5 years for robot tampering.  Judge Hammer requests a criminal record retrieval from MAC.

They continue their house to house enquiries but the other residents have nothing further to give.

They decide to follow up on the Robo-Vend lead and head out to the factory located in the Elon Tusk Industrial Park.

The Fat and the Furious

Cruising along the Yes Way heading South Judge Uthred is hit in the face by a half eaten munce burger.  300 feet up ahead are three fatties riding souped up mobility scooters.

Mega City One is a tough place to police and low level civil disobedience like littering is the start of the slippery slope to recidivism.  The Justice department take a dim view and a guilty citizen can wind up in the iso cubes with a 6 month sentence.

Illegal Fattie Street Racing is one of the newer crazes in Mega City One.  Fattie juves with a need for speed souping up their mobility scooters and racing each other for kicks has become a real menace to the law abiding citizens.

The Judges give chase but the fatties don't come quietly weaving dangerously in and out of traffic.  Inevitably two of them lose control of their scooters.  One lurches into the path of a mopad and is instantly crushed to a pulp by the 50 tonne behemoth.  The other spears off the skedway and crashes into the plasteel guardrail erupting in a fireball.  The third pulls out a spit gun and sprays a hail of lead behind him.  Bullets pepper the windscreens of several vehicles between him and the Judges but miss their intended targets completely.

The surrounding traffic begins to veer out of lane and a huge pile up begins in slow motion.  Uthred and Hammer slam on their brakes to avoid colliding with vehicles and skid to a halt.  Teal remembers the words of his Justice Academy Driving Instructor Judge Talladega

"If you see a car spin ahead, aim directly for the smoke, when you get there, it won't be"

Teal bursts out of the smoke into clean bright sunshine with 100ft between him and the last fattie.  He opens up with his Cyclops Laser Cannon carving a trench in the road up ahead.  With no time to react the fattie scooter hits the gouge with its tiny wheels and comes to an abrupt halt.  The fattie is thrown forward and cut in two by his handlebars.  The top  half of his body landing 100ft further down the skedway.  Judge Teal mutters to himself "Well that only half worked"

Judges Uthred and Hammer radio in the incident and Sector Control tells them to begin triaging the scene, Emergency Response Crews are 10 minutes out.  They go from vehicle to vehicle assessing the damage.  7 dead and 14 seriously wounded.

Among the dead is registered mime artist Brittany Little.  He was thrown from his vehicle which has plowed into a tanker truck.  Highly flammable CHOO2 has leaked into the cabin of the vehicle which could explode at any time. 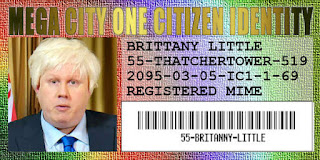 Mr Little has lacerations over his body consistent with being thrown from a moving vehicle.  Judge Uthred spots what appears to be a human bite mark on the man's bald head.  His newly issued ID card photo shows him sporting a full head of shocking white hair.

Without a care for his own safety, Hammer climbs into the CHOO2 sodden vehicle and searches for the missing wig.

He can't find it but retrieves a hold-all containing a stripy turtleneck sweater, a black beret, a pair of white gloves and some face make up.

Unregistered Miming is a crime in every sector in Mega City One with the unique exception of a small area surrounding Mitterand Maisons block in the Euro Zone.

With Med and Tek judges on scene at the Yes-a-Bout the Judges resume their investigation but decide to visit Brittany Little's apartment in Thatcher Tower.

Thatcher Tower was the focal point for an unsavoury politically motivated crime a couple of years ago - You can read more about this in the case files: Tales from Mega City One.

The apartment is of typical pre-Atomic construction but Mr Little has done his best to recreate the atmosphere of a 20th Century Parisian apartment complete with Toulouse Lautrect ballerina print and framed reproduction adverts for something called Absinthe.

In the bedroom the Judges find a collection of wigs and an accounts ledger.  A recent tax deductable expense for $99.99 has been entered with a description of "The Boris".  Uthred puts his access card in the bedroom comp terminal and pulls up the Trend Toppers Toupee website.  He searches for "The Boris" and "The Magnum" and finds product pages for each.  The wigs are in stock available direct from Trend Toppers or through numerous high street vendors.  Uthred recalls that he has a contact card for Dapper John and gives him a call.

Dapper John is initially reticent to reveal confidential client information to a Judge as he could face a confidentiality lawsuit.  When he is informed that the clients are now dead he divulges that The Boris was sold to a Mr Little a couple of weeks ago at his boutique in Trump Tower.  He explains he is not in his office so will get his people to look into Mr Dwayneson's purchase history.  He promises that they will "search the records with a fine toothed comb" and he'll get bake to Uthred Tomorrow.

Hammer, Teal and Uthred conclude their investigation in Thatcher Tower and head out to the Robo-Vend Factory.

The Robo-Vend factory is located in the Grimesy Wing of the Elon Tusk Industrial Park campus right  next door to the Sector 55 RESYK facility.

They are met by head of operations Mr Clark Jeremy.  He is more than happy to show the Judges their Business Operations Network Control Center (The BONCC) where they monitor the operations of the half a million vending machines distributed throughout Sector 55.

Whilst he is giving the Judges the grand tour a technician tries to interrupt him struggling to hold a cascading pile of computer printouts.  The technician wears a name badge W. Kidde - Area 51.

Jeremy shoos him away saying "not now Kidde! can't you see I'm busy?".  Faced with this intimidating and dismissive tirade of poor people management, the berated technician retreats  in a grovelling fashion.

Jeremy is very cooperative and shows the Judges the feeds from the cameras installed in the 3 vending machines in the alleyway.  He explains that the cameras are programmed to only operate in 2 circumstances;

Jeremy runs purchase checks on Rock Dwayneson, Victoria Nobody and Dapper John.  All three have prior purchase records at both the machine in the Alleyway and other machines in the sector.