The Judges park their bikes in a row outside The Two Ways pub, a seedy city bottom dive of a bar in Benny Hill Block. 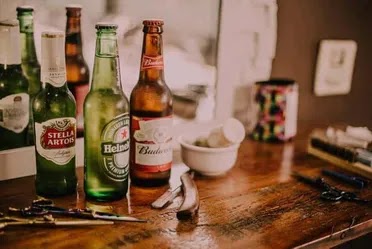 As they walk in the 10 tonne receptionist demands 2 creds entry fee.  Judge Teal shouts "we're Judges we don't pay entry fees".  Judge Govan engages the boxy receptionist and asks "is Rabies in tonight?" to which she replies in a monotonic female voice

"I'M NOT SAYING ANYTHING JUDGE GOVAN"

The Judges walk up the stairs revealling a run down bar with mid 1980s decor dominated by an oval podium surrounded by a substantial plasteel and glassteel balustrade on which a shiny gold go-gobot gyrates robotically to the sound of celtic rock music.

Sitting in the corner are two oldies in flat caps sipping their pints enjoying the show (Jack and Victor).

Behind the bar is a thin man with long hair (Jimmy) and a young woman with curly brown hair (Davina) who bears a striking resemblance to Tri-D TV Star David Tennant.

Cully engages the Davina in conversation "We are looking for Rabies Nesbitt, is he here"

"I don't know any Rabies, what about you Big Tam?" Davina asks.

The question ping pongs around the regulars, each one saying that they've never heard of a Rabies Nesbitt and passing it to another until the question gets to Wee Burnie.  The juve sniggeringly blurts "we have rats but no rabies, what about you da?" pointing the question at the man to his left who is trying to climb over the bar.

The clientel simultaneously gasp "Oh no it's Judge Govan!"

Jack and Victor both pull stumpguns out from inside their jackets and blast with both barrels.  Uthred takes one to the chest sending him flying across the room and Judge Govan catches another knocking him down the stairs in a shower of blood.

Judge Hammer spins round and shoots Jack in the chest knocking him into the corner between two sofas.

Davina pulls a stumpgun from below the bar "Nobody walks in an shoots up my bar unless I'm doing the shooting!" and unloads both barrells in Judge Cully's direction.  The recoil of the gun sends her two rounds into the podium lights showering the go-go bot in coloured glass as it runs off the stage towards the stairs.

Big Tam swings wildly at Judge Cully but misses and Judge Cully blasts Davina in the chest with two rounds and quickly targets Big Tam hitting him in the shoulder pushing him back against the bar.

Wee Burnie offers covering fire for his Da and shoots a small pistol in the general direction of Judge Teal.   Jimmy ducks for cover.

Teal dives behind what remains of the wall to the left of the stairs and hits Victor twice but the rounds don't penetrate the body armour he is wearing under his tweed jacket.

Cully shoots 3GP rounds at Victor hitting him with one in the chest and then one in the back of the head.

The crushinator trundles forward smashing through the reception wall screaming "DEFENSE, DEFENSE" as loud as her fembot voice unit can manage.

Hammer shoots Wee Burnie in the back and in the head.

The injured Uthred dives behind a sofa for cover and unleashes a volley of shots into Tam felling the big man like a caber.

In a scene which would be at home in a daytime detective serial Hammer leaps over the balustrade and threads his legs in the narrow space between bartop and overhead canopy.  His bum slides across the damp, shiny synthiwalnut effect surface and nails the landing behind the bar facing the wrong way.

Despite landing two high ex rounds into the pink refrigerator like fembot, the wounded Judge Govan is crushed to death slowly under her tremendous trundling treads.  In typical stoic fashion he never made as sound as the life was squeezed out from him like a tube of toothpaste.

Uthred launches himself onto the slab sided crushinator as Teal fires three armour piercing rounds into her torso.  Her mechanical voice slowly sings "DA...I..S..Y   D...A...I...S....Y" and the self propelled car crushing behemoth grinds to a halt.

As Hammer emerges from the bar to find Rabies already in the drivers seat of a red hatchback cranking its engine.  The engine roars into life and begins to pull away from its parking space. He plants a round in the windscreen shattering the safety glass into a crazed pattern, a second blows out the passenger side window and a third punches through the passenger side door.

Cully is in hot pusuit chasing the car down the street and firing a high ex into the tailgate which blows open and a cardboard box bounces out onto the road landing in a puddle.

The soggy sodden box begins to shake with a mind of its own and Hammer places a well aimed Incendiary round with pinpoint accuracy showering the box and the street in napalm.  High pitched animal screams can be heard briefly form inside the box as it is consumed by fire.

Cully dashes after the accelerating car and leaps onto roof as it careens down the street.  In an athletic move, she swings her legs into the car catching Rabies in the face with the heel of her boot.  Rabies head smashes into the glass of the drivers side window which shatters.

As the car turns the corner it careens into the row of neatly parked lawmasters smashing their shiny new body work as they tumble over onto one another like two wheeled dominos.  The damage will mostly buff out maybe.

Teal hears the comotion outside and emerges from the pub to see a flash of red with a judge hanging half in and out of the door.  He takes out the passenger side rear tyre.

Hammer throws a tracking device at the fleeing automobile and it lands with a satisfyingly magnetic thunk on the back bumper next to a sticker that reads "My Other Car is a Mini".  "I got a bleeper on it" he triumphantly shouts into his helmet radio.

Giselle the Go-GoBot thought she had escaped the carage but as she runs down the street she hears the roaring engine of the red hatchback behind her.  A quick thinking Teal shoots the bot in the beehive knocking it out of the way of the speeding vehicle saving the innocent exotic dancing droid's life.

Cully wants to take this perp down and she spies another two boxes of what are most probably wig beasts in the back of his car.  However, "This is getting precarious" she thinks "With a tracker on him let's see where he runs to" and indelicately hurls herself from the car rolling to a stop at the kerbside. 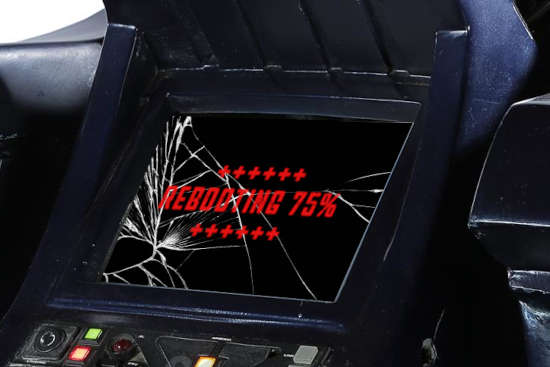 With a squeal and sparks from the right side rear wheel the car hurtles round the corner and out of sight in the direction of the West Wall.