A Black Alpha Alert means that Mega City One is dealing with a city wide disaster or epidemic and Justice Department resources are strained to breaking point.

Judges Cully, Hammer, Teal and Uhtred head out into the wasteland accompanied by the pirate ships Pinacolada, captained by Scurvy Jack, and the Saint Mary, captained by El Diablo.  The pirates have charted a route on the map which leads them to a refuelling point known as "Nowhere". 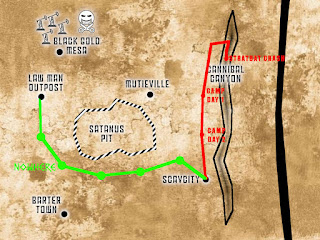 At midday a dust storm blows in,  Searing hot winds winds carry abrasive dust which gets everywhere clogging the bikes air filters.  The pirates lower the rear ramps of their ships with Cully and Teal boarding the Saint Mary.  Uhtred struggles to get his bike onto the Pinacolada and Hammer needs to go back out and help recover his bike.  Both bikes are damaged and take some fixing to get running again.

Visibility outside is very poor down to about 20 feet and the ships are sailing on instruments alone.  They crawl onwards through the blackness.

As night falls the storm shifts to acid rain and the ships grind to a halt.  El Diablo explains that the rain turns the dust to mud and the ships will just dig themselves into an early grave if they try to move.  They must wait it out until the storm passes.

Hammer and Uhtred find Jethro amusing himself playing a tin whistle.  They engage him in coversation patched across to all Judges via their helmet radios which are fortunately still working.

Jethro explains that he is glad that the Judges are going to get him to Black Oil Mesa.  He doesn't fancy their chances of beating Muldoon, but as long as they get him there he has a chance of finding the thing that Muldoon stole from him.  He also reveals that Muldoon betrayed him a long time ago.  Muldoon used to be a big thing in Mega City One some 15 years ago until he was stranded in a stratbat crash where he was badly injured.  Jethro rescued him and nursed him back to health.  Together they discovered the secret of the wild hair beasts and tamed a few.

Over the years this turned into a lucrative business and they traded hair beast meat with the free towns a welcome alternative to square pigs.  Muldoon always yearned to return to Mega City One and he managed to make contact but was refused entry having spent too long in the Cursed Earth.  In the following months Muldoon's mood darkened and he betrayed Jethro forcing him to flee for his life.  Muldoon began to ruthlessley expand his empire soon after.

After a fitfull night of sleep, the Judges wake to the smells of sizzling square pig bacon.  The pirates are already hard at work swabbing the deck with vinegar water and repairing rigging.  It is not long before they are once again moving.

The Judges decide to once again take out their bikes and ride as escorts greatly increasing their range and firepower.  Around 2pm the pirates spot smoke on the horizon and the team head out to investigate.Cresting a dune reveals a small flat valley floor with a small farmstead at its center.  Two black vehicles, a van and a sedan, are hurtling around the building and their occupants seem to be attacking the homestead.

The Judges gun their bikes towards the farm and Teal strikes a lucky hit with his Cyclops Laser Cannon on the sedan which explodes showering the ground with scrap metal and body parts.

Hearing gun shots from inside the building, Cully heads for the front door and through a window spies a woman and a man with a shotgun.  "This is the Law" she cries and orders the man to put down his weapon"

Teal rides round to the rear of the property.  The van is parked with its side door open and 2 perps are trying to gain access to the building.  He lasers the van melting its engine block and shoots one of the perps at the door dead.  Uhtred follows suit melting a hot wide channel through the side of the vehicle.  Hammer's laser malfunctions and he opens up with his bike cannon collapsing the porch on the remaining perp at the door.  Five perps in the van fire back winging both Hammer and Uhtred.

Cully busts open the door and two 10 year old mutie boys flee the building.  She takes up a firing stance on the man who appears to be trying to reload his shotgun but her aim is blocked by the female mutie who pleads with her "Don't Shoot".  Teal fires an incendiary into the van which bursts into flame and two perps bail out from the vehicle and run away on fire.  Uhtred checks the van for survivors as Hammer punches his Lawmaster through the flimsy farmstead wall into the bathroom.

Cully pushes the woman out of the way and pistol whips the man with the shotgun to the floor.  She opens the door and drags the badly injured perp inside.  Teal chases down the fleeing perps and puts out their flames with a well aimed stumm gas grenade rendering the pair unconcious.  Whilst checking out the burning vehicle, Uhtred encounters some of the farm's livestock a six legged horse, a two headed goat and some chickens the size of large dogs.  He briefly considers calling sector control and having the Animal Squad come out to deal with them but remembers he is a long way from home.  Concerned that the crime scene could still be harbouring perps, Hammer checks the remaining rooms discovering two empty bedrooms and confidently shouts "CLEAR!".

Hammer interrogates the injured perp, Bob 365, revealing that this raiding party are mulgoons from Black Oil Mesa and were in regular contact with home base.  When they don't check in Muldoon will send more men in this direction.