With Black Ice Kanga and Toecutter riding in their land dinghy Judges Cully, Hammer, Teal and Uhtred ride due south in search of Scav City and the Pirate King.  As they ride they notice that they are being stalked by large dog shaped creatures which periodically reveal themselves on the dune tops both East and West of them.  When asked Kanga says "they're Rad Dogs, like big wolves, dangerous at ground level and smart, real smart.  They hunt in packs."

After 3 hours it begins to get dark and the team decide to stop and make camp.  Teal puts the bikes on overwatch mode set out at cardinal points.  They pitch their tends in a smaller circle with the pirate dinghy in the middle and settle in for the night.

Several times throughout the night the bikes radar is triggered and on one occasion Hammer's bike fires off 12 rounds from its bike cannon.

In the morning Hammer checks what his bike was shooting at.  Nothing, just a patch of dune which took the cannon burst and collapsed in a landslide.  They pop their Rad Pills, eat some ration bars, pack their tents and head out.

The morning goes without incident, the Rad Dogs are still following them.  At noon they see a cloud of dust and smoke ahead, a vehicle heading South.  Keeping pace with the dinghy it takes an hour for them to catch up to a ragged looking bus filled with fleeing refugees.  The bus slows to a stop and a short stumpy mutant gets out pleading for help.
He explains they have just escaped Mutieville and they have wounded on board.  The Judges agree to help and Cully administers first aid using her med kit.  The muties reveal that they escaped Mutieville a week ago, fleeing for their lives.  They lost three of their party, Harry, Dutch and Benjy to Lord Muldoons Hair Beast trackers.
Two days ago they ran into a pirate ship.  A huge wheeled monstrosity with a big skull for a figurehead.  They were attacked and five of their party were wounded but suddenly the pirates called off the attack and drove off East.  They are heading to Barter Town, the only free town left now that Mutieville is in the hands of Muldoon.  There are no menfolk left to defend it and they women, old people and children who remain are completely at the mercy of Lord Muldoon.  All the able bodied men have been taken to Black Oil Mesa to work the oil fields.
After patching up the wounded the bus departs and the Judges continue their journey until nightfall when they make camp just like last night.
Five hours after dark all hell breaks loose.  Hammer's bike fires off a sustained burst of cannon fire at something fleeing to the the West.  Langa bursts into Cully's tent screaming "They got the Toecutter... Dinosaur...  snatched my... first mate.
Hammer jumps on his bike and fires the cyclops laser into the darkness.  The laser melts a channel through the dunes like a hot knife through butter.  It illuminates the dunes and the Judges get a  brief glimpse of a pair of Rad Dogs howling atop one of the dunes 300ft away.  Returning to her tent Cully discovers a terrified Kanga cowering in fear.
Slapping him across the face as directed in section 215 of The Book of Law (Disaster Response and Civillian Casualties) she shouts at the visibly traumatised pirate "Pull yourself together you scurvy dog, are you positive it was a dinosaur?"
Hammer and Teal examine the bird like three toed tracks which came from the South, made a beeline for the pirates and then a 90 degree turn exiting East.  A trail of blood accompanies them and as they enter the dunes they find a severed human leg bitten off at the thigh.  Whatever took Toecutter was big and fast.  Even if they could find Toecutter in the darkness he would have bled to death in minutes.
The team decide to abandon the dinghy and ride through the darkness with Kanga riding pillion on Teal's bike.  As the sun rises over the horizon the rusty tangled scrap heap of iron that is Scav City looms in the distance.

An Audience with The Pirate King

The bulk of Scav City is not a permanent fixture rather it is a jumpled mess of pirate ships clustered around a central fortified tower.  The Tower itself is protected by ramshackle walls made from scrap iron and cars with a large oil filled moat encircling it.  The walls are festooned with spikes and sharp rusty iron blades making it look like a hedgdehog squatting in the desert.
As the Judges ride over the drawbridge they are surrounded by armed pirates brandishing swords, spears, harpoon and crossbows.  A man carrying a ping laudry basket orders them to put their weapons in the basket.  "Noone sees the Pirate King carrying a weapon... It is the Pirate Law!!"
Teal makes a point of telling the man that if anyone touches his gun other than him... "it will go boom!!"
The Judges are led into the tower and into a throne room lit by hundreds of oil lamps and candles.  On the throne sits an old pirate.
"Welcome Law Men.  Thank you for returning Kanga to me, I will deal with him later, but first I want to raise a glass and discuss what you are doing in the Cursed Earth.  Yo Ho Ho a bottle of Rum"
"Yo Ho Ho, fetch a bottle of rum and five glasses!!"  he shouts at one of his attendants who scurries off and returns with a shiny chrome car hubcap carrying 5 shot glasses and a bottle of rum.
"Everybody out!!  I will parley with the Lawmen alone." bellows the Pirate King.

An Old Judge and a New Law

With the room cleared the Pirate King explains his problem.
"Muldoon is a threat to Scav City.  He's taking over this part of the Cursed Earth and we don't have the firepower to defend ourselves.  There's an old lawman outpost North of here.  If you were to gain access with my men then we could get weapons and defend ourselves."
Judge Hammer thanks the Pirate King and extends a hand in the universal sign of friendship.  The Pirate King does likewise and Hammer grabs his hand turning it over to reveal the fading Justice Department ID tattoo on the back.
"You are a Judge!" Hammer exclaims.  "A long time ago maybe, but I learned that you can't teach Mega City Law to the Lawless.  You need a new Law.  Pirate Law.  I am old and won't be around for much longer and I need someone who can replace me.  Think you got the cojones boy?"
"Twenty men and two ships crewed by my best captains.  What do ya say? Do we have a deal?"
The Judges ponder their a situation.  Muldoon has the perp and perhaps the outpost has equipment they can use to get in and neutralize Muldoon and exfiltrate Nesbitt.  They reluctantly agree. 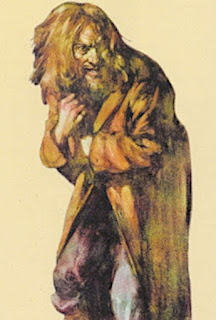 With a deal struck the doors to the throne room are opened and a throng of pirates enters bringing food and drink.  The Judges are introduced to the two captains who will be accompanying their expedition Scurvy Jack and El Diablo.
As the revelries continue Teal notices one shadowy figure who appears to be surfing tables grabbing half finished drinks.  He corners the figure and engages him in conversation.
"The names, Cross Eyed Jethro.  I knows Muldoon's secret, He's like you from the Mega City.  Get me on your excursion and I will tell you everything.  The Pirate King has never met Muldoon, but I know him well."
Teal tells the Pirate King that he wants Jethro on the expedition to which he agrees.