The Judges spend some time observing the mulgoons in the valley below and decide that the best plan of attack is to divide and conquer in a pincer movement.

Sweeping down from the valley walls they thunder towards the two in two formations catching the mulgoons by surprise.  Judge Teal with Uthred riding pillion fires his cyclops laser at the front of a saloon.  The white hot beam carves the vehicle neatly in two halves like a hot knife through butter.  As the two halves peel away from each other Teal expertly guides his bike through the middle and the Judges pick off the passengers with their lawgivers.  Cully approaches the East side and deals summary justice to a van as it is accelerates towards them.  The Mulgoons are no match for well trained judges and the remaining vehicles are taken out of commission swiftly.

Rounding the 30ft high structure reveals a large 20 foot high blast door in the north wall with a sand scoured and faded number 12 painted in a familiar justice department font.  On the right hand door a small metal panel is etched with an outstretched palm print.  Placing her hand on the panel Judge Cully notices a thin green laser beam shoot out and read the barcode on the underside of her wrist.

A confirmatory bleep and then a few moments later the sounds of whirring and clanking machinery issue from the structure.  Large Synthisteel bolts are withdrawn and the doors begin to crack open.

The interior of the structure is bare with the exception of the large square cargo elevator and numerous gantry cranes and walkways which crisscross the ceiling.  A control podium stands in one corner of the elevator.  Wiping its dusty fascia clean reveals a small cross section map and three subterranean levels:

Sub Level 1 - The Judges search the floor and find a well stocked medical center but without the customary autodocs and sleeppods that would be a staple feature of a sector house med centre.  In fact this facility looks like it has been abandoned for decades.  They patch themselves up as best they can after their recent encounter with the Rad Birds.

Sub Level 2 - It is clear that this floor has been stripped clean of the most useful pieces of Equipment.  The judges hopes are lifted when in one corner of the motor pool they discover the familiar silhouette of an H-Wagon.  On closer ispection this is but a shell of its former glory having been stripped of all its engines avionics and comms gear.  The Judges find an array of old stub guns and ammunition several bazookas and two flight cases containing mint condition MK1 Lawmasters. Cully takes a shine to one of the bazookas and packs 10 rounds just in case.

Searching the Barracks they discover a series of lockers each assigned to a previous owner going by the array of names etched into their magnetic ID plates.  Inside are vacuum packed bags containing vintage  Judge uniforms.  Noone has been seen wearing the "Ol' bubble dome" helmets in years but their current outfits have seen better days. 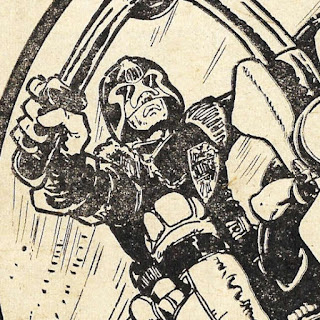 Sub Level 3 - The Power Room is filled with a mass of machinery, boilers, generators and water treatment tanks.  A dark service tunnel dominates the north wall and is filled with many pipes and conduits.  It clearly leads somewhere.

Cully and Hammer return to Level 1 to see if they can't ressurect the ancient communications array and get a signal out to someone back home.  The outpost seems to be running on back up power and all non essential systems are off.

Teal and Uthred descend to Level 3 to see if they can get the power back on.  Uthred's affinity with machines pays off and he determines that the outpost has run low on fuel, in fact the tanks are almost empty.  Despite several attempts to fill the tanks using the control panel, it appears there is a malfunction in a valve.  They trace the pipes that feed the fuel tanks back into the mouth of the tunnel.  proceeding about a hundred metres into the tunnel they discover the valve whose servo appears to have burnt out.  Manually turning the valve gets the gas flowing.  Flush with success they don't notice the three hair beasts creep up on them and attack.

Meanwhile on Level 1, Cully and Hammer have realised that the transmitter power is weak.  The outposts antenna must have been damaged and they resolve to climb up the service shaft onto the roof and see if it can be fixed. Grabbing some basic electrical repair tools they begin the climb.

On the roof is a storm battered antenna mast and a broken satellite dish.  The cables from the comms room enter a junction box at the base of the mast.  The cover is loose and it looks like some small rodent got in here and chewed the cables.  An easy repair for Judge Hammer, but Judge Cully spies a dark cloud approaching from the south.  A flock of angry rad birds, approaching fast.

Teal and Uthred deal with the hairbeasts in short order and return to the relative safety of the power room.  The fuel tank fills to above its minimum mark quickly and they restore the outpost to operational power levels.

On the roof Judge Hammer frantically splices cables as the rad birds approach.  Cully fires a bazooka round into their midst and a firey ball erupts diminishing their number but not enough to deter them and they begin to swoop down.  As Cully begins firing grenade rounds at the swarm, Hammer finishes his repairs and reaches round with an incendiary round.  A white hot ball of phosphor flame catches the leading edge of the swarm and the birds wheel away giving the pair of Judges just enough time to ext the roof and slam the iron access door down as the birds slam into it.  A close call.

Reassembling in the comms room the Judges finally manage to get a strong enough signal out to Mega City One using an old morse code unit that probably hasn't seen action in 100 years.  They punch in a request for an H-Wagon and that they have located the suspect at Black Gold Mesa.

A message comes back

The team know that Black Alpha is a city wide threat event and that they are on their own from here.

The only thing they can do is see where that tunnel leads and maybe, just maybe they can get to Black Gold Mesa and find Nesbitt.