I bet that there aren't that many people who have painted their Bones furniture.

This is a neat little Gothic Horror set which also comes with a female vampire and the treasure chest which I painted alongside the mimic in episode of this series.  You can buy the pieces individually:
The Well of Chaos (Bob Ridolfi SKU: 77136)

This is a pretty foreboding miniature and with a name like The Well of Chaos I had to fill it with blood.  I did have visions of lighting this with an LED from below (which I still might do) so I filled the well with a mix of 5 minute epoxy (Araldite) and a tiny bit of red paint.

The stream of blood is simply a strand of fibre optic which is fixed into two holes one in the well and one in the spout.  this is then coated with the red epoxy. 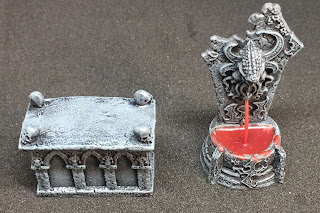 For such a scary sounding mini this is pretty uninspiring but it has a big enough cavity that I can run fibre optics from the skull eyes to a green LED.  Should liven things up a bit.

The Dias (Me SKU: free to download from Thingiverse)

In order to light up these minis I'm going to need a battery compartment and to be honest these two items need to be elevated for dramatic effect.  I designed a 3x4 inch dias to accomodate both miniatures as seen in the crypt photo above.