The great thing about the Bones Kickstarter was the sheer variety of minis.  The first wave included monsters, sci-fi, modern, undead and of course quite a few player character minis.  This week we have three personalities who could quite easily represent PCs,NPCs or villains.

I really like this sculpt and the first Jeff Grace creation I have painted.  The costume is interesting and the pose fierce but regal.  Nice work Jeff. 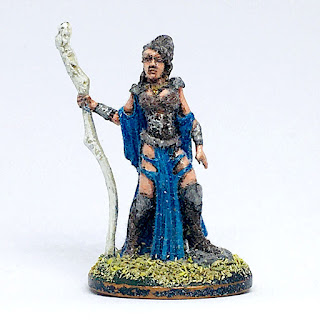 Okay so my mini got a bit of customization.  I needed a special character mini for a special D&D 5e campaign (only The Tomb of Annihilation).  My character was a bit special as well, Wizards of The Coast had just released the Magic The Gathering setting Ravnica for 5e and I opted to play a Vedalkan sucked into Faerûn by some magical contraption.  Vedalkan's don't have tails so Damien lost his and he got a blue paint job.  His Transformation into Kaori the Vedalkan Apprentice Wizard was complete.

Kaori died quite a few times along the way but fortunately was plucked from the clutches of the Soul Monger at the last minute, discovered interesting uses for Mold Earth, worked out that a Transmutation specialist is a bit useless if the dungeon has transmutation anti-magic zones and ultimately survived to reach 9th level. 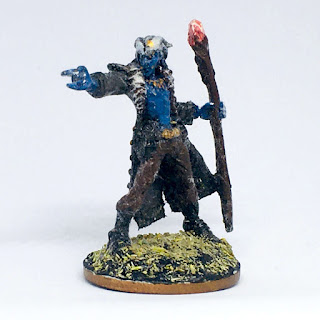 One of the Pathfinder range, Ezren is a pretty cool looking warrior wizard who will just as soon smack you round the chops with his crooked staff than turn you into a toad. 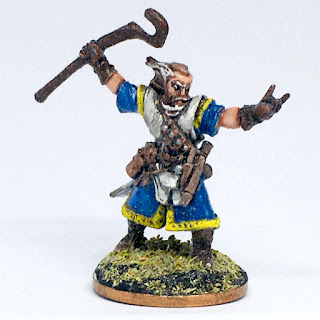