Today we celebrate George A Romero's Birthday with a bit of zombie posting.

My favourite zombie boardgame is Zombies!!!

Zombies!!! (yes the exclamations are part of the title) by Twilight Creations is a very big game for such a tiny box and a tiny price.

Get to the Chopper

The player's objective is to "explore" the town by randomly drawing a then placing a town tile as part of their turn then defeating any zombies which they come into contact with.  When they find the helipad tile they can try to reach it and win the game.

The stand out component for me are the town tiles which make up the board.  I think it is the frustrated town planner in me.  These geomorphs depict almost every type of building you are likely to encounter in a small town USA and I confess I have used them in many RPGs to quickly generate a town for my players.

As the board is generated the number of zombies increases with each new tile placed generating more and more for you to deal with.

Players also get to use the good and bad event cards throughout which introduces a Player vs Player element to the game.  These cards can really mess with your day or be the key to success and really ramp up the tension.

Gameplay is fast and simple.  Each player turn consists of the same steps:

If you die at any time you respawn back at the town square so nobody gets ejected from the game because they became zombie lunch.

Just like movie franchises, the sign of a popular game is often the number expansions it has.  Zombies is no exception and with 15 editions there is a lot to choose from.  If you want to recreate Dawn of The Dead, then there's Zombies!!! 3 - Mall Walkers.  If you want to explore the sewers then you need  Zombies!!! 6 - Six feet under.  If clowns are your thing then Zombies!!! 7 has you covered. 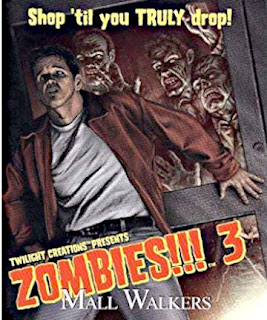 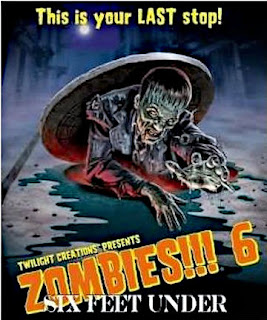 The Board Game Geek community has also created several house rule expansions to add flavour,  My own particular favourite is the addition of weapon cards which greatly enhance the game with ranged attacks.