A is for Adventurer (Superior Fantasy & Science Fiction Magazine) 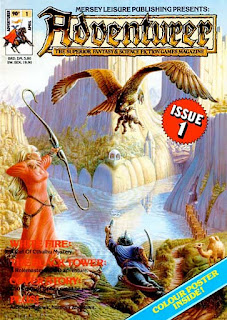 Adventurer was the first of the "independent" roleplaying magazines that made it out of specialist stores (in the US read FLGs) and into the High Street newsagents like John Menzies and W H Smiths.  Published by the liverpool based Mersey Leisure Publications, it  ran for a total of 11 issues between April 1986 and July 1987 and appeared in the wake of TSR UK's IMAGINE magazine which had closed the previous year.

It was put together by a small team on a small budget and the quality of the interior artwork sometimes suffered as a result, but that was always made up for by the glossy full-colour front covers.

The first issue featured:
Regular Columns were also present in the shape of:

Editor: Stephen "Ste" Dillon - Is this the same Steve Dillon who has since gone on to be a celebrated comicbook writer? you decide (see inset pics).

Artists: Robin Parry (who created the cover for issue 1) and George Jones.

When I could get hold of a copy I would pour through it avidly as it had a certain homebrew appeal and was pitched at a slightly maturer reader.

This was at a time when the other dominant force in the UK RPG (Games Workshop's White Dwarf) was still publishing RPG material for CoC, Golden Heroes and my favourite Judge Dredd and it had yet to morph into the Warhammer brochure that it is today.

I've since discovered that they're all available online via mediafire, if anyone else would like a slice of RPG nostalgia along with their cup of tea.