A fine post from Justin (The Alexandrian) about Advanced Node-Based Design with respect to scenarios made me realise that I'd been been doing this for years without realising that there was a formal theory surrounding it.  In an earlier article I described some of the techniques I've used to write linear plots, which can also be described in this node-based design approach like this: 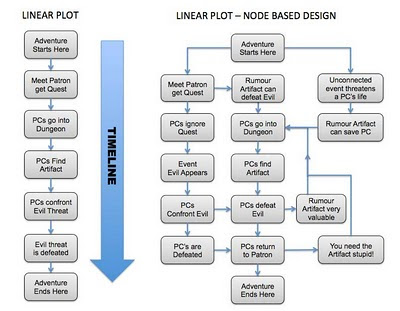 Although the example is deliberately simple it demonstrates how taking this approach can and does prepare you for almost any eventuality and may even reap rewards in the design stage by focusing your writing (in a similar way to a mind map) and offer other plot possibilities that you hadn't thought of initially.  Why does the patron want the artifact? Can it be used to control the Evil?  Was the patron behind the event which threatened the PCs life?

However, this node-based design approach works best with non-linear adventures, particularly those where investigation is required and the DM has left clues which send the PCs off in one direction or the other as in this example: 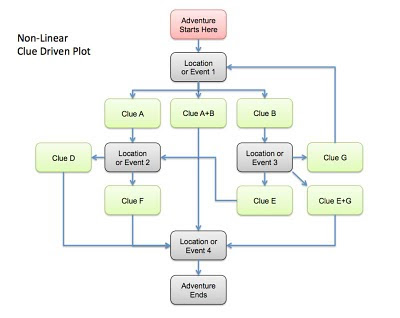 Again the deliberately simple diagram above only details Two Clues per node and I cannot reccomend enough the importance of following The Three Clue Rule lest your scenario grind to a halt in a choke point.  However, as you can see, the PCs may take any route through the scenario they choose and you will have already done the hard work of designing each node in advance and be prepared for most eventualities.

As Justin quite rightly points out these do not have to necessarily be clues, they can be events, objects or rumours which PUSH players into moving to the the next node or equally their desires can PULL them in a particular direction.  It's quite fun to watch your players sweat over equally enticing possibilities or for them to choose what they think is the easy option only for it to turn nasty.
Posted by Tony Bro001 at 10:04