Before Bendy Walls... before Dwarven Forge... before Hirst Arts... there was... 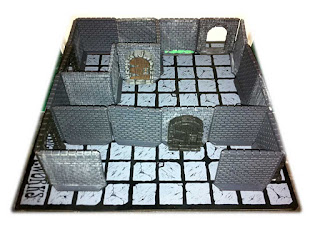 Released in 1991, the set consisted of a 10" square felt backed metal board with 1" square stone tiles printed on it's face.  The plastic walls and doors had a rectangular recess in the base to house a strip of magnetic plastic, a sort of thick version of that used in magnetic sign boards.

The corners of each wall section were mitred at 45 degrees so you could make convincing corners and but walls together to make corridors.  Door archways were also included in the set, but there were no doors themselves.  As you can see I added some resin cast doors to a few of the walls in my set. 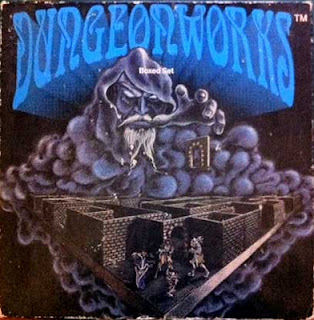 There was one huge problem with the whole set which I found almost immediately during play.  The walls are way too high and the board too small.  In fact my experiences with this set were partly behind my reasons to go with a 1.5" square floorplan scale and 1" hinch walls in my foamcard 3D dungeon, a winning combination in my opinion.

The miniatures end up being crammed into a tiny area and the board can only handle a maximum room size of 50'x50'.  I guess they were expecting you to buy more than one set, but it was too heavy to carry around compared with a box of cardstock floorplans, not to mention the price.
Posted by Tony Bro001 at 09:00