D is for Dungeon Floors

No self respecting DM in the 80s could get away without using cardstock dungeon floor plans.  Back in the 80s we didn't have photoshop and photo-quality printers, so if you wanted nice floorplans you needed to either make your own (and be very arts and crafty) or you could pop-along to your local specialist retailer and buy some ready made ones.  There were quite a few ranges to choose from:

Endless Plans (Endless Games 1983-?) - Not much info has survived about these other than that they were mostly two colour plans and were also featured in The Complete Dungeon Master series of boxed sets and Tortured Souls magazine.  There were at least 8 sets, with Set 8 being Forests, and they were very architectural in design.  As I recall you were meant to cut them out along the dotted lines and you could then build up quite intricate and irregular dungeons by layering pieces one on top of another.  This approach was novel, but futile and unplayable unless you had access to plenty of magic tape and an A3 photocopier.  The wilderness tiles did have overlayed crosses for movement but they were far too intricate to be really useful (in comparison with the Dungeon Planner or Dungeon Floor Plans sets around at he same time.


Dungeons & Dragons Dungeon Floor Plans (Games Workshop 1979) - Published by under license from TSR these are the granddaddy of all the Games Workshop floorplan sets and were reprinted in 1982 without any reference to the Dungeons and Dragons brand and also form the basis for the Dungeon Planner series reusing the same ground artwork.

Dungeon Planner (Games Workshop) - Neither of these are the traditional type of floorplans.  Each box set came with an A2 map of the area in question (1in to 5ft scale) and a booklet for the DM to write scenario specific information in blocks corresponding to the numbered locations.  The covers of the booklets also doubled as a DM's screen containing Encounter Tables and a black and white DM's version of the map with the rooms and doors numbered.  I particularly liked the fact that the doors were seperately numbered as it is irritating when running a commercial scenario to find the status of the doors in the last line (or worse buried in the middle) of the room description.

Dungeon Floor Plans (Artist Uncredited) - Designed in the same style as the Dungeon Planner series and based on the original Dungeons and Dragons Floorplans tile design.  The latter sets included an overlayed cross grid to aid movement which was also used in the Judge Dredd RPG floorplans which were included in the boxed game.  This series included:

DUNGEON Floor Plans (Games Workshop) - The previous sets released by GW all had a very flat feel to them, being at most 3 spot colours and no attempt was made to light, shadow or texture them.  The next floorplans series attempted to fix that and hence moved to a full colour printing process but the lack of a defined grid made them far less useful for roleplay even though they were very pretty.  The series was made up of:


Role-Play Floor Plans (Playtwice Ltd)  - I have one sheet (I have no idea when or where I acquired it) from one of the two sets published and they mimicked the Dungeon Floor Plans Set 1 but were slightly more colourful.  No lighting effects were present but you did get a good spread of floor accessories as can be seen in this period advert from Adventurer Magazine. 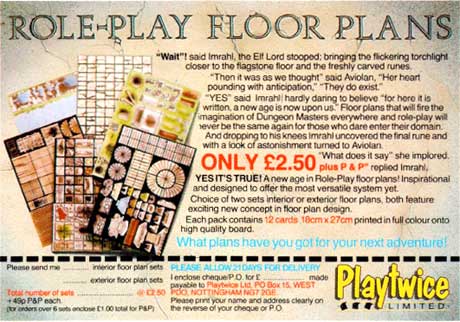 Other NoteableFloorplans from the Era
Collecting Dungeon Floors

Despite the rise in popularity of digital roleplaying platfroms such as Roll20 and Fantasy Grounds, there is a large base of players still using analog floorplans.  As result the products above can command high prices for what is essentially pieces of cardboard.  If you are a completist that doesn't matter you just have to search for Dungeon Floors on eBay.

Next: E is for Elric of Melniboné