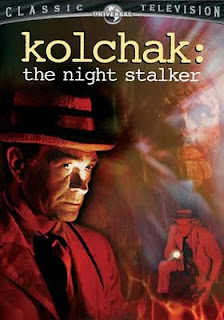 Just bagged myself a bargain in the shape of the boxed set of the TV Show Kolchak: The Night Stalker for only £8!! in my local Fopp in Earlham Street, London (directly opposite Orcs Nest)

For those who don't know the TV Show, Darren McGavin plays Carl Kolchak an investigative journalist who follows the strange and mysterious cases that the police either have bungled or can't solve.  It was made in the seventies and has been acknowledged by Chris Carter as a major influence in the X-Files, (McGavin was also cast in two episodes of the show and featured in Carter's other project Millenium).

In my opinion it's de rigeur viewing for anyone thinking of running a modern horror game such as Cthulhu Now, Delta Green, Consipiracy X or Dark Conspiracy.

I remember watching it in my teens when it was re-run on BBC2 and I loved it from the get-go, so I can't wait to see if it's lost any of it's charm in the last 20 years.  Stay tuned for episode reviews...
Posted by Tony Bro001 at 13:51