The Streets of Mega City One are littered with an array of crazy looking vehicles which George Barris or Ed "Big Daddy" Roth would have been proud to have designed.  But finding 15mm scale civilian vehicles which fit the genre aesthetic is harder than I imagined.

An eclectic mix of vehicles from various sources

Bladerunner 2049 Spinners (Thingiverse 3760309) - These two designs are inspired by the 2017 sequel to probably the greatest sci-fi movie of all time.  The designs build upon the original iconic spinner with an angular aesthetic which was apparently inspired by a sidewalk snow sweeper. 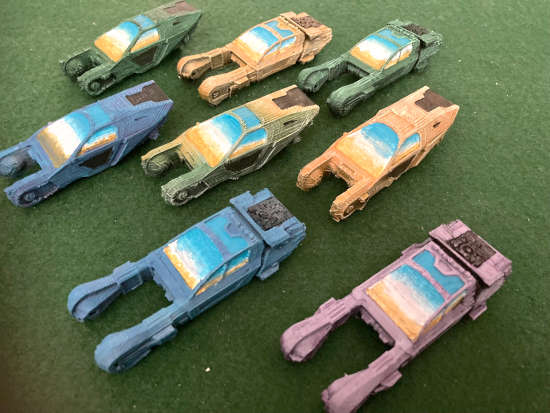 Flit Cars (Alternative Armies V101) - These cool looking 2 seat hover roadsters are perfect for the perp about town.  The models are resin cast and quite reasonably priced although a little small for 15mm, 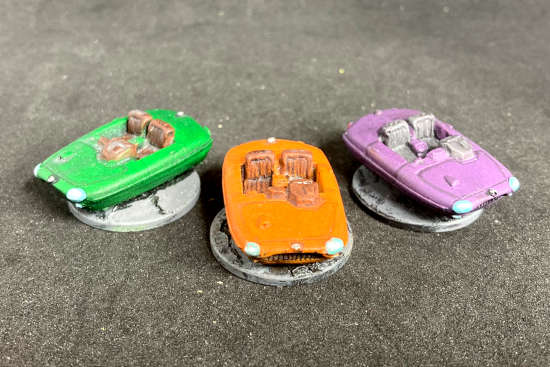 Hover Van (Alternative Armies V103) - A very utilitarian flat bed pickup style van which can also double as a meat wagon in a pinch,  A resin cast piece which is elevated on a resin plinth for that hovering vibe. 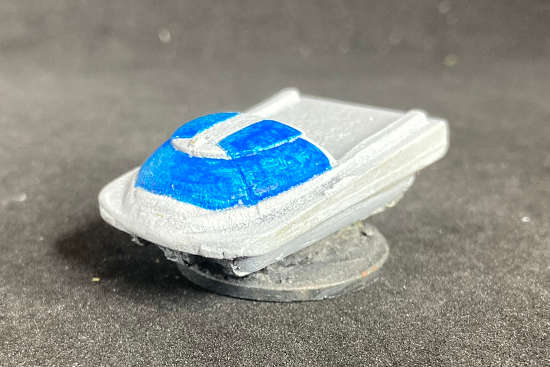 H-Wagon (my own 3D design) - Heavily influenced by some early iconic Dredd artwork by Mike McMahon this H-Wagon is the workhorse of the Justice Department.  Whether it is being used as a perp transport, a meatwagon, an APC or just as a mobile patrol vehicle, the H-Wagon is a stalwart and dependable vehicle and a common sight on the streets of Mega City One. 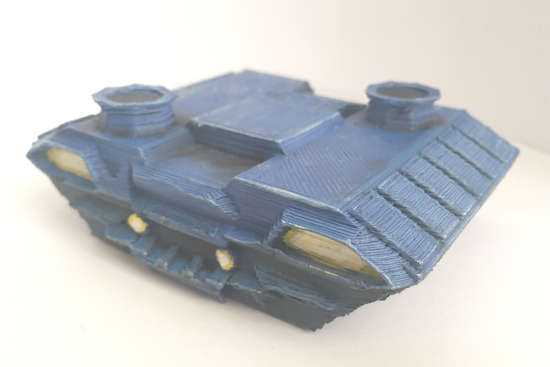 Bus (3D Print ) - I can't remember where I downloaded this mini bus from but I have 2 in my fleet. 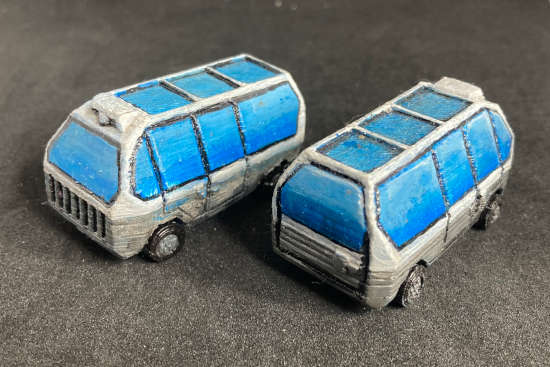 Korben's Taxi (Thing 2639417) - I couldn't say no to a 5th Element Taxi and the great thing is that it looks cool as a civilian sedan too. 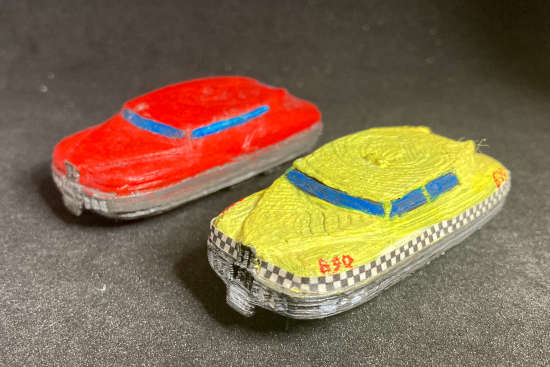 Cargo Truck (my own design) - Sadly the file for this has long since been lost to a dead laptop, this was before I imortalised my designs on Thingiverse.  As I need more trucks, and I've gotten much better at 3D modelling I'm inclined to try this again.  I will of course include more 80s movie references in the panel art. 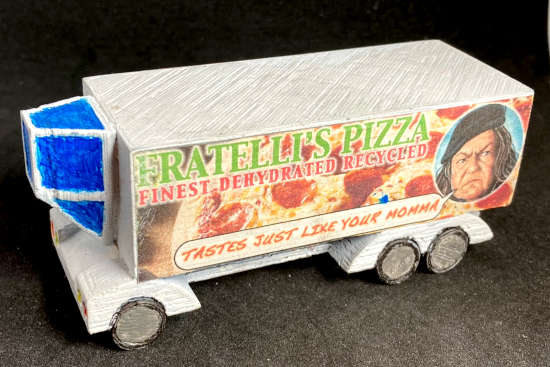 URSA Tracked Truck (Thing 4513543) - One of three vehicles the Industrial Vehicles collection from Shiaic1 on Thingiverse.  It's a solid looking small cargo hauler and we won't mention the fact that tracked vehicles are a bit of an anachronism on the bustling highways of the city of the future.  It looks cool and that's good enough for me.  It comes with two optional cargo beds either a box truck or a tanker. 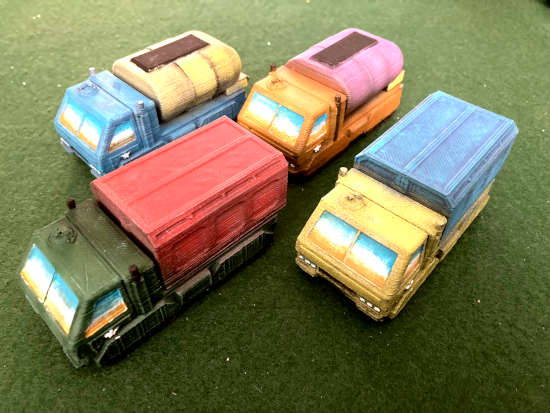 Big Tanker (Thing 4513543) - Another from Shiaic1's Industrial Vehicles Collection.  This bad boy barely fit on my printbed and took almost 10 hours to print.  Once again this is scaled up 300% from it's Epic scale (6mm) original size but the quality holds.  Easy clean up despite a huge amount of support material. 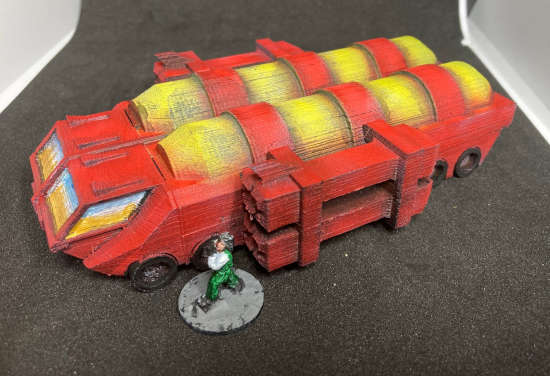 What I want to include in my fleet

A Mo-Pad - The motorised home of the future which spends its entire life cruising the 13 billion miles of megways.  It is rumoured that some citizens have spent their entire lives travelling from sector to sector aboard their mobile home having never once set foot on the streets of Mega City One.  There is no definitive design for these mobile monstrosities but one of my favourites comes from the Mega Rackets Crime Files strip in Prog 219. 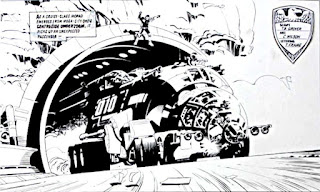 Trucks - The citizens of Mega City One need to be fed, clothed and entertained and there should be a steady stream of robo-trucks plying the megways fulfilling their every need.  As I mentioned earlier this is a perfect opportunity for me to dust off my modelling skills and put together a kit of parts so that you can mix and match bodies cabs and wheel configurations to suit the cargo.  This could also be a good way to kickstart a mo-pad build.

The Killdozer - This beast of a vehicle (actually two vehicles) was a major tie-in with Matchbox toys under the "Adventure 2000" brand name back in the day.  The diecast vehicle is sadly not 15mm scale but a nice 3D Printable version is available from Thingiverse.  Whilst the original never survived its journey out into the Cursed Earth, a model exists in the museum of the Halls of Justice and every now and then gets put out on a tour of the sectors.

Sky Surfers (Thing 5177927) - "Chopper Lives" is a slogan that almost every citizen will have seen scrawled on a wall, on the seat back of a mono-rail or on the side of their neighbours block in letters 50ft tall.  The most famous skysurfer of them all needs to make a comeback and be chased down by a patrol of judges.  Why stop at one, when you can make a whole lineup of surfer dudes waiting to become the next greatest thing.

I've designed and printed out some surf boards I just need to find suitably posed surfer dudes to go on them.  If you want some of your own head on over to Thingiverse. 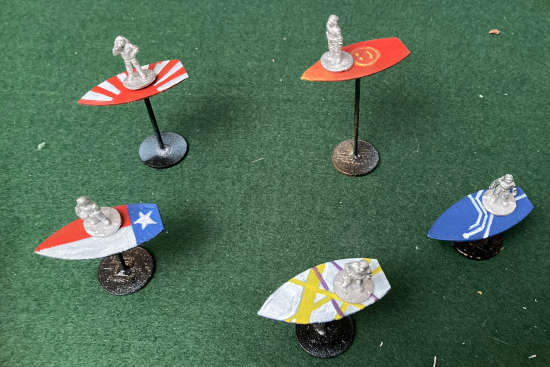