A bit of a click-bait title I admit, but if you haven't seen the Netflix detective comedy Swedish Dicks then you are missing out. 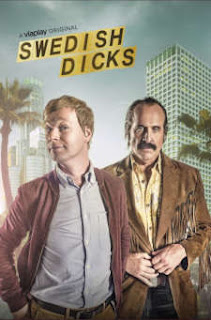 Specifically I am referring to the plot of the episode "Floyd Cal Who" in which Ingmar (Peter Stomare) and Alex (Johan Glans) are hired by internet dating app millionaire Dave (Haley Joel Osment) to find the hitman he hired to kill him.

Years earlier, before his dating app went viral, Dave was depressed and decided to end it all but couldn't face doing it himself, so he hired a hitman.  Now a succsessful tech entrepreneur he has millions of reasons to live so he wants the hit called off.

I thought this was a really interesting plot line and one particularly well suited to the sci-fi genre.  It would easily convert to any cyberpunk / modern game and promises interesting play on a number of fronts:

Oh and I nearly forgot to mention that Swedish Dicks features both Peter Stormare and Keanu Reeves who were last seen together in John Wick 2 (2017) and one of my favourite movies Constantine (2005).