Encounter by Encounter - A Nodal Design View of a Campaign

Nodal Design suits my way of scenario writing and I have explained the concept in articles before but maybe what I have left on the table is a real world example.

In 2019 I ran a Judge Dredd campaign "Tales from Mega City" for a small group of 4 Street Judges using the Starblazer Adventures game system.  The campaign spanned 11 sessions and whilst everyone had a passing familiarity with the two Judge Dredd movies that was about all they knew about Mega City 1.  In this example each encounter is a node with multiple paths or options to their next encounter.

The first encounter does a number of things.  It establishes some characters (namely Judge Belloch) some world lore (weather control, sector 55) a location (Loop Plaza) and two future events (the super duper loop unveiling, the fidget spinner race) which the PCs should be aware of.

The players get to choose which of these events they want to pursue.  Which one they decide to follow is immaterial as whilst they are on their way there they will experience the next encounter.  Whilst some might misconstrue this forced encounter as a form of Railroading, when done in a sidetrek style, the GM has not removed any player agency just introduced another immediate encounter.  In D&D this would probably take the form of a wandering monster encounter or a sidequest.

Whilst heading towards their chosen destination via Megway 5535 (location) they observe 2 Judges who have set up a temporary roadblock.  The PCs decide to stop and chat with them but could easily have passed them by.  The PCs all make observation checks but fail and get back on their bikes and continue on to loop plaza.  This was an opportunity for players to make their first skill check and learn a little bit about the game system.  In my experience if you let players go too long without rolling some dice they become disengaged.

Further down the road they players all get to make another skill check, this time it a Law check.  Judge Holmes passes and gets rewarded with the info that Judge White's left knee pad was on upside down.  Once again it is up to the players what they do with that information.  Holmes decides it warrants further investigation and they return to the scene of the roadblock.

When they arrive at the scene the Judges are gone but their Lawmasters remain. Two security guards flag the Judges down and tell them that the Judges White and Greene requisitioned their van and sped away up the off-ramp to Meg 5527.  The guards also mention that they forgot to tell the Judges that they were carrying an explosive cargo which is sensitive to shocks.  This introduces a sense of urgency to the proceedings.

The players also make a successful Law roll which gets them the hint that this feels like a case of Judge Impersonation and Road Piracy, both serious crimes.  However, the Judges bikes are the real deal which means that there are two Judges to be found and that could be the far more serious crime of Judge Homicide.

This is a lot of exposition but it is vital information which might influence the choices that players make now the are faced with multiple options.  Do they protect the public and chase down the van?  Do they try to find the real White and Greene? Or do they take the bold step of splitting up and doing both at the same time?

One player asks if they can put out an All Points Bulletin (APB) on the van and is rewarded with a solid YES.  They can now focus on the immediate task of finding White and Greene.

A cursory search of the nearby roadside shows a set of tyre tracks leaving the road and entering an overgrown patch of vegetation.  Buried in the undergrowth, out of sight, is a small town car.  Muffled cries can be heard from inside the trunk.  Opening the trunk reveals Judges White and Green bound, gagged and stripped down to their regulation underwear.  The Judges reveal that they were taken by suprise by 2 assailants and knocked unconcious.

Meanwhile one of the PCs investigating the undergrowth spots a rustling in the bushes and goes to investigate.  Parting the branches of a shrub they briefly spot a flash of yellow but the area behind the bush is empty.  This mini event is a piece of foreshadowing and introduces a potential sidetrek involving Pokemon which that PC might choose to investigate at a later date.  Giving individual players their own sidetreks is a useful way of keeping them engaged in the game especially in a "Detective" style scenario where one or two players may be actively questioning Non Player Characters and others are just standing around.

The encounter ends with a call from Sector HQ informing the players that the van has been spotted entering a Through-Way near Thatcher Towers.  With Judges White and Greene found the GMs job is now to get the players back into urgency mode and on the trail of the Jimps and the explosives.  Keeping the players "on plot" by using things such as radio comms or telephone calls is a perfectly legitimate way of reminding them that events they had the choice of following up are still unfolding and now need their attention.

When the players arrive they find the van parked awkwardly on the roadside.  The cargo hold is empty apart from 2 Judge uniforms.  Successful observation checks from the players (it's been a while since they rolled some dice) reveals 4 CCTV cams belonging to Thatcher Towers block with good views of the van.  This naturally leads them to make their way to the block security station and the CCTV recordings.

When they enter the block at level 250 (GM: establishing the scale of Mega City buildings) they encounter the BREXIT political rally and that there is someone called Nigel.  This is another piece of foreshadowing of the real plot to the scenario but it is intentionally glossed over as just a bit of scene setting.  If the players get involved and try to break up the rally then I would have let them do so.

When the players get to the security station and demand the tapes, the security guard tells them that they weren't covering the through-way because they were focusing on the BREXIT rally.  Whilst this is the GM effectively saying "No" to the players, it is the first time and it is backed up with a solid reason.  This is also an example of an event which Must Happen.  The trail of the missing explosives must go cold at Thatcher Towers because their recovery and the possible arrest of the Jimps might lead to future events in the plot timeline not happening.

Before any of the players can react to this Judge Belloch's voice shouts at them through their radios demanding that they get to Loop Plaza pronto.  This ends the session nicely but also reinforces the idea that events are going on around them which don't stop happening because of the choices that they make.  These Timeline Events are always going to be experienced from the perspective of the PCs so you will need to be either flexible about when they happen or the way in which the PCs experience them.  This might in real time, via a news report or in third hand witness statements.  The event still happens irrespective of the players actions.  Similarly if the players had chosen to patrol the Fidget Spinner Race then the message from Sector HQ would have been to attend the race.

When all put together the nodemap for this session looks a bit like this: 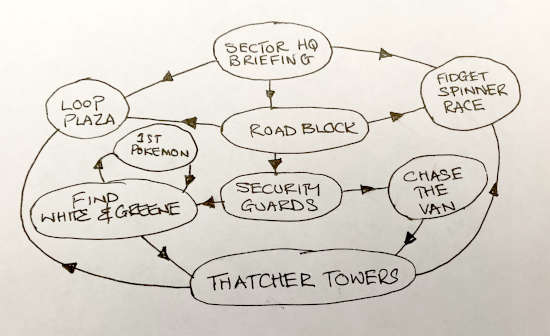 When designing the scenario from scratch you may go through this process multiple times as you focus in on what is important for each session. In fact having a node map at the macro level is useful.  What I like about this particular style of scenario design is that you only need to do the detail work for the encounters that are highly likely to happen.

For example, I knew that there could be a potential shoot out if the PCs chose to "chase the van" and so would need a stretch of Megway battlemap and a few vehicles.  However, this didn't take place so there wasn't much effort wasted and I could always reuse that battlemap another time in another session.

This article was included in the January 2021 RPG Blog Carnival kindly hosted by Plastic Polyhedra.