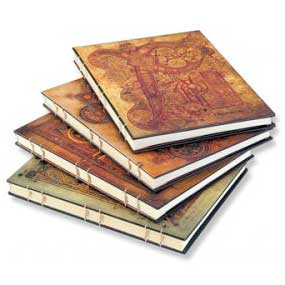 Over at The Tower of The Archmage, Tim posted some inspirational images of spellbooks.  In my campaign world, The Lands of Dual, I've always insisted that players whose PCs are spellcasters, create their own spell books (or in the case of Clerics, prayerbooks) as a physical accessory.

This fits in well with my preference for the "Spell Slots" form of spellcasting, where as long as the spell is in a PC's spellbook (ie: they have indepth knowledge of the spell) and they have an unused spell slot (ie: they have sufficient energy) then they can cast it.  I also insist that the player come up with their own cantrip or rhyme which they recite when casting the spell.

Although some will undoubtedly think that this isn't very fair on the poor player who has to go to the extra effort of creating their own spell book, hang on a minute, there are a few paybacks.

How many times, as a spell casting player, have you had to dive into the rulebook to remind yourself of the spells exact effect or range?  Using this system you can copy out the pertinent stats on a specific spell so you always have your own reference manual.

As DM I can give XP rewards to spellcasters for "roleplaying" their casting attempts.  It's far too easy for spellcasters to get ignored (or just become non combat time specialists) when you're not upfront slaughtering the bad guys and getting XP for combat.

I've always struggled with the notion that if spellcasting characters "level up" in a wilderness, they essentially forfeit any advantage until they can get to a major urban location or meet another wizard to learn new spells and go through the whole "non-game time research" rigmarole which is not always possible to do in a fluid campaign.

Using the spellbook system, "levelling up" just means that you have had a breakthrough and that you have unlocked another level of mastery.  If you already have, or subsequently find, a spellbook containing spells of your new level, you will now be able to "understand" them enough to add them to your own spell book.  To my mind it is only right that mages should covet each others spellbooks, as a font of thaumaturgical knowledge.  Cue a campaign where mages are being rounded up and slaughtered for their books.

"But this might make spellcasters too powerful!" I hear you exclaim.  Not so, there are ways in which you can temper their ability, whilst still making it interesting and challenging for them as players.

Environmental factors can make for interesting play.  One of my players wizards had to cast all his spells from the safety of a trapped airpocket inside a submerged boat during an underwater encounter as he didn't want to get his book wet.

More powerful spells require longer incantations (the length of recital should be in line with the spells casting time) and therefore there is a greater chance that they will stutter or fluff their recital.  This gives you the opportunity as DM to be a little bit creative with the resultant spell effect.  Perhaps that level 5 Magic Missile wasn't quite on target or lacked a little concentration?

There are plenty of ready made notebooks, such as moleskines or the plethora of hand made notebooks, which you can buy off the shelf or from ebay.  Personal organisers (medieval monks used miscellanies which were a kind of proto filofax) also make good spellbooks and have the advantage that you can add pages as you go.  If you're a dab hand with word, photoshop or GIMP  you could create your own page templates and paste in the important data in a fantasy font.