In part 1 and part 2 of this series I looked at Battlemaps and Dungeonmaps which conventionally use a square grid.  Now I zoom out a little bit more and look at options for Regionmaps and enter the realm of the hex.

Regional maps use a variety of scales, my own maps use a notional scale of 1 hex = 50 miles.  Erin Smale over at Welsh Piper has done some amazing work with a trio of hex templates which you can download in PDF and Hexographer format which use, 125 mil, 25 mile, 5 mile wide scales.  Welsh Piper also has articles about demographics and campaign building for a low fantasy campaign and comes highly recommended.  However, the purpose of this series of articles is to explore and evaluate the free (or as near as free as it gets) software tools available to the budding cartographer, and for the purposes of demonstration, I will be using a sample from TSRs HRW2 Kingdom of Nithia a Hollow World sourcebook and the usual 1½ hour (or thereabouts) timelimit to see what is possible.

A free Java based map editor (There's also an offline Pro version available for $24.95) which comes complete with the majority of icons you will find on a standard TSR map.  I have had trouble running this software before on my mac which is notorious for its Java implementation but a quick look in the support forum got me the answer I needed and I was up and running in no time.  The interface is fairly self explanatory and after a bit of trial and error got some great results on the Hollow World map.  I particularly like the option to fill the bottom half of each hex for the "features" such as towns and cities which is so characteristic of the TSR style of regional maps. 9/10 - "Almost Perfect"

Not to be confused with Hexmapper, is an interesting Java application which focuses on a single hex and allows you to drill down to smaller and smaller scales.  Unfortunately the interface is a little cumbersome and there's not much of a manual to go with it.  The colourset the tool uses is roughly similar to that of the sample map, but there is a limited amount of terrain choice and icons to depict settlements.  I'm sure that given more time I could make a good looking detailed map as I learned how to and when to use the various tools.  I especially liked the line drawing functions but it wasn't enough to keep me interested enough to persevere beyond the time limit.  4/10 - "Interesting... but no more than that"

An interesting project from Alex Schröder which generates black and white wilderness hexmaps from ASCII input.  Although it seems simple on the face of it getting the syntax right can be a bit of a challenge and there aren't many feature options.  As an exercise in ASCII to Hexmap it's a bit of fun and I expect it was more of a development challenge than an attempt to create something genuinely useable.  One thing I did like was the oriental caligraphy aesthetic which was most pleasing on the eye.  2/10 - "because Alex could..." 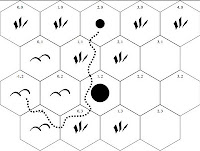 As its name suggests Wildgen is a random hex terrain generator and is an excellent resource for the time-poor DM.  It just generates the base terrain and there's no options to edit or add features such as  settlements or roads, but if you are world building in a entirely random fashion it may have some uses.

I was quite surprised that there aren't that many options out which are cross platform bar the excellent hexographer (which has been around for a while).  Perhaps there are some enterprising HTML5 developers out there who feel like a challenge?

Other Posts in this Series: