Dragonmeet 2011 was held yesterday, as usual, at Kensington and Chelsea Town Hall in the heart London's upscale Knightsbridge.  It's a good venue and is close to the traditional exhibition centre that is London's Olympi and Earl's Court venue's.  Sadly in recent times the Tube Network has suffered from engineering works at this time of year and this year was no exception.  That said there was a good turnout with around 1,000 gamers queing up outside efore the doors opened at 10am.

The venue lends itself to an RPG convention as it offers multiple small halls and meeting rooms where gaming can be broken up into collections of tables thereby keeping the volume levels down so you don't have to strain to hear or be heard.

The ground floor foyer was predominately reserved for boardgames with just one trade stand, the rest being contained in the large auditorium.  The upper and lower foyers and their respective halls being reserved for games tables covering a wide assortment of RPG, Board and Card games.

The game sign-up table, located in the ground floor foyer was the usual chaotic scrum but I managed to get my name down on the game of Toon I wanted to play.  Attending this con over a number of years has taught me to read the game announcements beforehand and to have at least one backup option should your main choice be full by the time you get to the sheet. 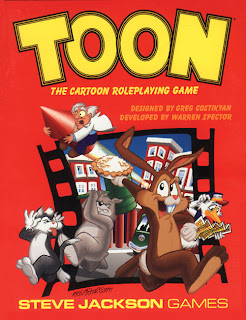 I fondly remember the large full colour ads for this Steve Jackson produced game of cartoon mayhem, which graced the pages of White Dwarf in the mid 80s and it had always sounded interesting so I was quite keen to give it a go.

We were playing the supertoons variant and our characters were appropriately named "Defenders of Toonsville" comprising of myself as THE WEIRDO (a purple alien made of rubber), RABBOT GIRL a robot rabbit girl with an OCD for tidying, MAGIC-I-AM a stage magician with a big bag of glitter, S.C.A.T.MAN A bebop jazz fanatic with an NSFW name and last but not least the scourge of toonsville's criminals, WONDER WABBIT.

The first scene called for our caped cartoon crusaders to find and defeat the evil villain known only as THE DE-ANIMATOR who's dastardly plan was to use goons equipped with de-animator guns to blast the citizens of toonsville, robbing them of colour and turning them into mindless zombies.  The goons had arrived in an egg shaped spaceship which we managed to pilot back to his gothic castle in the desert where I used a plot point to "pull the plug" on The De-animator's plan quite literally by pulling the plug out of the vat containing the black ink which made up his body.

The game system was simple and easy to pick up lending itself to con or one-night game play rather than any serious campaign play.  I found it both fun and intriguing to play as you really have to keep up with the action in the scene or your next action won't contribute to the zany plot.  For example in one scene my character, THE WEIRDO, teleported into a corridor where a light was rapidly approaching with a clickety clack sound (clearly a train), as I had the shape change ability I changed my mouth into a tunnel entrance and promptly ate the train.  Later in the final scene when I was been grasped in one hand by a now giant sized De-animator with no means of fighting back, I opened my mouth and let out the train, punching him in the eye.

I suspect that this is quite challenging to GM as you have to be very flexible and receptive to your players ideas.  I liked that the GM (John Wilson) gauged the success of any particular idea by the volume of laughter around the table and awarded plot points accordingly.  These Plot Points are pretty crucial to the game system as they allow you to produce items, re-roll dice and generally influence the plot and result in some very funny situations.  I shall definitely be playing Toon again and it makes a welcome change from the traditional Sci-Fi and Fantasy RPGs I normally GM and play. 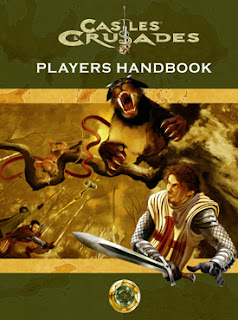 Having run my first C&C campaign for over 30 sessions now, I thought it was high time I played in a game partly to see if my GMing of it was up to scratch and partly to play an FRPG I was familiar with in a con setting.  Unfortunately I arrived at the table last so had the Hobson's Choice of pre-generated characters, a 1st level wizard.  I hardly ever play wizards so this was going to be challenging.  The scenario was GM'd by Gareth Larter (who also happens to be the Dragomeet Webmaster) and I was pleasantly surprised that he had also chosen to abandon the (IMHO) overly restrictive Vancian magic system in favour of a spell slot style system.

The Beacon at Enon Tor was a dungeon crawl in and around a large tower on a cliff-side promontory which acted as both a lighthouse and a wizards laboratory.  The concerned townsfolk had hired the party to find out why the fog horn had been blaring for two straight days (long after the fog had lifted) and then had suddenly stopped.

I have always felt that I made a poor tactical player, and an even worse wizard.  However, in this game I ended up playing extremely tactically, particularly in the use of a simple hold portal spell to prevent the escape of an orc and to get the drop on a bugbear.  Perhaps my recent campaign sessions watching my own players struggle in tactical play has had an effect on me, I don't know, but I really enjoyed the game as a consequence.  The rest of the players also enjoyed themselves and at least one descended into the dealers hall to try to pick up a copy of the PHB.

THE INDUSTRY IN RECESSION?

Sadly this year there were no goodie bags stuffed with freebies and all the trade stands seemed to have shrunk somewhat in the volume and variety of games they brought to sell.  Perhaps this is sign that the industry is in recession or more likely that it's customers disposable income is shrinking and dealers are responding to this.

Unfortunately my game schedule meant that I was unable to attend many of the peripheral events such as the Discussion Panels from the attending industry celebreties such as Ian Livingstone or the aftershow auction.  Nor did I manage to take any photos this year, however Big Lee has put up a few of his photos on Big Lee's Miniature Adventures which give you a taste of the atmosphere and scale of this event and I recommend that everyone who is a London based gamer should aim to visit next year.
Posted by Tony Bro001 at 14:24