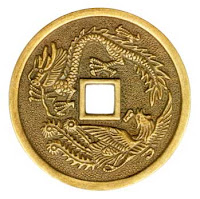 Irrespective of your particular flavour of FRPG the Gold Piece is one of the defacto fantasy standards, and is accepted the world over (whichever world it is that you play in).  The implicit reliance on a Gold Standard, the intrinsic value of gold itself, means that a GP acquired in one nation has an equivalence to one acquired somewhere else ensuring trade is not stifled and that PCs can still buy what ever they need irrespective of what nations coinage they choose to use.

But what if that wasn't the case, some interesting plots and fun could be had from playing around with the Gold Standard and the ubiquity of the GP

1.  Gold is Commonplace - The Gold Standard only really works because gold is rare and therefore valuable.  In a society where gold is commonplace its value will be reduced and some other rare commodity will take its place.  This concept is explored to a degree in post-cataclysm Dragonlance where steel currency replaces gold.  However, this is the case throughout Krynn rather than just single region.  Consider a party visiting a nation which has access to vast amounts of gold (like the conquistadors encountering the Atecs), the PCs will no doubt struggle at first and will need to convert their existing wealth into whatever is used as the local currency.  Greedy PCs might try to exploit the difference in commodity prices by frequent trips across the border which could bring them to the attention of local law enforcement or worse border bandits.

2.  Not Legal Tender - Imagine that two bordering nations are in dispute over something or other and their respective governments refuse to accept their neighbours coins as legal tender.  A coin minted in one nation does not automatically become worthless on the other side of the border, as it still has an intrinsic value thanks to the gold standard, it just becomes really hard to spend it and stay the right side of the law.  Local law enforcement may be on the lookout for strangers trying to infiltrate or subvert the locals with coins from across the border.  PCs may be forced to turn to the blackmarket in order to buy simple provisions.  They could even be approached by criminals offering to launder or re-mint their illegal coinage for a fee.

3.  This gold's been watered down! - We've all seen those pirate movies where a character tests a coin by biting into it.  This crude form of assaying tests that the coin has the correct amount of gold in it, but if a nation state changes the amount of gold in its currency this be reflected in the gold standard for that currency.  For example Nation X is going through tough times financially and its unscrupulous leader decides to change the gold content in the GP it mints.  Everything goes swimmingly until import prices start to go up and the population is in revolt.  Enter the PCs with a fat wedge of foreign "pure" gold and suddenly the corrupt local sherrif is looking at ways he can relieve them of their burden and smelt it down for a fat profit.  However, the local sherrif might be the least of their problems if the Thieves Guild's coin clippers and forgers find out that they're loaded.

4.  Ripped Off! - Wandering into a town over the border can get PCs into all sorts of trouble when they are trying to spend unfamiliar coin with the local merchants and their chances of getting ripped off increase dramatically.  Any difference in size or shape of a coin will result in differences in the coins value and exchange rate.  One nation's GP might be twice the thickness of anothers and therefore worth twice as much.  The first time they get a handfull of change, they might be pleasantly surprised or falsely accuse a merchant of ripping them off.

5.  Accused of Forgery - The Gold Standard ensures that the intrinsic value gold is preserved but that doesn't mean that the local merchants gleefully accept foreign coin and trust it like their own.  They might try to take advantage of the situation and accuse the PCs of forgery, particularly if they are using coins acquired from a distant land and not a neighbouring one.  If the case goes to trial the local magistrate may be in on the swindle.  This is also where an Adventurers or Merchants Guild can provide a valuable service to its patrons by operating a coin exchange program, for a fee of course.
Posted by Tony Bro001 at 09:00