Trouble in Somerlisse - Part 3 - The Quarry at Lier

Trouble in Somerlisse is a Savage Worlds campaign using the Hellfrost setting. The Games Master is Mark Hamilton and play takes place every Friday night at Dragons Keep Roleplay Club.

The Quarry at Lier

Our heroes have been tasked with a most urgent mission. They must find the source of the poison which afflicted the Ridder's daugter Aylsluf and the quarryfolk of Lier. They don't know how long these people have and the urgency of the mission weighs heavily on their minds. Athura assembles a quick breakfast and they head out.

Passing by the gaol hut they notice that the door is ajar. They rush in to find the orc lying dead on the floor still chained to the post but with his throat slit. Someone has murdered him in the night.

and casts a knowing glance at Vissarel.  Athura sighs, says a quick prayer to the Goddess Eira and replies "It is done and there is naught we can do but focus ourselves on the task at hand, saving the people of Lier.  We must hurry"

Athura's words kindle a new sense of urgency and they ride out with haste on the snowy path to the quarry.

It is not long before the path through the hills gets more rocky and they must dismount to lead their horses on foot.  By late morning they crest a hill to find the valley of Lier stretched out before them. 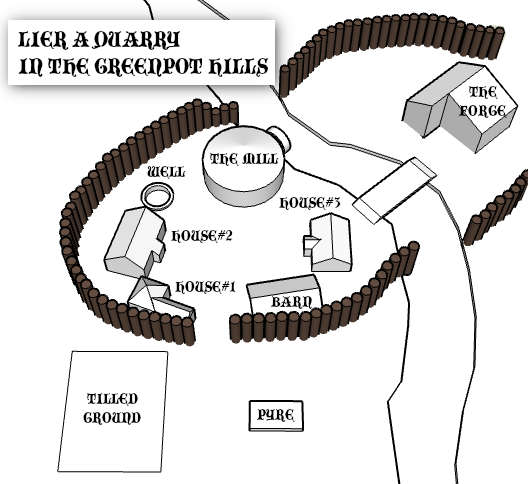 200 yards outside the stead on the left hand side of the rode lies a small patch of tilled ground which must be where the quarryfolk grow food. The ground is frozen into neat littel rows and furrows but the shape of a dead body is clearly visible in the snow in the snow.

Thingol dismounts and approaches cautiously. He brushes the freshly fallen snow from the body and discovers a man lying face down in the snow, naked from the waist down.

“Thingol what do you see?” Arthura demands. He turns over the body, there are no signs of obvious wounds. his eyes are open and his face contorted in agony. One leg is frozen solid from the mid calf Down. He is missing one leg of his hose, he didn't die of exposure, he died of a sudden extreme exposure to cold.  Searching nearby Vigo find his missing clothes with some money, a travelling bag and a short bow. Vissarel thinks he has been exposed to cold fire, magic quite a powerful frost mage spell or a breath weapon from a hell frost dragon.

Thingol and Arthura carry the corpse and place it on the large funeral pyre standing just outside of the palisade. Someone had been preparing to burn many dead here judging by the size of the pyre and the many booted prints surrounding it. Despite being covered in last night's snow they are clearly visible and could be from one or more of the quarryfolk, it is hard to say for sure.

Vigo and the Vissarel take the horses and investigate the barn inside the pallisade. It contains some livestock, sheep, goats, chickens, sacks of grain and the body of a dead goblin. It has been beaten to death and there is plenty of blood on the ground. The animals keep their distance from the goblin and seem content to munch on spilt grains and straw. As Vissarel ties up the horses, Vigo takes the opportunity to check the dead mans travelling bag. It contains some dried meat, snares and other small items consistent with that of a woodsman trapper or hunter.

The team briefly unites at the barn and share what they have found. The quarry looks deserted and they agree to split up and cover more ground. They need to make this place safe quickly. Thingol and Sister Athura head for the first house just inside the pallisade walls. It has been ransacked by something, probably goblins. They scour the ground floor for evidence of poisoned food and collect some scraps in a sack.

Vissarel crosses the snow to the second house. She is stopped dead in her tracks by an ice zombie who bursts out of the snow to attack her. It whirls its clawed hands at her but misses and is inceremoniously sliced to pieces by a flurry of air daggers unleashed from her hands with elemental wizardry.

Vigo checked out house number three and finds it is in good order. It has not been ransacked and he spends some time rifling through the owners precious items before uncovering a shard of fired green pot clay. "Didn't someone say this stuff is valuable?" he mutters to himself.

The sounds of conflict bring Athura and Thingol running to Vissarel's aide but as they arrive Vissarel is dusting off the remnants of the snow that showered her when the zombie attacked. She can handle herself well if need be. The Engro is nowhere to be seen.

The group approaches the water mill, outside its walls the snow has been disturbed by lots of footprints. Thingol opens the door and is surprised by five goblins who immediately attack. Vissarel kills two with a flurry of air bolts. Athura pushes past the paladin and attacks a third with her mace a solid hit which momentarily shakes the creature.

Thingol boldly strides straight into the centre of the mill and casts a trio of fire bolts one bolt for each goblin. They all strike their targets but he only succeeds in shaking two of them who recover immediately. Athura brings her mace down on the head of one near her killing it. She apologises to the goddess.  Vissarel lets fly a trio of air stars which wheel around the big frostborne paladin and slam into their targets stunning them.

Thingol attacks the remaining goblins with his warhammer but today luck has abandoned him. Vissarel weaves the elements together into a great spear which shoots across the room impaling the pair of goblins onto one of the mills supporting wooden beams.

As the magic dissipates they slump to the floor quite dead.