Meanwhile in Mega City One is a roleplaying game which takes place every Friday Night at Dragons Keep Roleplay Club in Chislehurst, South East London.

Confronted by seven vulnerable young girls Judge Cully does not call it in.  She tells the kids to be quiet and stay hidden.  She then returns to the patrol and tells them that the stairs led to a lab whihc was destroyed.

Pike calls in a meatwagon to bag the perp and they head off to follow up on their other cloning lead Dr Steve Ein.

At 1800 hrs they find themselves outside the door of apartment 118-1.  Swiss knocks on the door and Dr Ein lets them in.  Krush immediately starts scanning the apartment for drugs and guns.  Pike checks out the nearest door which opens into a walkin closet.  Swiss and Cully interrogate Ein. 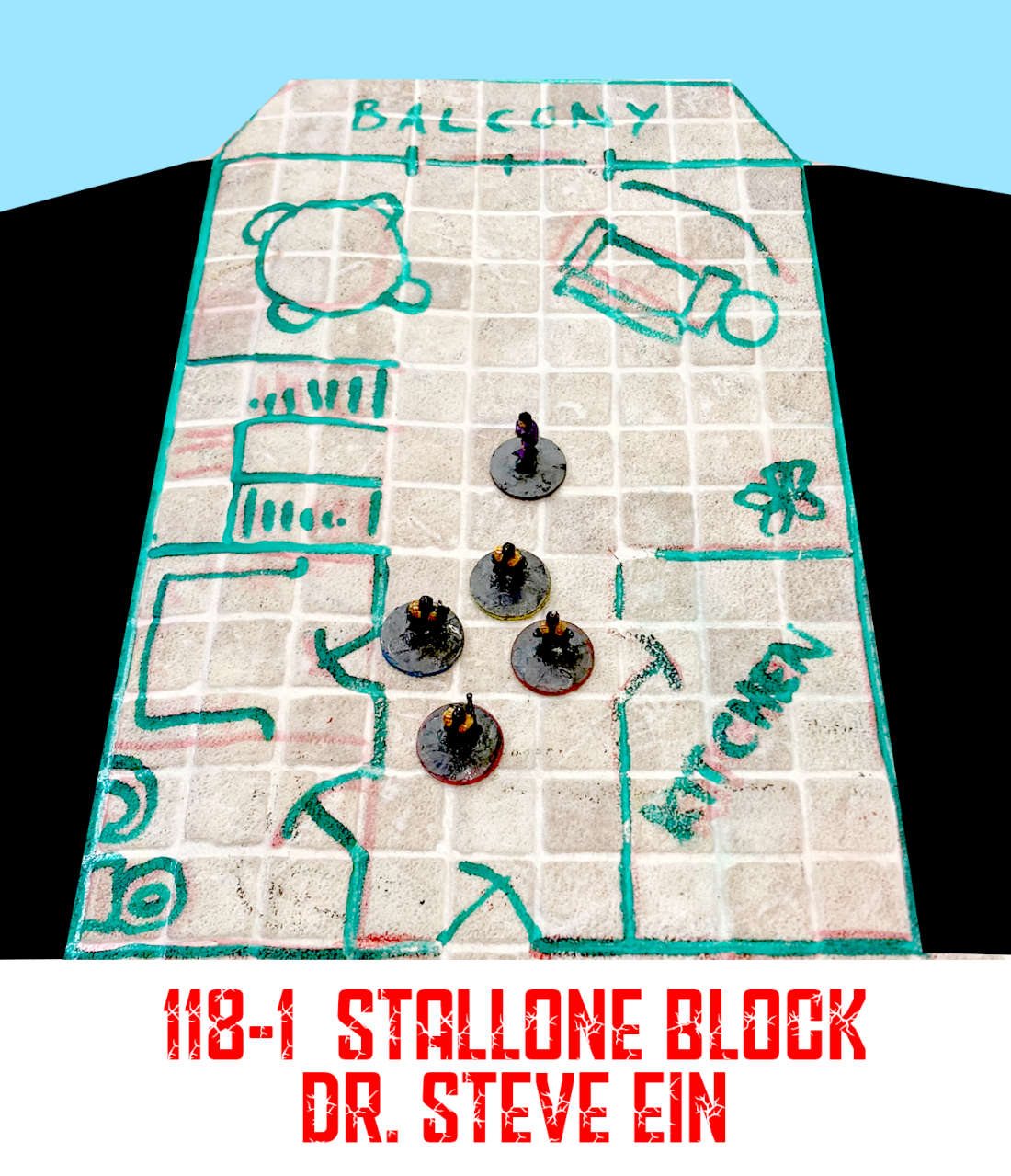 Dr Ein is a very cooperative citizen and tells them that since being released from the isocubes he has not been contacted by anyone to undertake any cloning work.  He has done some freelancing for Prof. Ose over at the Felix labs where his knowledge of the Quantum Recombinator 3000 was useful in synthesising some Pineapple DNA but other than that he has been largely unemployed.  He offers up a couple of names Dr Hideki Pho and Danish Tokopi who would have been able to clone a cat.  Pho died a few months back when he cloned a wooly mammoth which then stepped on him.  His assistant Tokopi was arrested and is currently in the isocubes doing a long stretch.  Funny thing is that the mammoth was only supposed to be 8 inches tall not 8 metres tall.  It survives in the Alien Zoo and is apparently quite the attraction.

He asks who gave you his name and proceeds to go on quite the rant about Dr Rank's abilities in the field and how he would clone his own grandmother if there was a cred in it.

Satisfied that there is nothing of interest in the closet Pike proceeds to mind read Dr Ein and confirms that he knows nothing about Miss Wildenstein or Mr Blofeldt.  His story checks out.

On the Balcony Judge Krush spots a perp liberally dousing an aprtment in Chan Block opposite with CHOO2 from a jerry-can.  The punk is wearing Cobra colours (a Stallone Block gang) and clearly this is a prescursor to a full scale Block War, so he calls it in.

Pike proceeds to check out the upstairs rooms.  As he enters the bedroom he sees a figure dressed similarly to Dr Ein wearing a leather flying helmet clamber over the balcony balustrade and fall with a scream.

On the lower floor Krush, Cully and Swiss see a black shape fall from balcony above and dissapear out of sight.  Moments later with a woosh the figure opens his arms revealing bat wings and he floats away gracefully.  A batter.

Dr Ein comments "that that was my brother Dave, he doesn't like people and so he often goes batting when I have guests round."

Swiss checks with MAC and confirms that the residence houses two Ein Brothers.

An H-Wagon turns up outside Chan Block.

"Put the can down punk and put your hands in the air, you are under arrest for attempted arson"

"Loose the shooter scum and we'll take you in alive"

The H-Wagon strafes the CHOO2 soaked appartment with it's cannon and it promptly explodes.  In moments it is reduced to a smouldering ruin.  Floating over to the balcony where Judge Krush stands surveying the scene, a head pops out of the commanders cupola, Judge Luminum exchanges words with Krush.

"Good call Krush, we are seeing more activity from these gangers and expect things to get real drokkin dicey in the next couple of days."

As they wrap up their investigation and head back to the sector house a passing advertising train blares out an advertisement.

Back to the Sector House

As they roll into the motorpool Judge Belloch greets them and asks Cully and Krush how the new recruits are doing.  He also asks if they found any evidence of other people living at the Rank residence as the Forensics team suspects there were 6 or 7 people living there.  Cully says no just the one perp who they put on ice.  Belloch tells Pike that Judge Quincy is expecting them in the morgue.

Down in the morgue Judge Quincy leads a team of dedicated pathology lab full of Med Teks who are skilled in Foresensic Science.  He claims that the Wildenstein woman was attacked.  She had signs of mild strangulation possibly by a pearl necklace and that under her fingernails were skin fragments which suggest she may have scratched the face of her attacker.  It's definitely murder.

Swiss opines that maybe Wildenstein had an agent and proceeds to scour through her email records.  He comes up with a name Jerry MacGuire and the address 483-26 Trump Tower.

Cully suggests that tomorrow they go back and see what Slute and Flute have uncovered.  She retires to her dorm room and looks for possible orphanages to turn over the seven girls to.  Miss Hannigan's Home for Waifs and Stray's looks promising and is nearby in Ozzy Apts.