Wallace leaps on to cab of heavy hauler 4.  Que races along the right side of hauler 3 and Steele muscles his bike into line behind the stolen spinner but his line of fire is is blocked by a truck.  Holmes moves up to the ladder on the left side of hauler 3.  The Spinner brakes sharply crashing into the truck behind shredding bodywork and rubber across the megway.  The truck swerves violently into Holmes and pushes her bike forward.

Wallace climbs down onto his Lawmaster as Que climbs under the tarpaulin of a second spinner and fires it up its blades which shred straps and coverings like confetti in the wind.  Steele fires his Lawmaster cyclops laser punching a huge hole in the spinner causing it to shed one of its 4 huge blades which embeds intself in the side hauler 3 taking out a pair of tires in the process.  The haulers crew try valiantly to keep the truck in lane as it drifts lazily to the left.  Holmes radios Wombat ahead and tries to get the attention of hauler 3's driver .

At point blank range Wallace blast the spinning death machine with his cyclops laser and the bubble dome cockpit starts to fill with smoke.  Using his bike's PA system he cites the driver with the crimes of Road Piracy, Armed Robbery with Violence and Driving without Due Care and Attention.  The perp gives Wallace the bird.  With a whine of turbines, Que drives her requisitioned spinner off the flat bed of hauler 3 and slams into the stolen spinner locking blades and slams on the brakes.  the spinner acts like a huge anchor slowing them both down.  Holmes cuts across four lanes of traffic and doubls back down the hard shoulder to aid the crashed and shredded vehicles left in the wake of the spinner.  The convoy's procession towards the Omni Dome is unabated and now unescorted.

Wallace pulls down his respirator and climbs aboard the stolen spinner to unlatch the canopy.  He drags out an unconscious 40 year old male wearing a Banzai Institute jacet and a FIDGET World Series T-Shirt.  Que shuts off her spinner and gets out calling her bike.  Steele climbs up and switches the stolen spinner off.

"Where the hell is my escort!" shouts Wombat, "Give us a minute" responds Wallace.

The sirens of H-Wagons and Meat Wagons approach.  Wallace cuffs the perp to the FIDGET Spinner, he is wearing a corporate ID lanyard which says his name is Derek Wibley, the Team Principle of team Banzai.

When he comes around he explains that "This was just a pre-race rumble to get the fans excited".

Wallace retorts "There will be no rumbling for you!"

The judges mount up and rejoin the convoy.  The rest of their escort duty is uneventful.
When they reach the Omni Dome a huge crowd and press pack are waiting as the trucks roll into Park Ferme.   Holmes surmises that this was some form of inter-team espionage and whilst the agitated Wombat talks to race officials, the judges proceed to the pits and confront Team Banzai.
team one that states the judges proceed to team banzai is that the person in charge is a mechanic called Jonah Louie The team are uncooperative and Wallace arrests them all for Obstruction of Justice


Que spots an orange dragon about 2 foot tall walking behind the pit lane.  She follows but it spots her and runs off into the undergrowth.  She gives chase and enters a clearing, there is no sign of the dragon, just a male young person wearing a red jacket, white T-shirt and red cap.  She asks where the creature went, he says he doesn't know.  She says if that she doesn't want to see him loitering around here again.  The boy says okay and runs off shouting "Gotta catch 'em all!"

Their shift ends and the Judges return to the Sector House to fill out their paperwork and hit the hypersleep pods.  Holmes takes time-out to make her way over to the La Cucarracha bar in Jessica Alba block.  Her narc Vinnie the Spiv is propping up his usual spot at the bar and Holmes orders a synthi-orange and a mint julep. 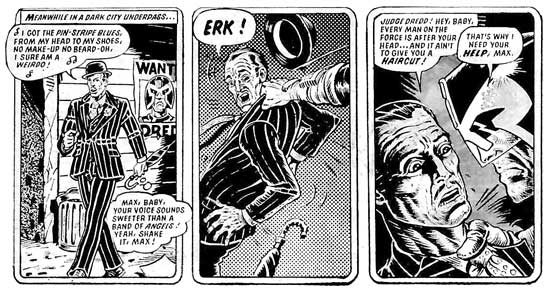 A New Day a New Briefing


During the briefing the next day Patrol Chief Belloch tells them that they did a great job yesterday.  There were only 55 citizen fatalities at the Super Duper Loop Plaza and 47 on the Megway.

She also states that there have been numerous sightings by other patrols of small aliens in the sector.  Que adds that they appear to be getting help or being chased by humans.  A boy in a red cap has been seen chasing the aliens.  Belloch suggests that she visits face sketch artist Judge Ross.  Not long after an APB gets put out on the boy.


All the Clues Lead to City Bottom


Closing down leads in the Nitro-9 case is imperrative and the Judges head to Surveillance Command to inspect footage of the Thatcher Block Thruway and other nearby CCTV cameras.  With a bit of help from Barney they ascertain that 15 vehicles, all registered to Thatcher Block residents, took the off-ramp but none of them were commercial.  One vehicle, a van registered to Fratellis Pizza, spent 15 minutes too long in the tunnel before exiting.  The business is located at 101st street and 76th Avenue, city bottom.  The judges requisition a Nitro-9 calibrated sniffer and head to Fratelli's Pizza arriving two hours later, it is clear even in the darkness of city bottom that this warehouse has been at abandoned for some time.

Que gets out the sniffer and scans the buildings exterior for signs of Nitro-9.  Wallace spots a suspicious looking citizen carrying a suitcase walking hurriedly away.  Giving chase around a corner Wallace shoots a warning shot over the guy's head and he stops.  When questioned he says his name is Melvin Twaddle, he tries his best to hide the suitcase which is overflowing with comics.  Wallace tells the perp if he gives him information about the Fratelli's van he'll let him go.  Twaddle says he hasn't seen the van in a couple of weeks but the Juves who buy some of his comics might know, perhaps Nelson Sponge.  Beligerently, he gives up his suitcase as Steele scans his fingerprints on his bike computer.  Twaddle has numerous previous convictions for dealing in comics, he complains that this is his personal collection and it's taken years to collect he doesn't know what he'll do without them.  Wallace secures the suitcase to his Lawmaster, activates anti-tamper mode and consoles Twaddle with words of encouragement

"For every citizen there is always the hope, however remote, of employment"

Whilst using the sniffer Que spots tire tracks going in and out of the Fratellis warehouse garage through a rusty and graffiti covered roller shutter door.  An infrared control box is fixed to the wall nearby.  The judges decide to gain covert entry to the building and Steele begins pulling boards off of a window on the corner of 101st and 76th.  Punching through the thin glasteel he reaches through unlocks the window and the judges climb into the dark interior.