M is for Mayfair Games founded by Lawyer Darwin Bromley in 1980.  This small games publisher branched out into RPGs with the help of veteran Bill Fawcet and began publishing their "Unofficial" AD&D / D&D / T&T compatible adventure modules like 1982s Question of Gravity under the Role Aids banner.  Their attempt to steer through the copyright minefield by using the coverline "Advanced Dungeons & Dragons is a trademark of TSR Hobbies, Inc. Use of the trademark NOT sanctioned by the holder." they eventually fell foul of the changing attitudes to product licensing at TSR. 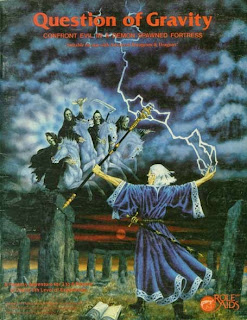 Looking at these modules through OSR spectacles they are refreshingly light, yet ambitious and Question of Gravity in particular has a quite unique take on the traditional dungeon.

The cover art (by Fantasy author Janny Wurtz) does not allude in any way to this singularly impressive locale which is the focii for this scenario...

The interior maps are an impressive feat considering the lack of digital artistry back then.  I saw something similar nearly 20 years later in Issue #86 of Dungeon Magazine which was a Tracey Hickman Dragonlance scenario called "The Anvil of Time" but this was only one room not a whole dungeon.

Grids are notable absent from the maps, this was the 80s after all, where play was freer and not concerned with tactical movement, flanking or god forbid Attacks of Opportunity!!  The room (or should I say platform) descriptions oddly don't have the tried and tested "read aloud to the players" boxed text that we have all come to know and love in our pre-written dungeon crawl modules, but in this case I can understand.  Enemies can come from any direction and the mind boggles at trying to replicate this on a tabletop grid.  The descriptions are brief and designed to give a flavour of what you may encounter, the salient points rather than detailing the minutia.

Whilst these modules are rare, they are still available in all the usual places, and they may well prove to be an unexpected and inspirational distraction for your players.  I know that I've got plans for using the cube in my own campaign world.