I was so incensed this morning with Apple's ridiculous Apple ID security questions and the lack of sensible choices it provoked me to ranting.

When offering choices for security questions they have to: 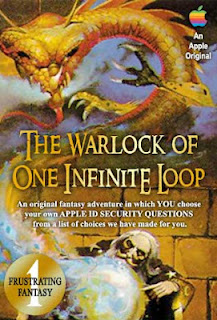 1.  PROVOKE CONSISTENT ANSWERS - The best security question always has only 1 answer and a person should be able to answer with 100% reliability consistently.  Asking someone "What is your favourite car you have owned?" may have an answer which changes over time, you could easily buy a new car next week and your preference may change.


2.  PEOPLE FORGET - Fact is we are all getting older and our memories fail us, so asking a teenager "What is the name of you first teacher?" will likely provoke a consistent response more frequently than a 40 year old.

3.  PEOPLE HAVE DIFFERENT EXPERIENCES - Even though we are all sharing in this global digital experiment they call the Internets, our personal experiences are different depending on our age, sex, nationality and culture.  Ask a person from India "What is the first car you have owned?" and they may never have owned a car.  If subsequent question choices always contain one car question then you have dramatically reduced their options for selecting a question that they can reliably answer in a consistent fashion (see 1 above).

4.  IF YOU'RE GOING TO FORCE PEOPLE TO SUPPLY 3 DIFFERENT ANSWERS DON'T HAVE QUESTIONS WHICH CAN PROVOKE THE SAME ANSWERS - If you ask "What was your first car?" and then in another question "What was your favourite car?" don't be suprised if people choose the same answer!!  They may have only ever owned one car, but more importantly people often have a fondness for their first of any experience.  I can remember the number plate of my very first car almost 20 years ago yet I can't remember the number plate the car that I own now!!

What annoyed me most is that there was simply no reason for this to happen, and it wouldn't if Steve Jobs had gotten wind of it.  The content of the question and it's answer are entirely irrelevant and merely exist as a way to provoke a validateable response in 100% of cases.  Therefore the only logical method is to is ask your users to write their own questions and answers and not to force them to choose between your choices in an Adventure Gamebook style!
Posted by Tony Bro001 at 13:17 No comments:

On Good Friday I stepped into the breach to run a filler game whilst our regular DM was absent, and I used the opportunity to complete two firsts. One was to run a game of TOON RPG, which I enjoyed playing for the first time a few months back, at Dragonmeet 2011 and the other was to attempt to GM my first session using an iPad. 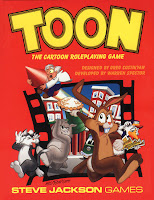 Having only played TOON was no real barrier to GMing, but I did kind of struggle with writing the scenario until I found THE TOON ADVENTURE GENERATOR in my copy of TOON SILLY STUFF.  Clearly, I was overthinking this whole thing and as I recalled the game I played, the players pretty much drove the whole plot with their character choices and actions.  With this in mind I just came up with the plot synopsis:

I grabbed an image of a farmyard from googleimages and drew a rough map in inkscape to give the players an idea of what was on the farm.  This then gave me enough to start fleshing out some of the zones to give the players enough ammunition (literally) to see off the bad guys.  This was then converted into a PDF and loaded onto the ipad.  A quick search of the interweb rustled up MP3s of the opening and closing credits for Looney Tunes which would help get my players into the mood.  I also stumbled on a great site with some free sound effects (http://www.freesfx.co.uk/) which I hoped to use during play and these were installed in the usual way via iTunes.

I've been trialling a few RPG apps on the iPad (which I'll cover in another post), but the most useful ability is to read and annotate PDFs and after a few false starts I found eDocReader Multiple PDF.  As the name suggests this app allows you to open multiple PDFs at the same time as tabs in the same application, allowing you to have a copy of the rules open as well as your scenario.  The simple annotation tools enable you to make notes directly onto your scenario by either typing or writing with a finger or stylus.

The game ran very smoothly which was surprising as all my players were TOON newbies, but from the opening credits to the "that's all folks" they let their imaginations run riot.  The PCs were a duck billed platypus in search of a mate, a dumb but incredibly fast guard dog whose kennel sat atop a subterranean hi-tech lair, a machinating pig who had been ordering ACME products for years and last but not least a bull whose sole mission was to impress the 5 dairy cows with his muscle poses.

All the classic cartoon capers occurred; the pig dressed up as a female Martian to woo the bad guy into eating strawberry looking grenades, the bull became enraged by anything red and broke open the yellow barn to reveal an Indiana Jones style warehouse full of ACME crates, the platypus dropped a gigantic fake bomb on the pond squishing the piranha and the dog and his Martian double ended up having one of those cloud fist fights.

However, the playback of MP3s in the Music app was troublesome, particularly having to stop the iPad from playing the entire playlist.  There are lots (and I mean lots) of SFX pad apps in the appstore but no free ones that allow you to allocate your own custom sounds to buttons as triggers (please correct me if I'm wrong).  I am also on the hunt for ways of embedding sounds into my scenario PDFs so I can play them back from within the PDF Reader as I read out the relevant description text.

Although this first experience wasn't an unquallified success, the main advantage with the iPad is that you can GM with just an iPad and a few player handouts, so the days of carrying whole libraries of books around with you everytime you want to run a game are definitely over.  My new motto from now on will be "Have iPad... will GM".

You can download the Save The Cows Save The World PDF for free if you want to try running this game yourself.
Posted by Tony Bro001 at 16:14 4 comments: Links to this post